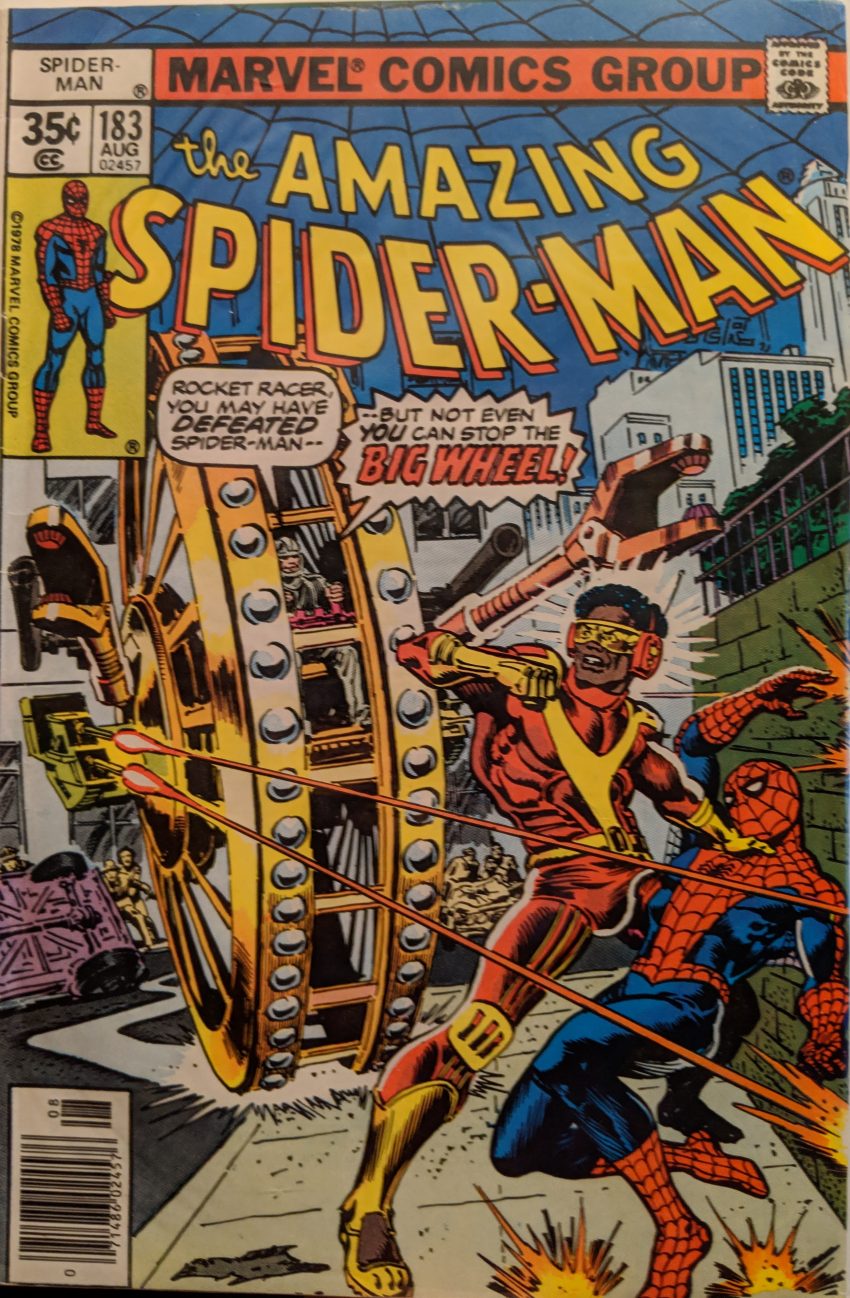 I mean, you already know, right? Does the comic even have to tell you what this is if you saw last issue? Well, it’s gonna. We pick things up with Peter Parker… going to class? In his Spidey suit?

What about MJ? Did she say yes? I would remind the court this is Marv Wolfman’s SECOND ISSUE. He didn’t waste time. Meanwhile, “Jackson Weele,” the guy from last issue, goes to The Terrible Tinkerer to get revenge on Rocket Racer.

Well, that’s wildly uncomfortable. What were people thinking back then? And what is with that guy’s chin? Too much chin! Cut to Peter going to visit Aunt May’s hospital room, but here’s the thing: Rocket Racer is in there, you see, with his sick Mom, who shares a room with Aunt May, and who he’s blackmailing Weele to help. So, after getting hassled by the doctor who always tells Peter he doesn’t care about Aunt May (What a jerk!)…

Look at this idiot. He’s gonna kill his aunt! Robert (Last name unavailable) takes advantage of Spidey’s confusion and general stupidity to club him with a chair. Spidey throws him out of the room, and now he can go change to Rocket Racer. Cops rush in to fight Spider-Man, and then it’s a real mess.

“I will attack you by… putting my face in your stomach!” Ross Andru seems to have a very solid grasp on anatomy, and to be really good at drawing people in normal human situations, but when the action starts, things get really awkward. Both guys ironically fight to get the other away from their beloved mother figure. The fight moves out the window and onto a bridge, where friggin Big Wheel shows up.

Yes, Weele has gone and gotten turned into an even sillier villain than Rocket Racer. One wonders what other client of Tinkerer’s was trying to get a giant wheel. This feels more suited to a 60s Batman comic. It becomes a fight between the two goofy villains, with Spider-Man mostly trying to make sure no one gets hurt before cornering RR on top of a building.

They’re fine, of course, and when Spidey rolls them out of the way, Big Wheel stupidly drives off a pier by accident, sinking into the river. Spider-Man can’t find him in the murk to save him. You’d hope that would be the last of Big Wheel, but you’d be wrong, of course. Anyway, Peter heads back to the hospital to see Aunt May, but she’s been moved to critical condition after the fright that awful Spider-Man gave her. Oops. Pete’s rightly feeling like a real jerk when Mary Jane shows up to rejects his proposal. In a hospital. While Aunt May is dying or whatever.

Real cool, MJ. Real cool. I mean, obviously, she doesn’t have to marry him just because he wants her to, but she made a special trip down to the hospital to crush his soul? While his Mom is dying down the hall??? MJ is supposed to be a party girl, not a monster. But, let’s back up a bit, what happened last night? What, he put the ring on her hand and she said… nothing? “Lemme think about it?” And Peter ran off just assuming she’d say yes? Could this possibly have been handled worse? Terrible storytelling. There’s a reason Jim Shooter came in and abolished the Marvel policy of letting the biggest writers be their own editor. And who’s that at the end, there? We’ll find out immediately next issue. One kinda gets the feeling Wolfman is clearing the deck so he can do his own thing. That feeling will continue in coming issues.