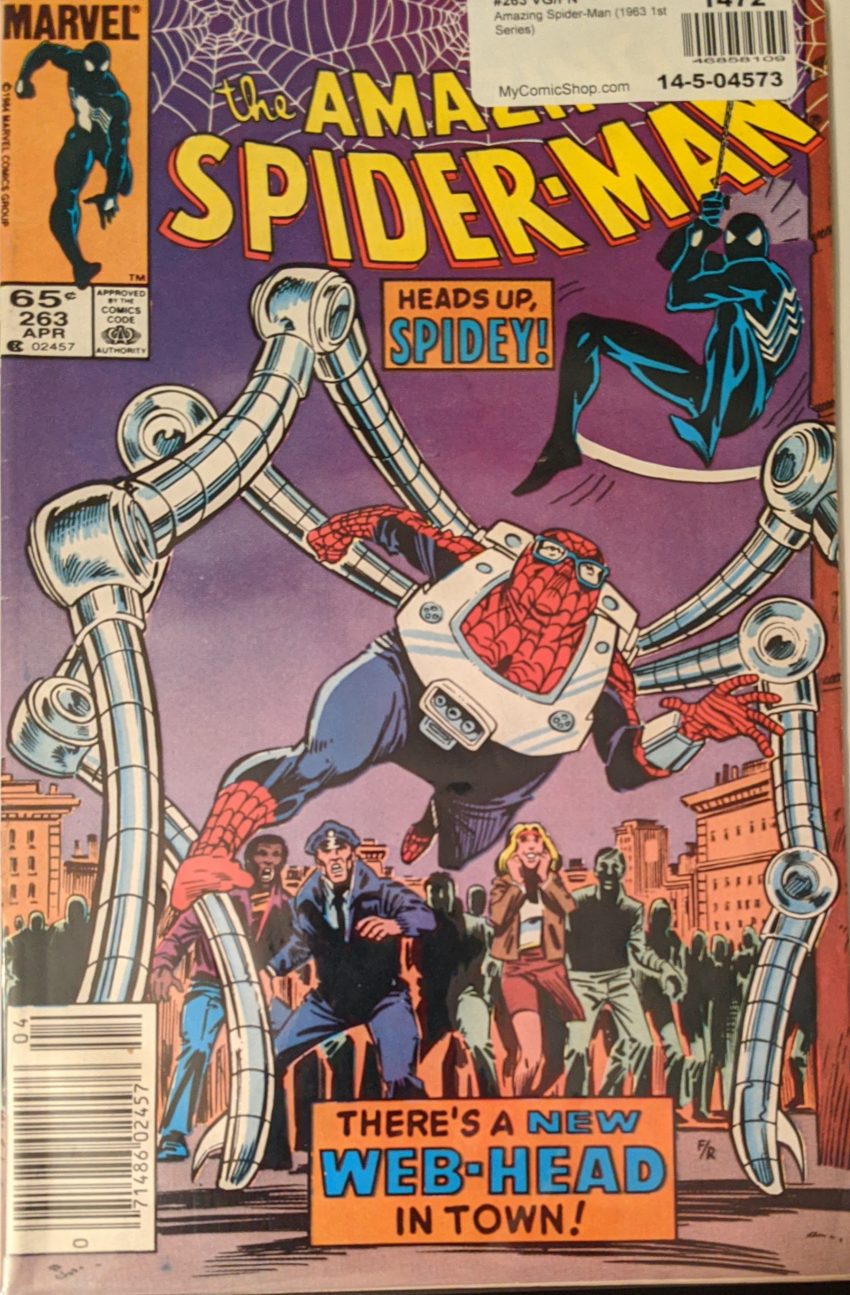 Man, is there a less dignified way to come back to this era of ASM? I don’t think so. Tom DeFalco came in pretty strong after Stern, doing a pretty solid job of maintaining the quality level (In the writing, at least), but in my opinion, things taper off pretty dramatically. I mean, Exhibit A. It’s Defalco, Frenz, Brett Breeding and John Beatty sharing inks, and good ol’ Bob Sharen coloring. Obviously, this is that kid from Spectacular 72 with the ludicrous, functional Doc Ock arms, who’s seen the light and begun worshipping heroes instead of villains, and… /sigh. This.

Someone should catalog all the ridiculous, Warriors-style street gangs of Marvel New York over the decades. Lucky for young Ollie Osnick, the cops show up, scaring off the goons. Ollie flees the police because that’s what Spider-Man would do, and has soon decided he foiled a mugging and Spider-Man would be proud of him. Must we do this? Meanwhile, Spider-Man is swinging around with Black Cat, because they haven’t broken up yet, even though this book was published a month after their breakup in TAC 100, because no one is watching anything while Danny Fingeroth is editing these books. But they’re just about to break up, as a fight over her keeping secrets ends as they always do, with her refusing to talk and leaving. Spidey’s recap this issue is probably helpful since it’s been a long time since we looked at any comics from this period.

Spidey gets home and decides he smells terrible. He grabs a snack, soaks his costume, worries that he still hasn’t patched things up with Aunt May over him dropping out of school, and goes to bed.

What indeed? Nice headband, Jane. In more interesting news, Peter Parker arrives at the hospital Liz is in and finds Harry, just in time for Harry to be told Liz is going into labor for real this time. Harry is wracked with guilt over not being able to protect her from Hobgoblin. Never one to miss a chance to beat himself up, Peter thinks about how he failed to save Gwen, and how he understands what Harry’s going through. Back at school, Ollie bumps into that bully guy, and to try not to get beat up, claims to be friends with Spider-Man. The bully lets him go, laughing, but Jane overhears and breaks up with him. He swears revenge on Ollie, naturally. I’m sure you can see where this is all going, let’s go see people we care about.

And that’s how Spidey winds up right back in the black suit right after getting rid of it. Elsewhere, Ollie has turned a flashlight into… A Spider-Signal. Like Batman’s. Spidey sees it, thinking someone’s read too many comic books, but goes to check it out, all the same.

Spidey’s opening line seems like a quote, but I don’t know it. Hang on, tho, the most insane thing in this issue is on the next page:

I’D RECOGNIZE HIS SHAPE ANYWHERE!?!?!? WHAAAAT? And what kind of doctor talks like that guy down at the bottom??? What is happening in this comic book!? Ugh, man, anyway. Jane catches up to Ollie and wants him to explain his ridiculousness, and then the Skulls catch up to both of them. Ollie picks up Jane and runs for it, not knowing Spider-Man landed behind him and took out this half of the goons. The rest went around to cut off their escape, and are about to start chopping up children, but…

But… how did Spider-Man even know about this? Ollie never told him. Ugh. Whatever. We will see Ollie again, but not for awhile, and when we do… well, we’ll see.