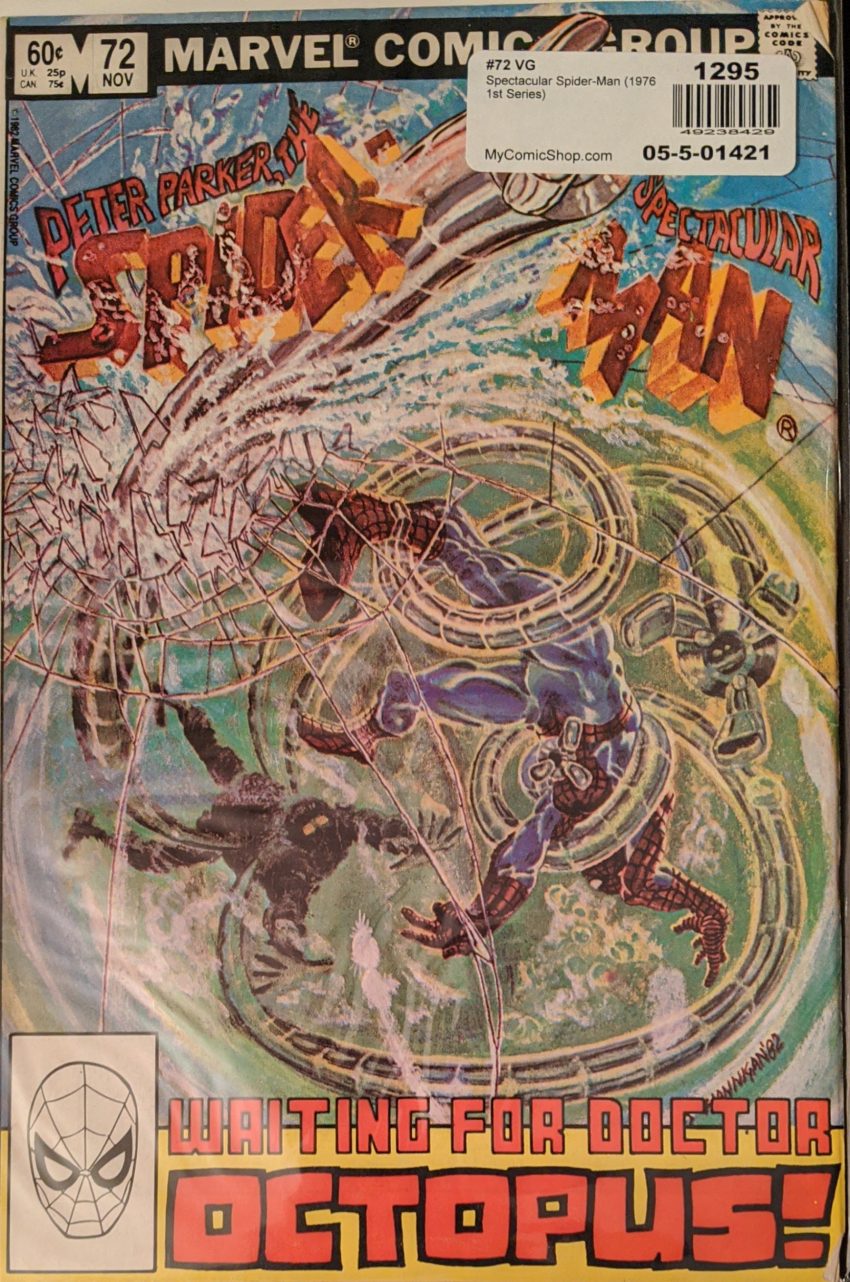 Doesn’t look like we’ll be waiting long. Are they in a fish tank? What am I looking at on this cover? It’s Bill Mantlo, Ed Hannigan and Al Milgrom at the boards for this one. On page one, Doc Ock buys a Daily Bugle from a blind newspaper seller, and the headline is “Doc Ock Escapes!” I guess he already knows that. Then we cut to Spider-Man swinging around the city, complaining about having to look for Ock, worrying about Deb Whitman, and briefly thinking Moon Knight’s passing helicopter might be Doc Ock’s. After that, he decides to call it a night, swinging past a random caricature of Frank Miller drawing on the roof of a building. And in that building, we find The Sinister Six! But not really. It’s a bunch of kids dressed like them, apparently at the behest of their rich friend, Ollie, who arrives with snacks dressed and as talking like Doctor Octopus. Wait, was that him on page one? The premise of their supervillain fanclub is already a bit wacky, but then we learn this child’s octopus arms are fully functional. What???

Seems like a fun bunch. Ollie kicks the other guys out and trashes the place, then starts crying. His parents come home, and the other kids explain what happened, but they find Ollie has gone out the window. He plans to find Doc Ock and team up with him. His parents report him missing, and the cops are worried that, with everyone on high alert looking for Doc Ock, this fake could end up getting…

That is super random. Lucky for Spidey, the robber must’ve just happened, as he finds the thieves fleeing in a nearby alley. He beats them up, but then hears police sirens and decides he better check on them, leaving the goons webbed to his own stuff in the alley. He took his money back before he left, but now finds it’s actually more than he had in the house, so he’s now accidentally got a pocket full of stolen cash as he arrives on the scene of the convenience store robbery the cops were headed to. The perpetrator fits the description of Doc Ock, but all he stole was comic books and candy, ‘cuz it’s Ollie. Spidey doesn’t know that, though, and swings off into the night to find his archfoe. For his part, Ollie is now breaking into a toy store.

Obnoxio the Clown! Obscure reference. Spider-Man is close enough to hear the gunshot, and rushes in. In the dark, he barely avoids some tentacles, but then “Doc Ock” trips and falls on him before trying to flee. Our man is pretty confused by Ock’s behavior.

This must be the toy store that sells all the props from the 60s Batman TV show. Further to that notion, Spidey finds his foe trying to hide in a gigantic fishbowl. Like, big as a house and full of water and fish. What a store this is. Flailing around in the water, Spidey accidentally pulls two of Ock’s arms apart before seeing he’s got a backpack on, and finally begins to realize something is up. He grabs Ollie and drags him to surface.

Poor Deb Whitman. And I guess that was Ock on page one after all. What a goofy issue. This is not the last we’ll see of this kid Ollie, believe it or not. Was it called “Waiting For Doctor Octopus” because it was just filler until the real Doc Ock story started? So weird.