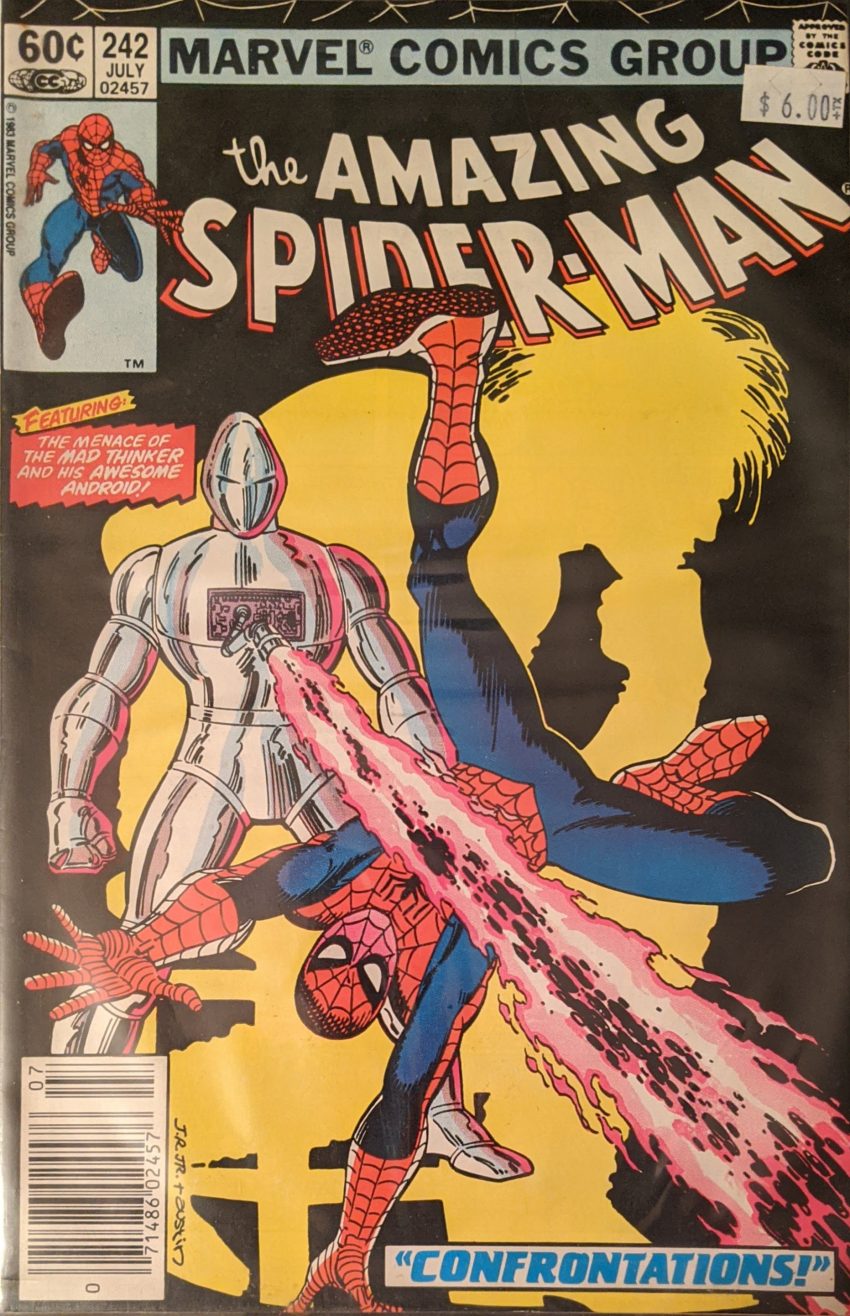 Fun cover idea. He really calls it his Awesome Android. Gnarly, dude. One Kevin Duban finishes this issue, and Bob Sharen is back on colors. I need to pin down when he started on ASM, he must’ve colored hundreds of Spider-Man comics in the 80s and 90s. Anyway, we get rolling with Peter Parker heading in to see if he passed his first year grad school final in spite of the taking the night Black Cat was shot running on no sleep (In TAC 77, which was only a couple months ago, publishing time, but which was covered on the blog a million years ago). But biophysics is the only department that hasn’t posted grades. And as Dr. Sloan walks up to chide Peter as usual, he finds out why.

It just occurred to me to wonder if anyone else is drawing Peter with this bag Romita, Jr. has decided he carries everywhere. I haven’t noticed, I guess, but I sure got familiar with it working on the Try-Out Book. Speaking which, as Lance Bannon pulls up and demands Peter get in the car so they can discuss personal matters, I’m pretty sure he’s wearing the jacket Peter wore in The Try-Out Book. It’s got that weird belt buckle at the throat. Another thing I never woulda noticed if I hadn’t been inking it for weeks. While Lance prepares to yell at Peter for not actually paying attention to his girlfriend, we check in with the villain of the piece. The Mad Thinker is in prison upstate, mad thinking.

Thinky eventually admits all those heroes actually beat him, but then he sees footage from his New Hampshire bade of the fights from MTU 129 & 130. Seeing Spider-Man defeat the robot cobbled together from his parts intrigues The Thinker, and he decides to set his android against Spider-Man for research purposes. He’s heard rumors of Spider-Man’s danger sense, and if it’s true, he wants to try to replicate it. So the Android activates and flies off, and Thinky returns his mind to his real body in his cell. Then we join our photographers again.

I mean, it wouldn’t be your first love triangle, but good for you, anyway, Pete-o. He’s so flustered by the situation that he switches to Spider-Man to swing around and clear his head. But, of course, he’s attacked by The Awesome Android.

I love those kinda Spidey-in-action panels at the bottom there. Spider-Man dives into the android and it smashes to the ground, but when he goes to investigate, it deploys the flamethrowers on the cover. As the battle continues, a mysterious redheaded woman tries to see Peter Parker, but Mrs. Muggins runs her off. GOSH, who could THAT be? Back at the fight, The Thinker is now watching the action via that ridiculous brain transmitter thing he has, and is certainly seeing evidence of Spidey’s danger sense. On top of that, Lance Bannon has shown up and is getting photos of this fight that Peter isn’t, and that just makes him mad.

Spider-Man lures the thing into a trap that involves him doing ludicrous amounts of property damage to this power plant. Then the android explodes and Spider-Man is all-too happy to take off. But The Thinker has seen all he needs, and is now determined to learn how Spidey’s danger sense works.

Well THAT’S awkward! We’ll see how this plays out next post. As for The Thinker’s plan, well, as we know due to jumping around, this plot gets abandoned, only to get picked back up more than 10 years later in the incredibly convoluted Spider-Man Team-Up #2.

This issue features a 2nd letter during the Stern/Romita run from future comics pro Evan Dorkin. The previous one was in ASM 236, and here we have him commenting on that very issue.