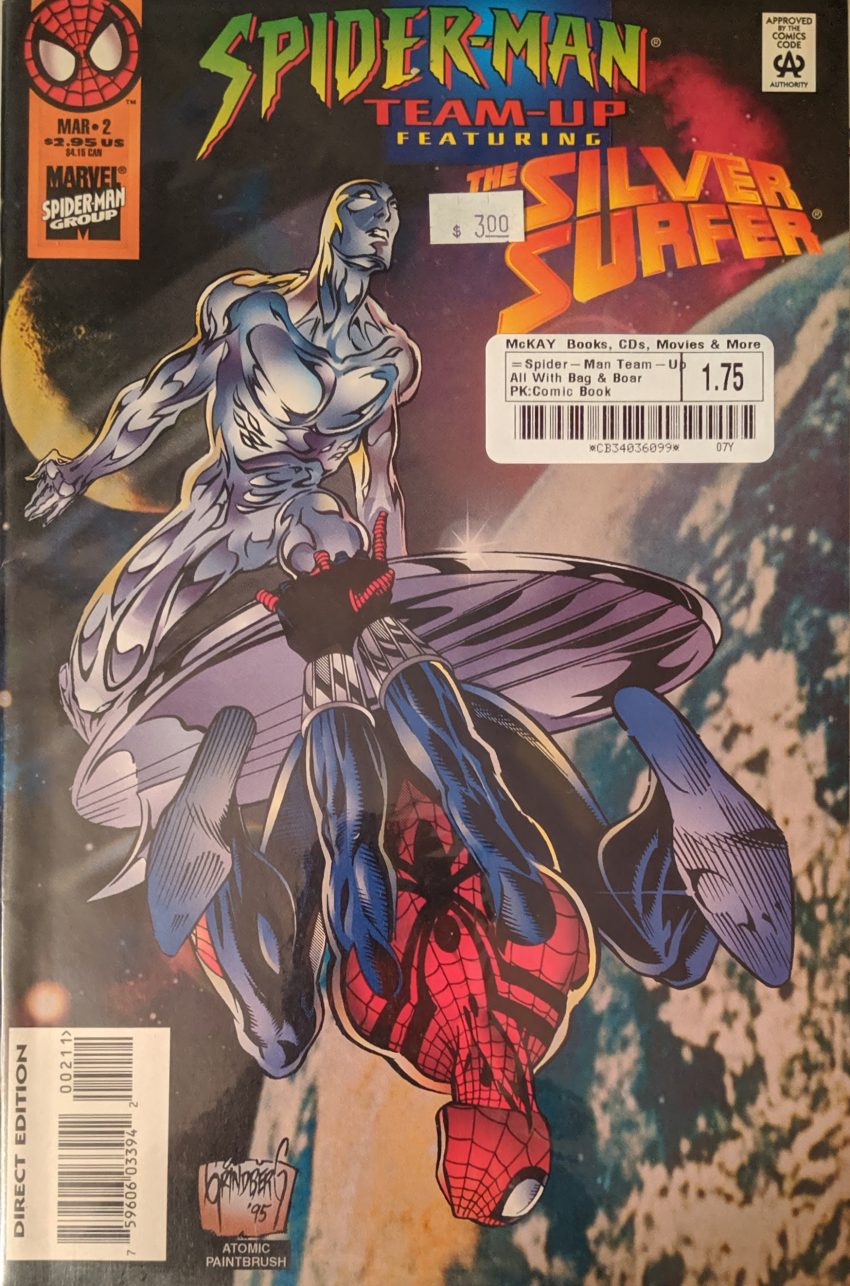 What is this? Well, see, not content with 4 monthly titles and a quarterly, it was decided that Spidey needed to get back into the team-up business, too. This one is also quarterly, and sticks to it, unlike Unlimited, which just kinda came out whenever. In addition to adding 48 more pages every quarter to an already overcrowded Spidey line-up, this thing also launched about as stupidly as possible, with issue 1 featuring Peter in the title role and the rest of them featuring Ben. Why not just wait? 1 came out the month before the initial salvo of Ben Reilly Spider-Man titles, during the 2-month Scarlet Spider stunt, after Peter & Mary Jane had left the book forever to go live in Portland. Why oh why did they complicate things by leading with the wrong Spider-Man? I don’t know. This series only lasted 7 issues. Especially with Spidey pretty routinely teaming up with other heroes already in Unlimited, it just seems like too much. Complicating things even further, this series had no regular creative team. The folks behind the scenes changed almost entirely every issue. Not helping! Crazy credits for this one. Plot by the GOAT, Roger Stern. Script by legendary artist and occasional writer George Perez. Pencils by Tom Grindberg, inks by Bill Anderson, colors by Tom Smith. Perez was writing The Silver Surfer monthly at the time. Anyway! Let’s see Ben Reilly meet The Silver Surfer. The issue opens with The Silver Surfer soaring the spaceways, as usual, when he’s attacked by… a biplane?

Things stay weird as the plane flies into a bay on a big zeppelin, also flying through space. The Surfer dives in after them, and demands to know why he was attacked. As their boss leads him further into the giant casino inside the blimp, talking like a gangster, the Surfer realizes they’re Skrulls. Woof, ok, so back in the late 60s, near the end of his time on the book, Jack Kirby came up with this crazy Fantastic Four plot about a planet where Skrulls are living as 1930s Earth gangsters. Nyah, see, the whole bit. It’s a delightfully silly story. These are those guys. They were scared of The Surfer due to his former association with Galactus, we’re told, but they don’t mean him any harm now. He looks out the window and sees where he is in space and says he has to go. Why was he here in the first place? And then we go see the photocopy of our man on Earth, currently happy he’s being shot at.

The comics industry has just more or less collapsed due to speculators, ya see? People bought up multiple copies of every  new #1 or gimmicky foil chromium glow-in-the-dark cover until they realized they’d never be worth anything and vanished, leaving the companies who’d been all-too happy to capitalize on the trend producing way, way too much product, and boom. This eventually drove Marvel to bankruptcy. Anyway, Spidey finishes up the goons and his old pal Detective Snider shows up. You know, Roger Stern’s cop, not seen since the 80s. Every writer seems to have their own cop to bounce Spidey off of. It’s funny to see him suddenly reappear. And, of course, he is Spider-Man’s old pal, but not THIS Spider-Man, so Ben has no idea who he is, and has to make a lame excuse as he rushes away, furiously recapping his backstory. He’s wrapping up here.

The Thinker! AKA The Mad Thinker! One of The FF’s earliest enemies. And a mysterious somebody manipulating The Thinker! It’s The Silver Surfer coming through the wormhole, of course, furiously recapping recent events in his own series as he sails toward Earth. Turns out the mystery narrator has beef with The Surfer, too. Who could it be? Back on Earth, Spider-Man has a hit on his Spider Sense, but it’s so powerful it’s a searing pain in his head, causing him to lose his grip on his web and fall. But then it suddenly stops, and he manages to save himself. He has no idea what could’ve caused this, since the only thing around him were some pigeons, and then those same pigeons swoop back at him.

Spidey tries to defeat the pigeons, but the distraction lets him get caught by The Thinker’s Awesome Android (That’s what he calls it!) who grabs him up and then…

This is really… something. Soon, in Yosemite Valley, CA, The Surfer is on his way to San Francisco for some reason when he’s attacked by a visibly and audibly messed up Spider-Man. The element of surprise lets him web The Surfer’s eyes so he’ll fly into a tree, fall to the ground, and then get pinned under said tree as it falls, but that only holds him a moment. The Surfer demanda an explanation. Spidey tries to explain he’s in excruciating pain and this is an ambush, but then some of The Thinker’s androids are on them. The Surfer destroys them in a huge flash of energy, but this seems to drain him, and he falls out of the sky to the ground, right through a net Spidey tried to make to catch him.

So a long-forgotten creation of a minor FF villain has somehow gained control of Thanos’ old spaceship for revenge and fun and boy snatching, we all caught up? Sheesh. Quasimodo is STILL expositing as Spider-Man is flung out of the room, telling the helpless Surfer he found files on him in the ship that helped him program the androids to defeat him, but then Spidey smashes back into the room through an air vent and frees The Surfer.

They hop around smashing all the TV screens so Quasimodo won’t be able to track them, but on his final screen, the big weirdo says he won’t be defeated so easily. The heroes note he seems to be shrinking, though.

Well, ok. Thanos’ creator Jim Starlin wrote Thanos out of the books way back in the 70s (Wouldja believe we’ll see it on the blog one day? Surfer wasn’t kidding about Spidey’s many battles with Thanos), only to bring him back in the pages of Silver Surfer in 1990, making them antagonists, which would lead to The Infinity Gauntlet event, which would lead indirectly to Marvel Studios being the most successful film studio of all time. This is a weird footnote in all that. The heroes are deposited back on Earth in a cemetery, which is where The Surfer was headed before all this (Why’d he suddenly decide to zip here from the Skrull ship?). Spidey asks who he came to see, so it’s time for STILL MORE EXPOSITION.

Okay! Wow, geez, what an info dump of an issue! I realized too late that I’ve read about this one in the past. This is a quasi-sequel to ASM 242, not yet covered on the blog, but also featuring The Thinker, and also written by Roger Stern. In that one, The Thinker analyzed Spider-Man’s danger sense to see if he could exploit it, but he never got around to it. Maybe a plot Stern would’ve picked up if he hadn’t abruptly left the book less than a year later. But here, some 13 years later, he finally tied it up. How weird! Not the weirdest thing to happen in this title, though. That’s coming up later.