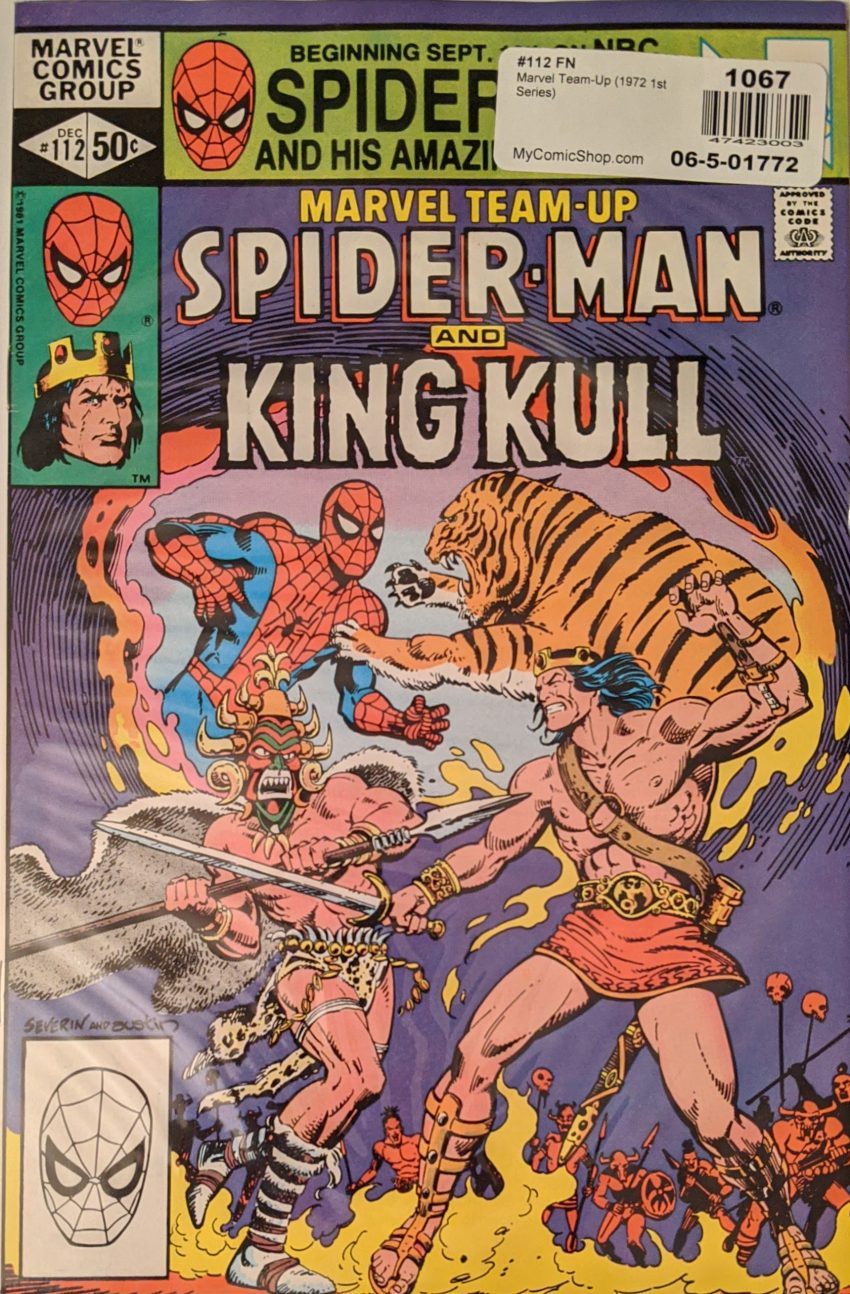 King Kull! A lesser known character from Conan creator Robert E. Howard, and licensed alongside Conan to Marvel at this time. Gonna be hard to get him and Spider-Man together, but let’s see how they do it. Same staff as last issue as Spider-Man appears to be floating in space. He flashes back to the events of last issue and then wakes up.

Really leaning into this idea that Spider-Man is a literal spider-person. Silly if you asked me, but probably not if you asked J. Michael Straczynski (If I ever make it to the volume 2 era, that will make sense!). Strange says the only place they could find a cure is… the ancient past! Specifically, in Atlantis, before it sunk, when it was ruled by, you guessed it, King Kull, who drove back the forces of the snake men in his time and had his scholars develop cures for their venom. So Strange does what you do in situations like this and separates Spidey’s astral form from his body, casts a “spell of acceptance” on him to make him stop freaking out, and sends him back in time to possess someone and get the antidote. Complicated! Spidey’s spirit goes flying past various moments in history (Real missed opportunity for him to see himself at the Salem Witch Trials) before finally making it to Kull’s time.

Doc Strange absolutely did not tell him he could use his powers when he possessed people. Anyway, he goes to Kull’s throne room and possesses his main man Brule to reveal himself as a friendly spirit seeking the antidote (Thanks to a translation spell Strange absolutely did not cast, this is all quite lazy). Kull’s seen enough weird crap to believe him, but he has no antidote. Strange apparently sent Spidey a little too far back. But once un-possessed, Brule says he knows about an evil shaman named Ju-lak who probably has the antidote. He’s supposed to be super tough and scary, but Kull feels he owes the spirit a debt, so he and his boys set out on a quest to get the stuff, Spidey’s ghost flying above them. Then they all get attacked by some kinda monster men and Spidey possesses a guy to help save them.

Ju-lak is watching all this with a spell and decides this spirit working for Kull needs to be working for him, so he casts some kinda spell that knocks everyone out, and they wake up in his clutches. Spider-Man is trapped in a thingie, and Ju-lak has even magically made him visible. Ju-lak says Kull can go free and whatnot if he beats Ju-lak in combat, and also, Ju-lak is going to use Spider-Man’s powers against his will. Sure enough, he absorbs Spidey into himself. But Kull apparently has some kinda spirit link with “the tigers of Atlantis,” so he’s not worried as they get to it.

2nd time in 2 issues DeMatteis has used the phrase “living spider” as if all spiders aren’t alive. They keep it up until Kull is distracted by the bad guys beating up Brule, and Ju-lak gets the better of him. He’s about to stab a spear through Kull, but you know…