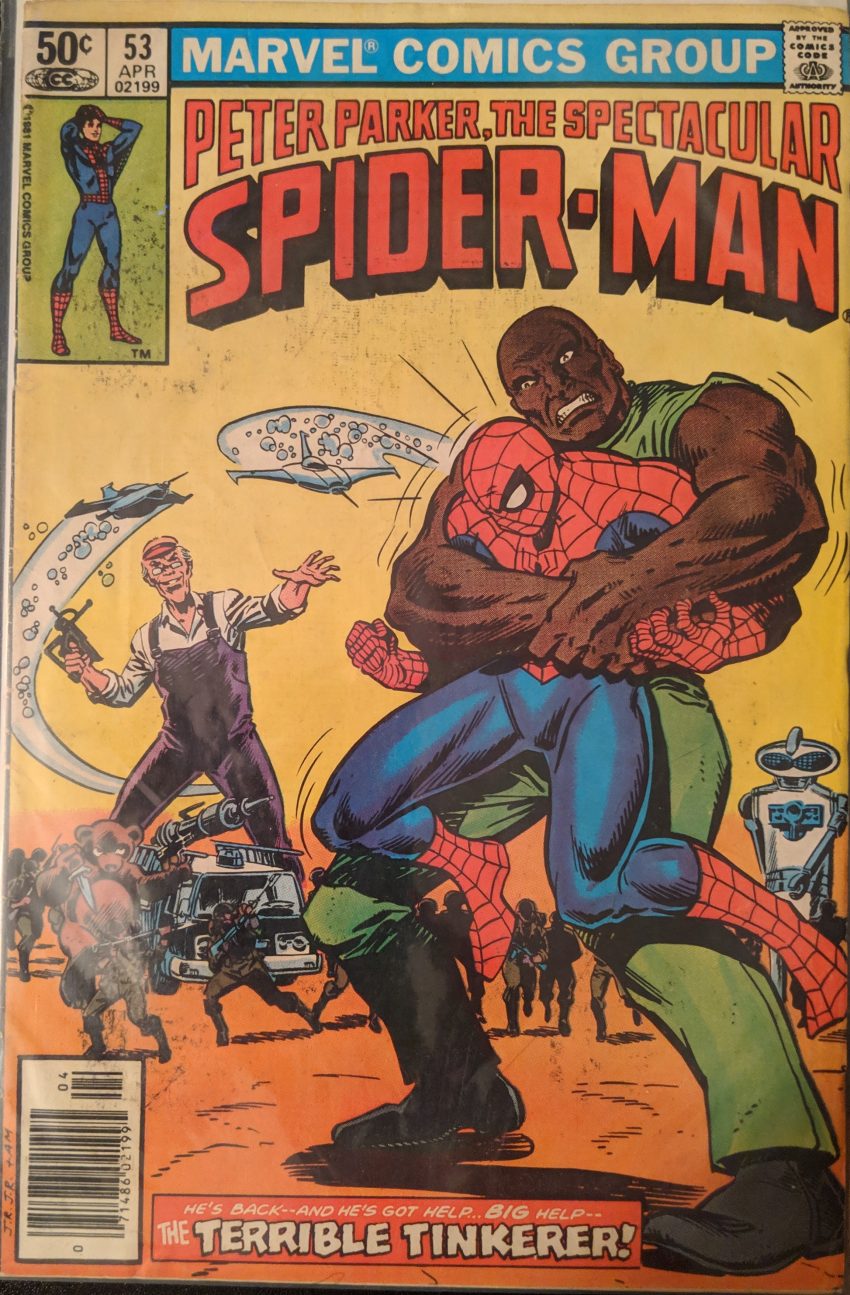 It’s a fill-in by Bill Mantlo, Jim Mooney & Frank Springer this month, and that cover is not promising. Thanks to the magic of the internet, when I got Roger Stern’s Spectacular run years ago, I skipped fill-ins, but I got ‘em now, so here we go. Peter Parker’s walking home after a whopping 6 photo sessions for the Bugle when a woman appears out the window of a nearby building, raving about “the toys” and ready to jump. With no time to become Spider-Man, Peter ducks into a phone booth just long enough to make a web mask for himself and take off his shoes. As he does, he brushes past a shadowed figure who, given the cover, is prrrrrrobably The Tinkerer. Then he leaps into action as The Amazing Peter Parker. A cop is trying to talk the woman down, but all she sees is some kind of evil nutcracker coming at her. Then she slips off the ledge, and the cop grabs her, but he goes over, too, and the pair plummet past our hero. He webs them, but loses his own grip on the building, and now they’re all falling. He grabs their hands, hooks his legs on a flagpole to slow them all down, and then drops them again to web a net under them at street level.

It’s a pretty wild sequence. Spider-Pete rushes off to get a look at the place she came from, as The Tinkerer walks off into the crowd, thinking he’ll soon kill Spider-Man. Probably not! Pete climbs up to the window and finds himself looking into an office that’s been tossed, with the safe ripped open, and his Spider Sense going off. A toy zeppelin suddenly appears and blinds him with a flash, as The Tinkerer’s wildly uncomfortable android named “Toy” we saw was back in ASM 182 attacks him.

Peter doesn’t seem to know he’s a robot. He’s holding his own until a jack-in-the-box sprays gas in his face.

With Pete down, toy seems to think he’s done, picks up two big bags of something, and walks out the window. The box on his back turns out to have an adorable little propeller in it, and he flies away. This seems corny even for 1981. Pete tosses a spider tracer, but instead of the backpack, he hits Toy right in the head, and he doesn’t react. This seems odd to him, but there’s no time to consider it, as the cops burst in and Spider-Pete has to escape. He swings off psychoanalysing himself….

That doesn’t sound fun. When he can, he rips the web off his face, gets in his Spidey suit, and follows his tracer to a repair shop. A trip through the air ducts brings him to a room full of toys. Spidey takes a look around, but then his tracer starts coming closer, so he dives back into the ducts.

Spidey knocks Toy across the room, and Tinkerer remarks that he’s still full of surprises after all their encounters. Spidey says they only met twice, and that gives Tink a chance to let him know he was behind a few past adventures, including the Rocket Racer in ASM 184 and Big Wheel in 185. Now we’re all caught up, turns out he was stalling so he could hit a button on his control console, and then Spidey is attacked by an actual army of toy soldiers.

They herd him into a giant grabber claw machine. Yes, really. This is turning into an episode of the 60s Batman show. As Spidey easily escapes it, Tink mentions he made it for the X-Men villain Arcade, but he didn’t pay for it. Spidey goes down a ramp, is attacked by some dolls, it’s getting rather tedious, and then he gets grabbed by Toy. Who he figures out is a robot because he’s impervious to pain and didn’t seem to have a power pack for that helicopter (I mean, explain Iron Man then, but ok). He throws Toy at Tinkerer right as he’s firing some kinda ray gun.

Well, that’s weird. And we’re out. In the letter column Roger Stern himself is answering mail, which is unusual in this era, and one letter is of interest to me…

Glad I’m not the only one who thinks the Deb Whitman stuff is… awkward. But if you think there’s any kinda resolution that coming anytime soon, well… yer wrong.