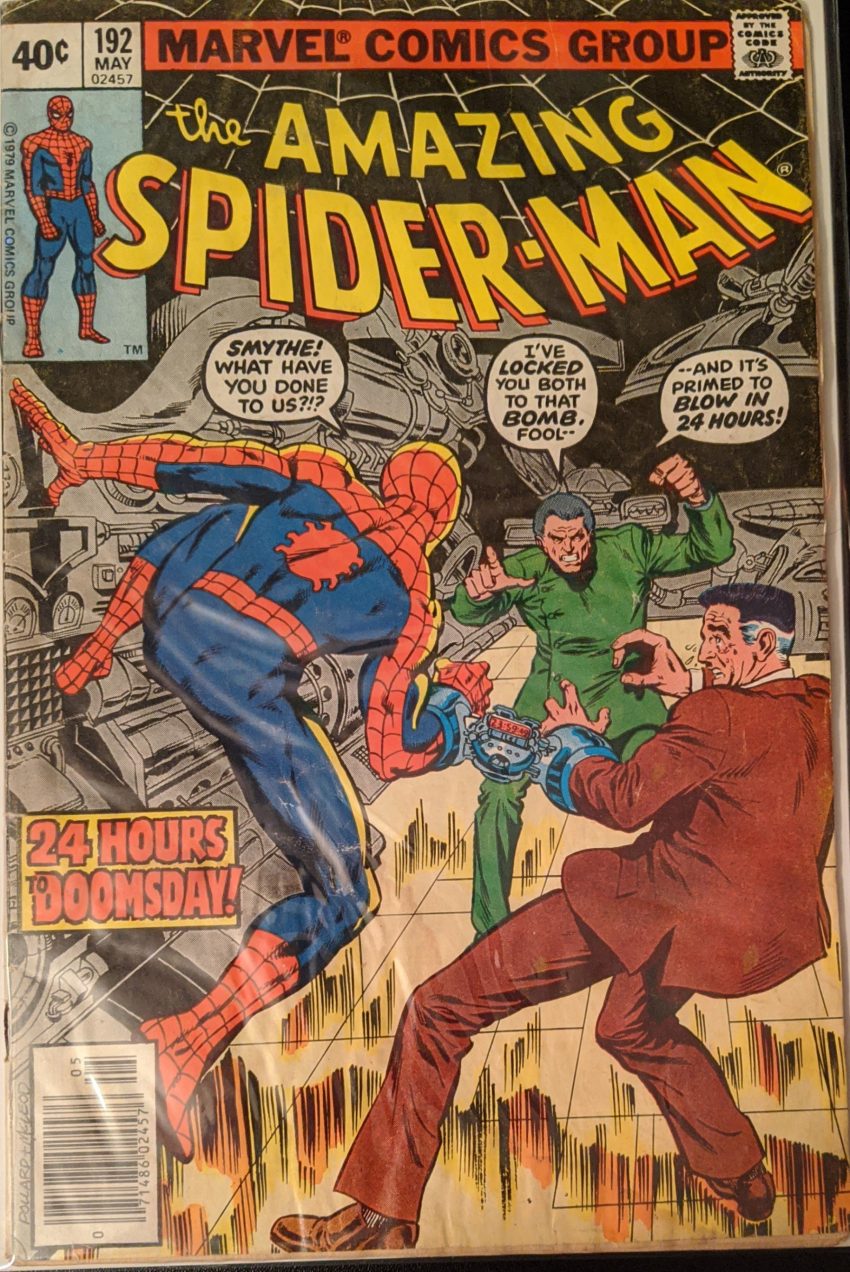 My copy of this book is pretty bad! Warped and weird, with a rip in the back cover. But, hey, at least it also smells terrible. Whew. Can’t win ’em all. Jim Mooney’s in on inks to pick up the story from last issue, and Spidey and JJJ are still strapped to a bomb. Everybody works together to recap how we got here as Spidey quickly learns he can’t reason with or intimidate Smythe into freeing them. The bomb will explode in 24 hours, and he’ll have his revenge. Spider-Man drags them out of Smythe’s lair for lack of anything better to do.

JJJ going for the mask is a nice touch. Spidey hits JJJ with his favorite insult of the period (You know it’s “Pork face!”), then drags him to Curt Connors, who can’t get the bomb off. Then the cops bust in, having gotten a tip that Spider-Man dragged a guy in there. We briefly cut away to The Human Fly stealing an invitation to the Egyptian exhibit, then back to Connors’ lab, where the police bomb squad is having no luck getting JJJ and Spider-Man free. The bomb squad can’t help either, so Spidey once again drags JJJ out a window. Poor JJJ is really having a bad time here. Then we cut to Betty trying to get the gang together to surprise Peter when he goes to pick up his diploma. I’m sure that’ll work out! She even invites Mary Jane, who thinks to herself that she’s scared to date Peter again, worried he’ll propose again. As she gets ready for their doomed date tonight, her internal monologue gives her first-ever inclination that her folks split up when she was young. Meanwhile, Spidey is dragging JJJ around town when this idiot shows up.

We haven’t gotten to that annual yet, but yeah, The Fly is yet another horrible villain JJJ is responsible for. He should be in jail for life. In the ensuing battle, Spider-Man really can’t fight The Fly with a raving old man stuck to his arm, and the villain eventually knocks them down into an alley and just… assumes they died. Doesn’t check or anything. Which is dumb. JJJ wakes up first.

The final end of Peter & Mary Jane’s relationship! THE END! And what a lame end that would’ve been. First the botched proposal and then this? Ugh. Anyway, with just over an hour to live now, Spidey decides to drag JJJ back to Smythe’s place, but when they get there, he’s dead. He didn’t live to see his vengeance completed.

Spider-Man realizes there must be a battery in the shackle and goes looking for a power supply… in the lab? Like it’s beaming power to the shackle wirelessly? It doesn’t really add up. But they find the controls and use the liquid oxygen from John Jameson’s cryo tube to freeze the machine, allowing Spider-Man to throw it in the air to explode harmlessly. They’re finally free. In the process of all this, JJJ has admitted to Spider-Man that his hatred is jealousy, but now that they’re not gonna die…

AND he didn’t get the pictures of the Egypt exhibit. Yeesh. Tough day for our man. Rehashing JJJ’s admission that he’s just a jealous jerk at the end there seems unnecessary. It’s been done, and better. But I guess we still have The Fly to deal with next time. Maybe JJJ can get even more humiliated there.