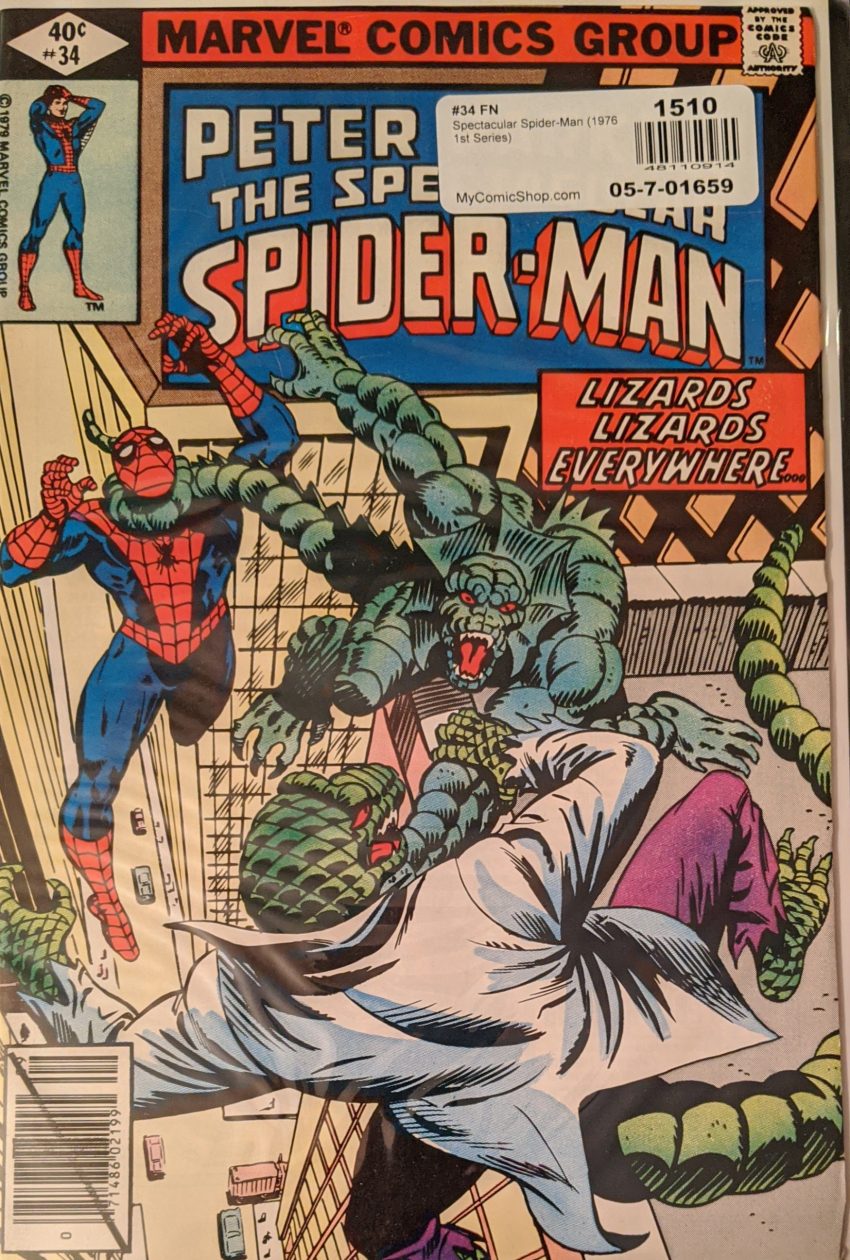 Whoever inked this cover really did the bare minimum on The Lizard’s scales. The cover sums up the action on the opening splash, which itself sums up what’s gotten us to this fight. Then The Lizard goes for The Iguana, saying if he’s harmed the Connors family, he will die, and The Iguana drops Spidey. Then this happens:

Spidey being bad for property values is pretty funny, and also pretty realistic. Spidey swings back up into the fight, trying to figure out what to do and recapping more of the last 2 issues. The battle rages right outside The Connors’ smashed window, and when Martha cries out, worried for her husband, The Lizard seems to care about her. But this also drops his guard so The Iguana can really get at him. Then Spider-Man kicks them both off the roof. Whoops. He doesn’t plan to kill them, of course…

Spidey hops back up out of the ground and goes to tell The Connors what he knows about the situation. As he’s describing how Curt’s Enervator fed some of his power into The Iguana, he hits on an idea to save the day, and books it over to ESU, where he switched to regular clothes.

Reading these things out of order a lot of the time means I know what Sloan is up to with that skeleton, and let me tell you, it’s stupid with a capital S. Anyway, Peter manages to convert Doc Connors’ Enervator into a portal backpack unit, hoping he can use it on the two reptile men. But as he’s finishing up, Marcy Kane shows up to give him grief about not taking science seriously, which is basically her role in this comic. Dr. Sloane pops in to say Peter came in early and is working hard and it’s all good, thinking to himself that he really wants to get Peter out of there in case he saw that skeleton. So Pete is free to switch to Spider-Man and go find his playmates. Later, we’re told, after looking at the water department’s records (Huh?), he’s determined that the 2 lizards would’ve been swept into The East River Water Purification Plant, and hands down there. Soon enough, he finds The Iguana, and the fighting starts back up. It quickly becomes apparent the 2 reptile men are now working together against their common foe, but Spidey needed them together, anyway, so that’s fine, as it turns out.

Oh, sure. Never gonna be The Lizard again, no sir. This was a weird storyline. You’d think maybe someone thought to replace Connors as the villain, like Lee & Romita’s short-lived attempt to make someone else The Vulture in the 60s, but just like in that case, the fans wouldn’t go for that, and neither would future creators. The fact that they more or less repeated this in the 90s is even weirder.

This issue features a letter from future comics great (And Untold Tales of Spider-Man writer) Kurt Busiek, praising recent issues, and also saying this new kid Frank Miller isn’t as good as Keith Pollard. I wonder if he still feels that way.