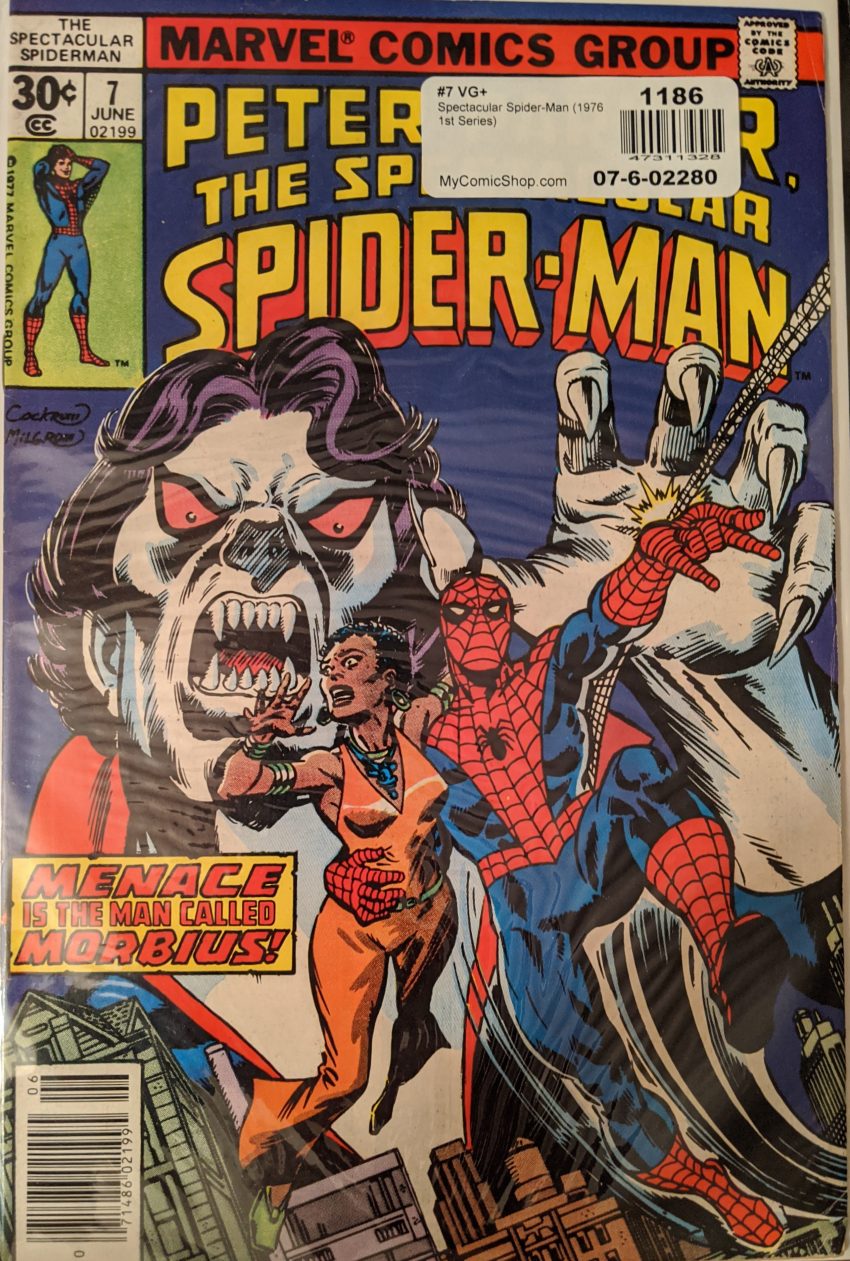 The 70s are a pretty dark period for Marvel Comics, all told. There’s certainly bright spots, but a lot of the books were not too great, and there were other problems. Chief among them: chronic lateness. Marvel instituted a policy letting their star writers be their own editors, aka their own boss, and suddenly, books got late. It was throwing the company’s finances into chaos, and it was forcing regular series to run reprints to catch up. That is the situation we’re walking into here. Spectacular Spider-Man #6 was, but for the opening and closing page or two, a reprint of Marvel Team-Up #3, Spider-Man and The Human Torch’s battle with Morbius. The legendary Archie Goodwin’s brief tenure as the writer on this title was going to include this Morbius story, but when the schedule slipped, #6 just became a reprint of a previous adventure with the villain to get people in the right frame of mind. So, now, joined by the ubiquitous Sal Buscema & Jim Mooney, Archie can get to his Morbius story. And it begins with Spider-Man rampaging through a bar, terrorizing the enforcers of perennial Marvel low level mob boss Boss Morgan. He’s fought Captain America and The Falcon, and will later be a problem for Luke Cage, but today, Spider-Man’s on his case.

Spidey slings Morgan into his goons like a bowling ball and takes off, pleased with his handiwork. He retrieves his street clothes from a vent he hid them in, but soon finds that vent was on the side of a deli, and he reeks of deli meat now. Whoops! We do a real brief drive by an on-going Flash Thomspon subplot from issues we’ve not actually seen yet, and then it’s time to check in with Morbius.

That is a significantly more gruesome Morbius than I was expecting from this art team. Pretty cool! The mysterious voice guiding Morbius tells him to go feed on someone, but after feeling his strong reactions to a picture of Spider-Man on a Daily Bugle van, it orders a change in plans.

Oh… kay. How does sharing groceries save money? Maybe that’s not important right now. Glory’s in trouble! Peter arrives at The Bugle just in time to see Glory flown out the window by The Living Vampire. Morbius, once a respected man of science, is apparently now so dumb that he believes that, since he saw Glory holding a photo of Spider-Man, she must know how to contact him. But before she can disappoint him, Spidey has arrived, kicking Morbius off the roof he’s perched on and into the next building over. Thus, it is fightin’ time.

In the midst of the battle, Spider-Man gets down to street level, and so focused on Morbius that he almost gets killed by a truck. Instead, it clips him, leaving him a little dazed and lying in a pile of trash as Morbius swoops in for the kill. But then we cut away to…

I guess this wacky Grey Panther stuff is better than Aunt May always on the verge of death, but it’s pretty bizarre. Back at the fight, there isn’t one. Instead of killing the dizzy Spider-Man, Morbius is commanded back in the direction of Glory by the voice in his head. Spidey then realizes his truck accident somehow wrecked both his webshooters (Without breaking his wrists?), so he’s in a rougher spot than he thought. Up on the roof, Glory is trying to find a way down, and Morbius wants to drink her blood, while the voice in his head tells him not to, and then Spidey’s on the scene. He scoops up Glory and tries to run her out of there, but…

Only one shall survive out of who? “The Empathoid” and Morbius? Both of them and Spidey? Is Glory included? I suspect we’ll never know what was meant, but come back next time to see what’s goin’ on here.