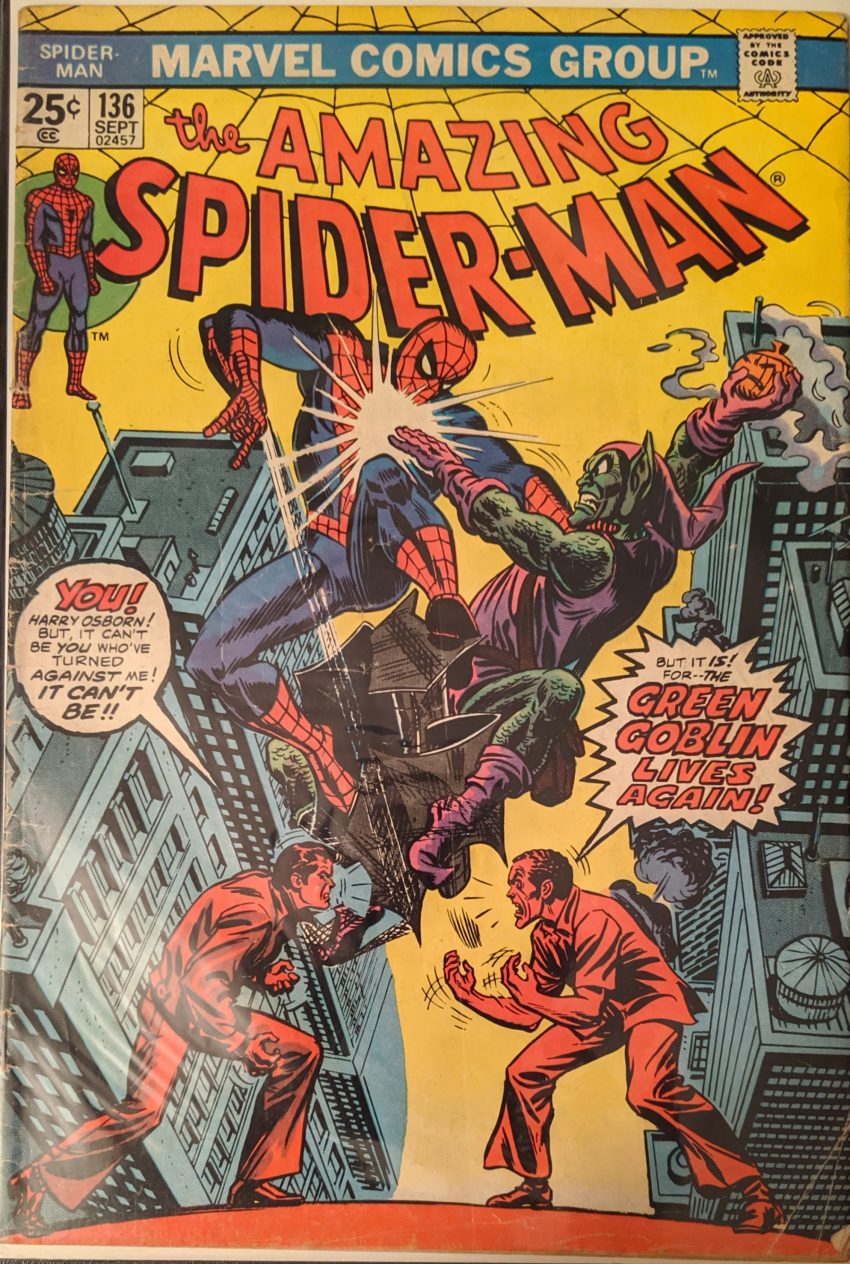 This is gonna be crazy one. Dave Hunt rejoins the otherwise unchanged creative team. Things start out pretty sweet, as Peter & MJ return to his apartment after a Sunday afternoon out doing all kinds of activities. They seem to be dating now. Last we saw, Pete just wasn’t over Gwen, but they’re openly talking about it. MJ even asks if Harry will be ok with it since she went out with him, but Peter says they don’t see each other much anymore.

Holy crap! MJ is out cold, but seems ok. Peter thinks he might have a concussion. He goes into the apartment to find it trashed. He hears sirens, and realizes the cops can’t find his Spidey stuff. He jams his spare webshooters in his pockets and tosses his spare costume onto the roof of the next building in a web sack, then runs back to MJ, still unconscious. Later, at the hospital, a doctor tells Pete MJ will be fine after some rest, and lets him in to see her. Things get weird.

I mean, it’s only been 14 issues. A bit over a year. “Long past?” Pete relives the deaths of Gwen Stacy & Norman Osborn to catch us up on that, and then begins to worry the Green Goblin is somehow still alive. Switching clothes, he heads out to Osborn’s warehouse headquarters to see if anyone’s there. It seems like it’s been untouched for months, but…

That concussion must be serious, it’s got Pete out here licking floors. Why… would someone do this? Take the time to sprinkle fake dust everywhere? He decides to wait for whoever’s been using the place to come back, and hours later, someone does:

Well, that can’t be good. Spidey calls the Goblin “Harry,” but that doesn’t register, and his foe keeps talking as if he’s the same Goblin who died in ASM 122. Harry is totally nuts.

They fight throughout the warehouse for awhile, Harry raving and Spider-Man trying to reason with him, but then Spidey gets knocked out, realizing the exhaust from the Goblin’s glider was drugged. Harry talks about how he figured out Peter was Spider-Man, and thus, Peter had to die.

Uh-oh! There’s a random twist that was harder to see coming. His girlfriend in the hospital, his roommate out to kill him, and now he’s quit his job. What could possibly happen to our hero next? Harry being so formidable against Spidey feels hard to swallow. Norman had legit super strength and lots of practice with his gear. Harry’s just a guy having an episode. Ah, well. The drama of it is still pretty good.

My copy of this issue has several almost invisible holes punched all the way through it. Like someone stapled it a few times. What could that be about? This is another one that’s usually very pricey, that I landed a remarkably good deal on. I don’t think they said anything about the holes. However: Marvel Value Stamp safe & sound!