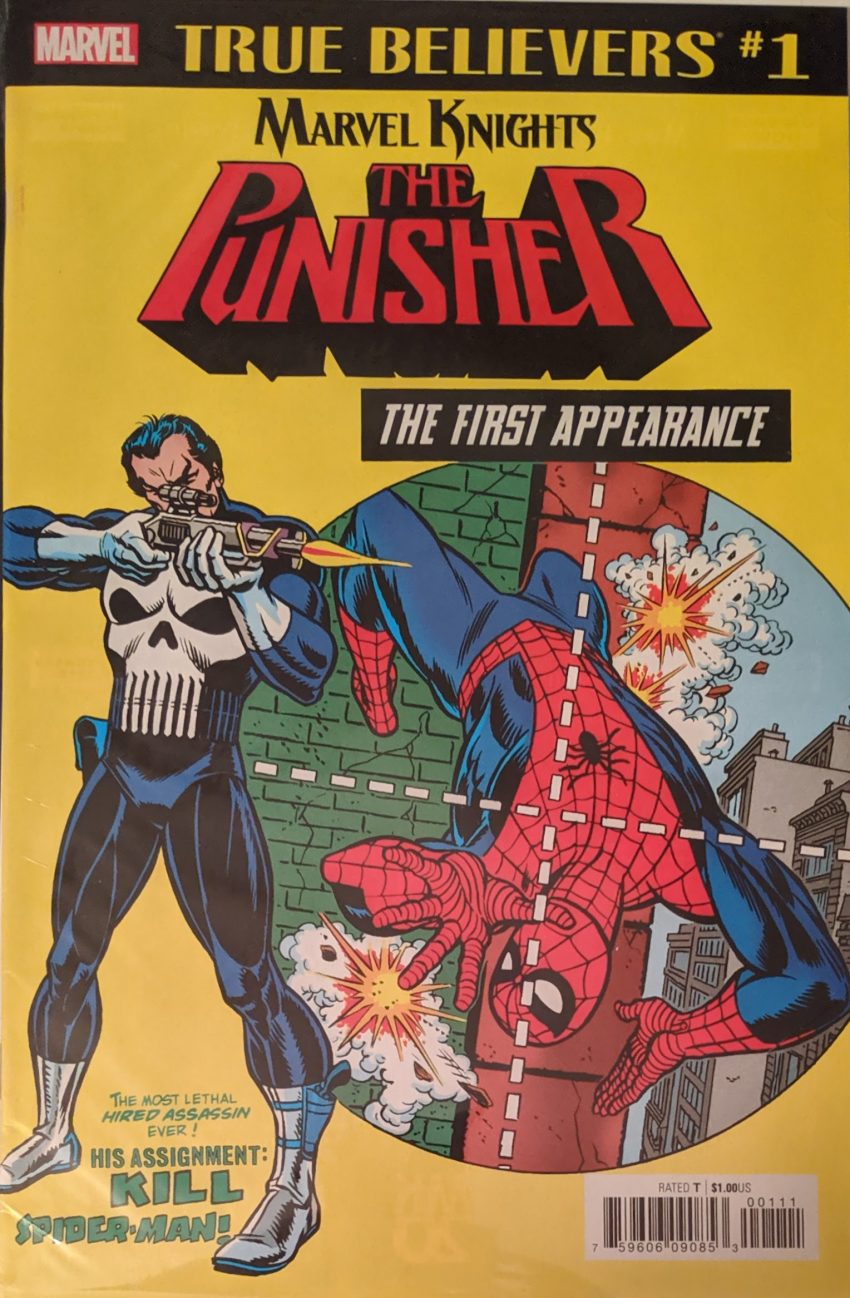 Yay, a reprint! If anyone wants to send me thousands of dollars to get an original, I’ll be happy to change the picture out. Luckily, this $1 reprint of Amazing Spider-Man #129 was released right as my crazy eBay binge was coming to a close, so it fit right in. Welcome back to 1973, and to the beginning of a long storyline that’s pretty important to me, personally,  as it will eventually include one of the two comics my Mom got from a garage sale when I was a tiny child, the comics that kickstarted this crazy habit for me. This story’s so long that that comic is not even in this block, but it’s coming. In the meantime, this will be a stretch of ASM I’ve never read before, and I’m pretty excited.

We’re back to the Gerry Conway/Ross Andru era. As you’ll recall, Ross Andru is only the 4th person to draw ASM monthly. Gerry Conway was only the 3rd person to write ASM, and infamously killed Gwen Stacy just 8 issues prior to this, less than a year after getting the book. But he’s still pluggin’ along, and he & Andru are about to drop 2 gigantic bombs in this issue in the form of Punisher and The Jackal. The Jackal will go on to menace Spider-Man for some time after this, and then be instrumental in two of the worst stories in the history of Spider-Man in the 1990s and 2010s, so… kinda more infamous that famous. And The Punisher is The Punisher. I don’t have to tell you who he is. Let’s get to it.

Behold those glossy reprint pages. I’m not sure shooting a statue is any kind of real test for executing a superhero, but hey, everyone has to start somewhere.

Things don’t sound too good for our hero, who is at that moment, swinging around town complaining about the air quality, and happening upon a robbery. The goons are from Detroit, and only know what the media says about Spider-Man, so they assume he’s just looking for a cut of the take. He is not. Instead, he flips around subduing and webbing the guys up while describing his powers for them. He even tells them his webshooters are mechanical.

He leaves the webbed up goons for the cops and swings off, thinking about how everyone thinks he killed Norman Osborn. No one knows Osborn was the Green Goblin, or that he killed Gwen Stacy, or that he then accidentally killed himself in a battle with Spider-Man in ASM 122. Between being blamed for the death of a famous businessman and the death of police captain George Stacy (In ASM 90), everyone thinks Spider-Man is a bad guy. He’s tormenting himself with these thoughts as he swings over to The Daily Bugle, where he… tries to put on a happy face… in the creepiest panel ever…

Woof, that face! Peter’s come to drop off photos of Spidey stopping the robbery a second ago, but all JJJ wants is pictures of this mysterious new guy, “The Punisher,” who’s gone to war against the mob. Peter says he’s heard of him. An exasperated JJJ runs him out of the office demanding he find and photograph The Punisher immediately. Pete leaves the office and changes to Spider-Man, wondering how he’ll ever find The Punisher. But The Punisher has found him.

Punisher tells Spider-Man he doesn’t like going around killing dudes, but he has no choice. Someone has to clean up the crime, and it’s the job he’s chosen to do. While he’s monologing, Spider-Man breaks free of his ropes and whacks the Punisher pretty good. As it turns out, rather hilariously, the Jackal was hiding in that chimney Punisher pulled the gun out of a minute ago. Now he’s worried Punisher will go down and reveal his existence to the police or Spider-Man, so he waits ‘til Spidey’s back is turned and…

He manages not to fall to his doom, but when he swings back up to the roof, his foes are gone. Luckily, the Punisher left one of his guns behind, and the company that made it put their name on the handle, so he’s got something to work with. Then he swings home, thinking about how Johnny Storm should have the SPIDER-MOBILE ready soon. He’s decided to repair his costume while he talks to himself about it…

As MJ walks away, she thinks she’s not sure she wants to see Peter. She worries he’s no fun and too dark after his GIRLFRIEND was MURDERED. You really got to wonder why a guy would take that so hard! Anyway, then we check back in with Punisher & The Jackal. Their relationship seems to be going sour already, as Punisher slaps The Jackal across the room bellowing “I told you I didn’t want to DO it that way!” Which sounds really petulant, but whatever.

Yeah, those dumbies think Spidey fell to his death earlier. They’re both clearly new to this whole super-business. Also, you gotta wonder how The Punisher got mixed up with a guy in a cartoonishly evil Halloween costume and didn’t question his motives. Punisher storms out to go get a replacement for the gun he lost, arriving at the shop right as Spider-Man does to investigate. Spidey heads inside and finds the owner’s body all cut up (Like maybe by The Jackal’s claws, eh?) and then The Punisher bursts in.

There’s a pretty brief fight. Spider-Man, to his credit, really tries to reason with Punny, but it won’t work, so he kicks that crap out of him and webs him up (Punisher says he did 3 years in the Marines. This origin is going to go through a lot of changes).

And just like that, Spidey’s got two new mystery men in his life. We’ll see where that goes in the coming issues.