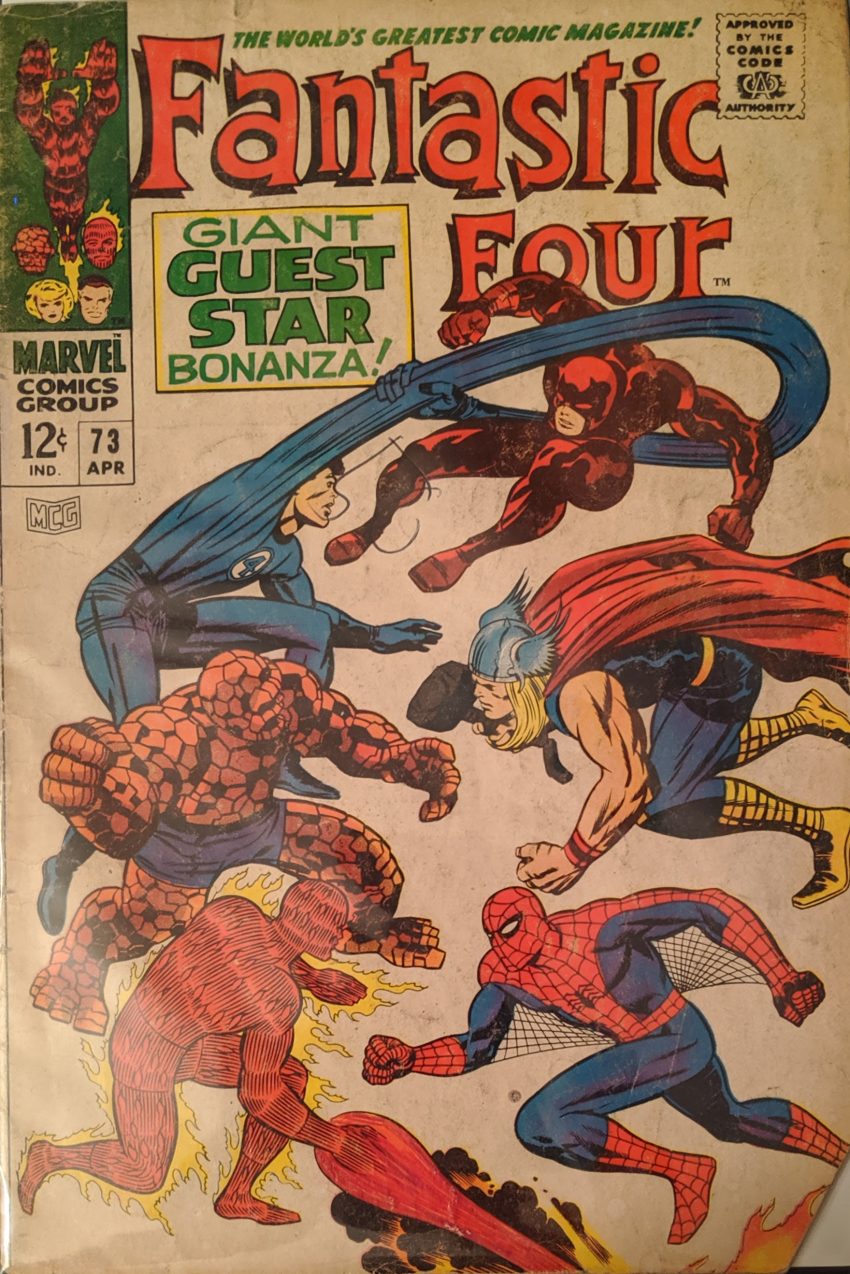 Fantastic Four! And look at all those guest stars! This is going to be a ride. You’ll note the bottom right corner has been clipped off for some reason. Kinda lame, but it allowed me to get this one for dirt cheap, so I’m for it. One of my fascinations in comics is that Jack Kirby, architect of the Marvel Universe, the greatest comic book artist of all time, one of the great creative minds of the 20th century, just never figured out how to draw Spider-Man. You see his drawings of Spidey and they look weird. He doesn’t get the red panel down the arms, he doesn’t get the web pattern, he routinely forgets the spider icon on his chest or back. It seems like Ditko’s character design style is just so far outside Jack’s comfort zone that he couldn’t get it. And I’m not the only one who noticed, as almost every time Jack drew Spider-Man, Stan Lee had the artist of Spider-Man ink him, fixing him as they went. First Ditko, then Romita. And I’d bet you $4 Romita inked or maybe just drew the Spider-Man on this cover. But anyway,  it’s a rare joy to get The King on this blog, let’s get into it!

So, for this one, you should’ve read Daredevil 38 first. I didn’t! In that comic, DD was apparently captured by Dr. Doom, who was impersonating him or something, and now that he’s free, Doom has convinced the FF that the real DD is still him, and they are on high alert!

Sue, I think, is pregnant with Franklin Richards, and off-duty in this period. DD tricks Johnny into flying into a water tower, extinguishing his flame and knocking him out, but not before Johnny can call him “Doom,” so Daredevil has a clue what’s going on. But as he’s dragging Johnny out of the water tower…

I love it. New York is so full of superheroes Spidey could just swing past Thor on his way to running into Daredevil and The Human Torch.

Again, if Romita’s not inking these Spideys, I would be stunned. Look at the eyes. They look more like Romita’s here than they do in ASM with Heck currently penciling. Reed reels DD in, but he and The Thing fight about what to do with him, allowing DD to slip free and keep them running around for awhile until he accidentally runs Ben into the big laser Reed set up on the roof (“The Demolo-Gun!”), which starts blasting the roof. Reed and Ben try to stop it as DD gets loose once more.

Someone drew all over Spidey’s web with an ink pen down there. As Spidey and Thor approach The Baxter Building in this goofy fashion, The Torch wakes up, and swoops in, assuming Spidey & Thor might be Doombots. This issue is just wall-to-wall crazy. So now it’s a 3-v-3 battle on the roof of The Baxter Building, the FF convinced the other heroes are an evil plot. As Thor and The Thing slug it out, the familiar sight of Spider-Man and The Human Torch chasing each other around plays out in the sky around them.

Back at The Baxter Building, DD outmaneuvers Reed long enough to hit him with an electrical charge from one of his own machines, but Reed still manages to stay ahead of him and lands a pretty big hit, while in the battle of the big guys…

Nearby, Reed is winning his fight with DD, but when he goes in for the finisher, he, too, is stopped, and we learn it’s Sue who’s stopped all the fighting. She says she’s come to stop them from making a horrible mistake, because that’s the real Daredevil.

Nice and neat! Certainly not the most substantial story of all time, but the chance to see Kirby draw a crazy crossover like this is not to be missed, especially at this point in his partnership with inker Joe Sinnott. Sinnott is widely held to be Kirby’s best inker for a reason. A little goofy, but a lot of fun.