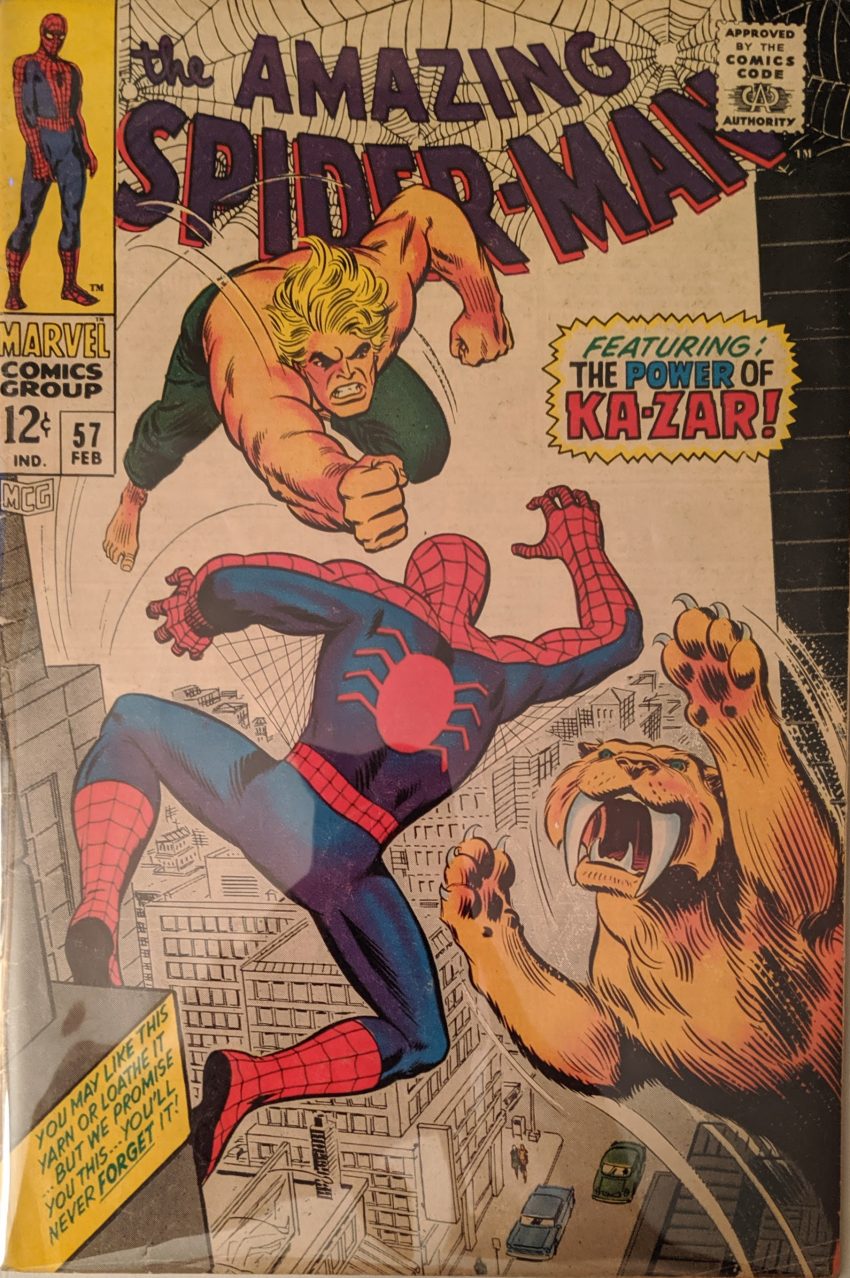 Uh-oh, it’s Ka-Zar. We’ve seen him before, right? Yes. I’m sure LORD KEVIN PLUNDER will be able to help Spidey get his memories back. And look, they promise we’ll never forget it. Let’s see! This one’s got layouts by John Romita and pencils by Don Heck, with inks by Mike Esposito. Our still-amnesiac hero has happened upon some kind of fancy dinner, and he’s starving.

Spidey finds a place to sleep in Grand Central Station. Meanwhile, Aunt May, freakin’ out with worry, passes out at home. Anna Watson finds her almost immediately, though, and calls an ambulance. While that’s going on, John Jameson has been brought before the same group from last issue, who are very mad at him for letting Spider-Man go. All except for George Stacy, that is.

There he is. When he gets to his hotel, he refuses to see anyone. But JJJ shows up immediately banging on his door. Zabu answers, and JJJ just manages not to run screaming. Then he starts trying to convince Ka-Zar to capture Spider-Man. He offers him $10,000, describes what a menace he is, etc, etc. Ka-Zar is intrigued. Meanwhile, at Peter & Harry’s apartment, Harry is feeling like maybe Peter disappeared because of how rude he’s been to him lately, and hopes to find some clue to Peter’s whereabouts in his bedroom. Instead, he finds a spider tracer.

Spidey heads to police headquarters and swings on in a window, just happening to find George Stacy & John Jameson. What luck! He explains his amnesia, and they’re open to the idea, if not convinced. But then Gwen bursts in hoping for news of Peter, and gets emotional seeing Spidey. He swears he didn’t do anything, but she doesn’t believe him. She also sets his heart racing, but now he feels more confused than ever, and takes off. Elsewhere, Ka-Zar has decided to hunt down Spider-Man. He thinks JJJ is “like a human jackal,” but had apparently decided Spidey sounds dangerous. He swings through Spidey’s recent locations, his jungle sense or whatever keeping him right on the trail.

Ka-Zar picks that moment to come smashing through JJJ’s office window, which, you know, seems pretty rude. But he does, and Jameson is furious. He starts arguing with Ka-Zar until the confused Spider-Man takes a swing at the jungle lord, and then it’s fightin’ time. Pretty late in the issue. They swing around fighting for awhile, Spidey impressed by Ka-Zar’s abilities, but no one really getting hurt. Then Zabu breaks out of his hotel room, sensing his master is in danger, and Spidey runs out of web fluid, though he barely understands that, so when Ka-Zar comes at him again, he just runs away.

Down in the park, Spidey knocks out Ka-Zar, but then Zabu lunges at him, catching him off guard and plunging him into a lake.

This amnesia bit is going on way, way longer than I ever thought it would. This seems highly unusual for a book of this vintage. Will our hero return to normal next issue? I have no idea!