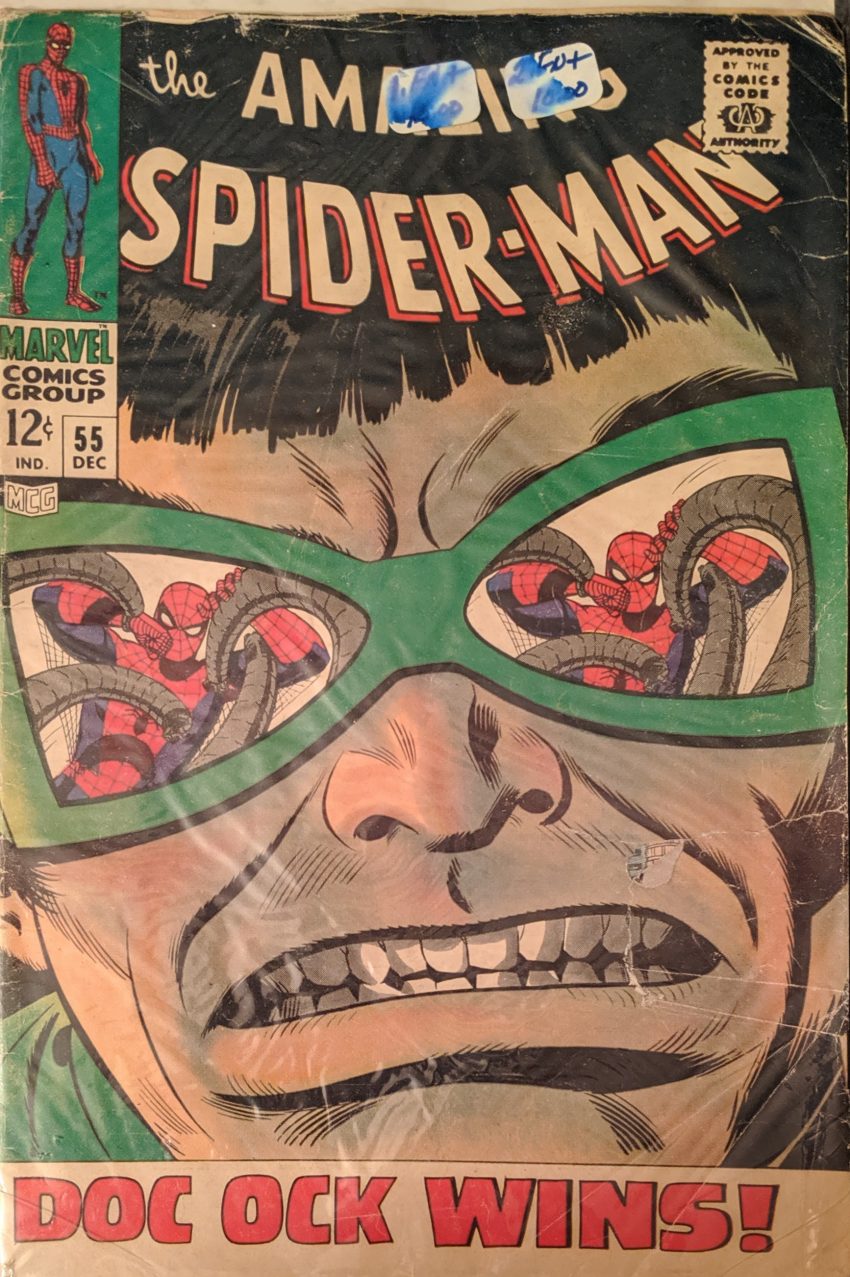 In Ye Olden Times, the precursor to the photocopier was the photostat machine. Because of this, when something was to be duplicated in printing and in comics, specifically, it was “to be statted.” If you see comics art where an image is meant to repeat, you’ll see a note from the penciler. “Stat Spider-Man from panel 2” or the like. While it was an available practice, it wasn’t too common before the 80s, so seeing what would certainly seem to be perfectly duplicated Spideys on the cover here is interesting to me. There’s some useless trivia for you, let’s get to it. Spider-Man has been tearing up the city looking for Doctor Octopus, and has found his way to a warren of Ock’s goons.

Gettin’ real Daredevil with it. Ock says he’s not hiding, he’s just too busy planning the crime of the century to be bothered with Spider-Man, then signs off, leaving Spider-Man no closer to his revenge. He tries another of Ock’s old bases, but finds nothing, and decides he might as well go check on Aunt May. We briefly cut away to a security briefing featuring our old pal John Jameson about where the Nullifier is being kept, and learn that one attendee is secretly one of Ock’s goons. Then it’s over to the Parkers. Peter arrives to find Anna Watson back from her trip and Aunt May awake and seeming ok.

On the one hand, Gwen & MJ fighting over Peter is kinda dumb, but on the other, Stan is certaily having a great time coming up with their barbs for each other. Every time there’s a scene like this, is crisp and fun. Meanwhile, Ock’s informant in the government checks in and gives him everything he needs to steal the Nullifier. He sets out in a van disguised as a power truck to commit what he once again calls the crime of the century. As John Jameson and co bring the Nullfier on its route to the safehouse, they encounter some electrical work in the road, and, well… you know…

Ock escapes his prize, and tells his goons they’re taking it to the one place the authorities would never expect: The exact same Stark munitions factory they were trying to hide it in. I’m not sure that’s the best plan, but hey, I’m not in charge.

Good to see Robbie established almost immediately as not falling for JJJ’s nonsense. Spidey happens upon the scene and realizes Ock has stolen the Nullifier, and correctly guesses where he would go with it, even, saying he knows Ock better than anyone at the crime scene. Good for you, Spidey. At the oft-mentioned Stark Industries site, Ock is getting his new weapon set up and ready to roll in his van. He pops up out of the roof of the van with it, trying it on some guards. We’re told the machine “can prevent any and all mechanical devices from operating.” that’s… something. So, like, the guards’ guns, the phone one of them’s trying to use to call security, anything. Ock seems to be achieving whatever his goal is here, so it’s about time for Spidey to show up.

The two archfoes start going at it, Ock warning his goons not to interfere. He’s out for blood this time, ready to kill Spidey, maybe for the first time. But for awhile, neither man can get much advantage over the other. Then Ock finally tags Spider-Man pretty hard.

All JJJ’s dreams have come true! Spidey is going bad! Maybe! For a bit! We’ll see how that plays out next time.