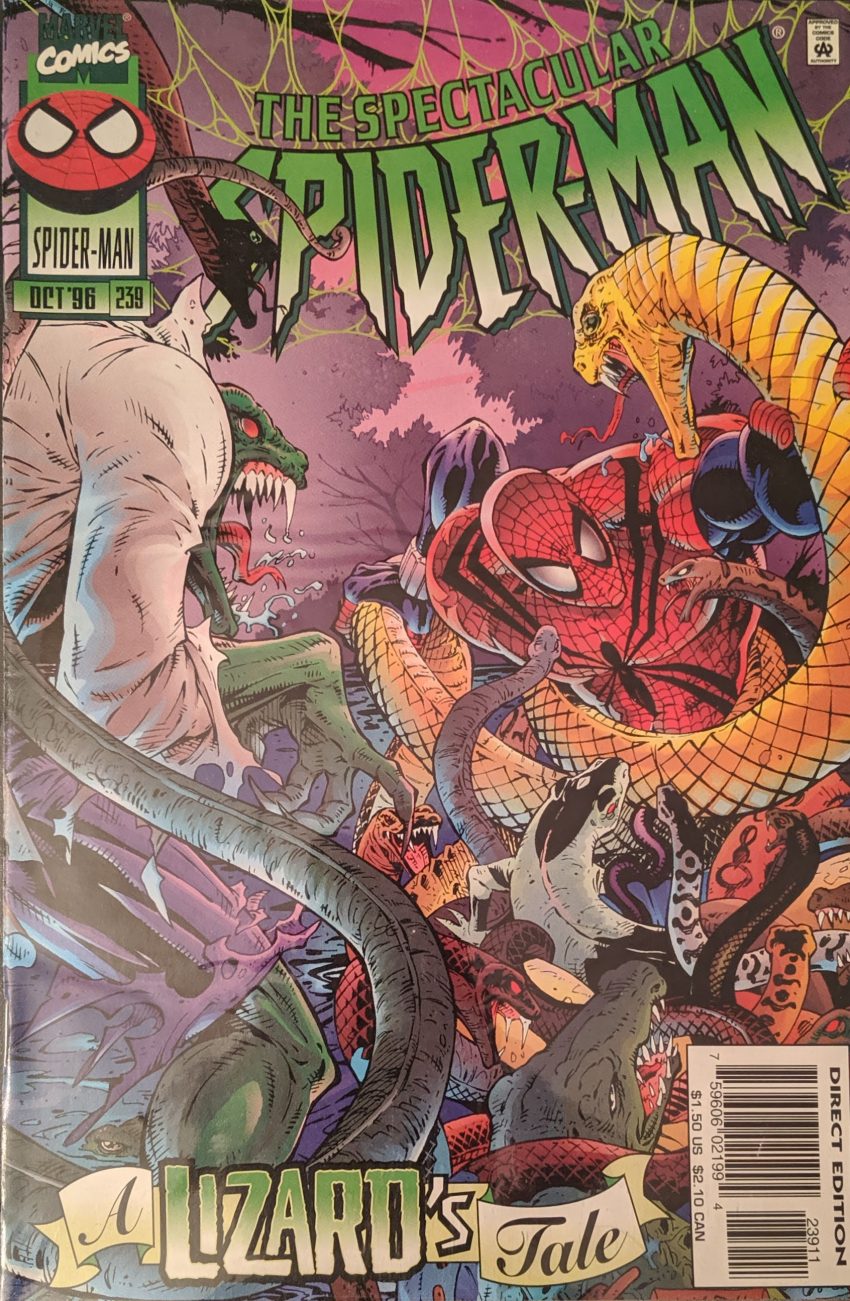 Yeah, it’s Luke Ross. That issue of Sensational was a try out, I guess. He’s here for a while. The rest of the team stays the same (For a minute) as Martha Connors, looking way younger than usual (None of these new guys know how to draw [trace] a woman older than 22), runs out to see the battlefield on her lawn. The Lizard says Connors chose to release him to protect Billy, thinking he was the lesser of two evils.

Not a single background on this page! Spider-Man recaps the last 2 issues for awhile and then the fight can begin. Ross is still aping McFarlane, of course.

Except McFarlane was at least professional enough to draw backgrounds. Ugh. Curious he’s not ripping McFarlane’s take on The Lizard more directly. Anyway, Spidey webs the corpse (?) of the other lizard behind The Lizard and uses it to trip him, sending him into a rage that sends them both crashing through the swamp and away from the house. Spidey is spewing absurd dialogue like a typical DeZago issue throughout (He actually says “That really Pearled his Harbor”).

SLAM THUNK! Nothing but tree!

Things get totally stupid from here. The Lizard is somehow pinned under this tree just by his arm. The one that doesn’t belongs to Connors. Spidey can’t get it off him in the mud, and is apparently too dumb to jump up in a tree and web it. So he tells him he has to change back to Curt or he’ll drown. He says he’d rather die, but then Spider-Man points out his telepathic hold is all that keeping the assembled critters from killing his son, so he relents. Except… when he turns back, The Lizard’s hold on the reptiles is gone, and they just leave, like you might expect, instead of dogpiling on Billy for no reason, so… what?

“Experts Forecast Grim Future” is a hilarious headline. Then, a surprise. A confusing thing. A big deal being made of Sal Buscema’s departure in the letter page… a month too late.

So, maybe Sal was going to do this issue, but wasn’t able to, for whatever reason? Maybe? I don’t know. Still, nice of them to acknowledge it, late or otherwise. Later on the letter page, they offer up an explanation for the continuity gaffe in the Dragon Man story, and it makes no sense. None. Just admit you messed up, dudes.