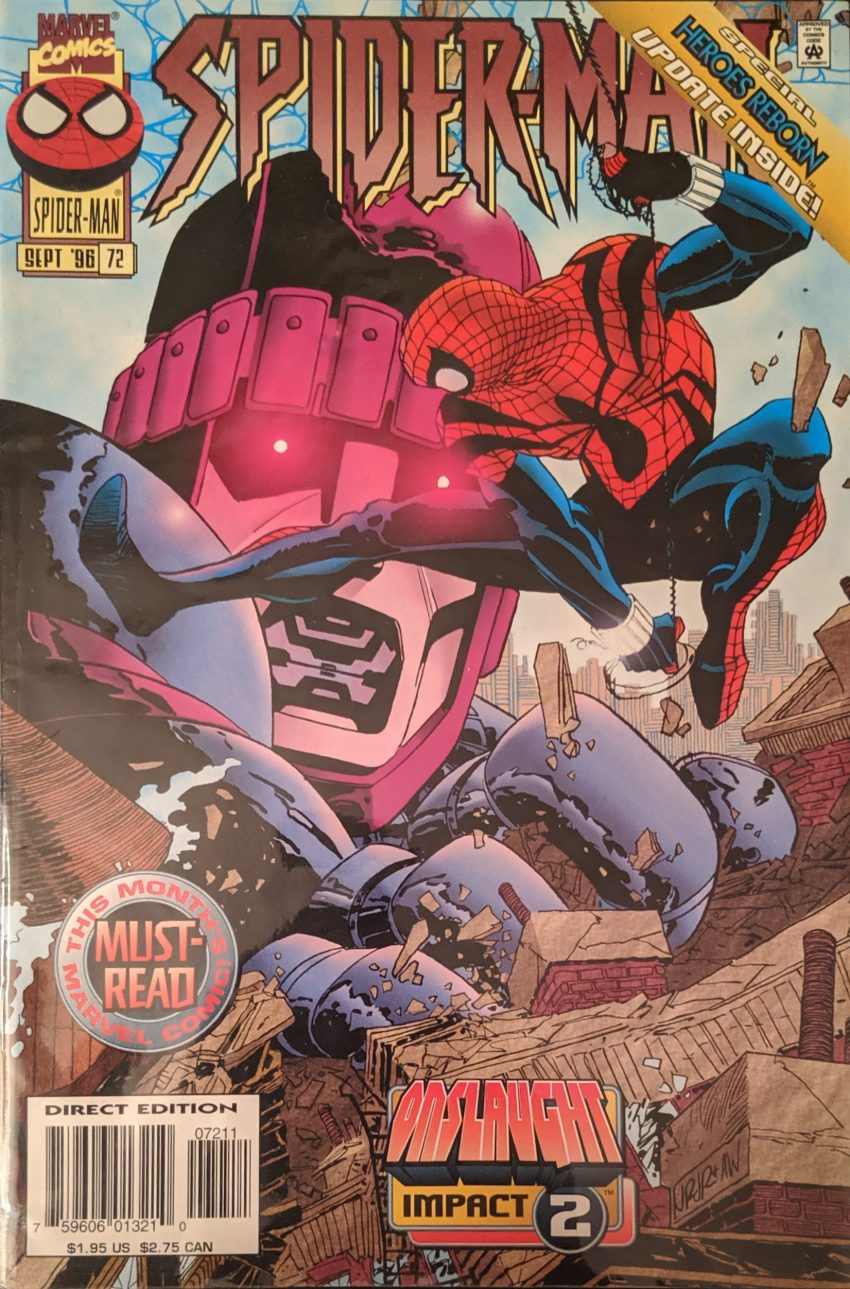 I would think this month’s “must read” comic would be something closer to the actual event, as it is nearly over, but what do I know? We open with Peter Parker: Action Photographer as he surveys the situation in the kind of amazing 2-page spread Romita, Jr. excels at.

Things look pretty bad! Then, in another 2-page spread, he sees something that still must be pretty surreal for him: Spider-Man in action, being chased by sentinels. Peter decides he has to try to help him, and follows after them. In yet another 2-page spread, Spidey takes a stand against his pursuers, but it doesn’t go well.

Peter throws some debris at the sentinel to distract it long enough for Spidey to break free, and then he swoops down and picks up his “brother” so they can flee together. But a sentinel tags Spider-Man, and he blacks out, forcing Peter to grab his wrists and web them up a parachute. In a bit that is far too cute, they fall down into a smokestack… just like the kind Spider-Man threw his clone down all those years ago. What a coincidence! Spidey eventually wakes up, and the sentinels have stopped bothering them for now. Then Spidey tears up the floor and finds access to the sewer, and they head down there to escape.

The sentinels come for him pretty much immediately, 3 of them, and Spider-Man gets to work. He uses that big pipe to sever one of their hands before tossing it through the head. But then another one picks him up and starts electrocuting him. Until a sort of web lasso appears around its head…

Well, then. How was this the must read comic of the month? It was mostly just 2-page spreads, and mostly a fight scene. Was it because the “clone” Peter took a pretty heroic turn? Could it be they were hyping you up for his imminent return to Spidey-ing? Maybe. It looked cool, at least. The letter column promises one fan that all lingering clone questions will be cleared up in the upcoming “Book of Revelations” crossover. That’s not really true, as it turns out, but… kinda!

Soooo, right… uh. In the Marvel Universe, what’s goin’ on is Professor X mindwiped Magneto a few years ago and now there’s an evil thing growing in his brain that’s all the worst parts of himself and Magneto that has manifested as the world-threatening menace of Onslaught. While it has been simmering in the X-Books for a long time, it now widens to the whole Marvel line for a month or two. It will take the combined might of the entire Marvel Universe to fight him, and even that won’t really be enough. But, in real life, what’s going on is Marvel struck a deal with Jim Lee and Rob Liefeld, two of the 7 artists who quit Marvel to form Image Comics in 1991, to come back and inject some excitement into the sagging sales of some of their flagship titles. Lee and his studio will take over Fantastic Four and Iron Man, while Liefeld and his will bring ugly art and terrible stories to Captain America and The Avengers. How will they do this? Onslaught! All those heroes and a few more besides will appear to die, sacrificing themselves to defeat Onslaught, while actually being transported to a pocket dimension created by the near omnipotent Franklin Richards, where they can be rebooted from scratch for about a year before being merged back into the Marvel U proper. This would be called “Heroes Reborn.” Complicated! As for me, I’d long-since abandoned The X-Men by this point, so Onslaught was largely something happening Over There. When it invaded two of this month’s Spidey titles, I was mostly just annoyed. I didn’t actually read the event until years later. I did read 3 of the 4 books the Image guys relaunched, though. Begrudgingly, in the case of Rob Liefeld’s dreadful Captain America. Heroes Reborn ended in an event called Heroes Return, um, returning the characters to regular continuity. The stunt actually worked, too. While the Heroes Reborn comics weren’t very good, they did reignite interest in the properties, and when they came back to regular Marvel with better creative teams, that momentum continued. In some ways, this may actually be a stepping stone on the way to the Marvel Cinematic Universe. As mentioned in the Marvel Vs. DC posts, a lot of Marvel’s classic characters didn’t get much respect for a long time, and riding high on a much-hyped event and then critically acclaimed returns to the Marvel U helped upped their profile and keep it that way, which had to make them more viable movie stars. Funny how it all works out.