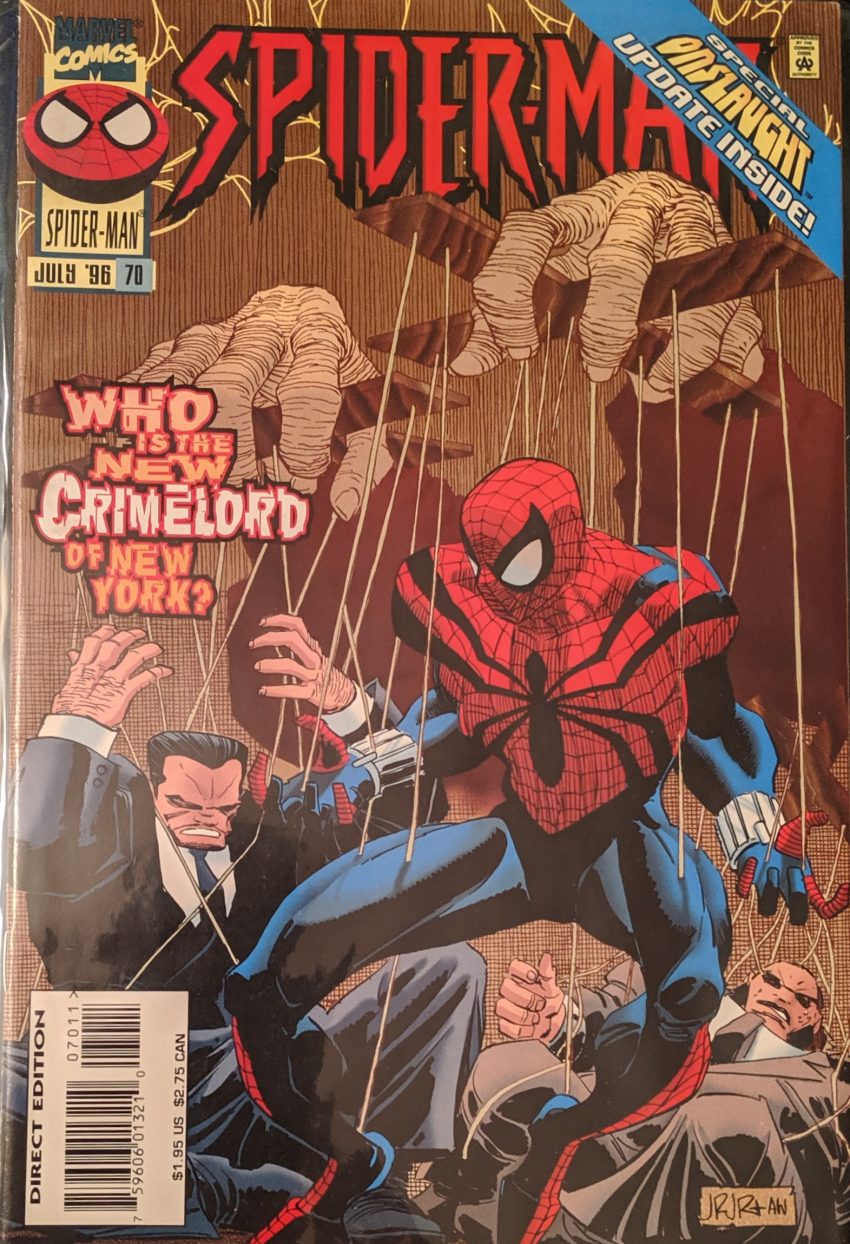 Oh no, this one has something bound in. Surely not another 23-year old Kool-Aid packet. Yes, that’s exactly what it is. Same flavor, too. Could’ve at least given me some variety, guys. I still hate this costume for Spider-Man. I hate the dumb little not-boots. I hate some fingers being red and some not. But I also hate the whole shirt being red. It makes him feel top heavy. And they just kept coming back to this, whether it was DeFalco & Frenz’s alternate future child of Peter & MJ as Spider-Girl in “Uncle Ben’s” suit, or the Superior Spider-Man costume which is more or less just this, only vaguely evil looking. Blah. Not the worst Spider-Man suit (Easily the hideous gold & red “Iron Spider” costume), but surely not the best.

At any rate, as tends to happen every few years, Kingpin has lost control of the underworld (I suppose in Daredevil 300, though he may have come back and lost it again since then). And as tends to happen somewhat less often, but still often, a random brand-new big bad mob boss has risen to take his place, seemingly out of nowhere, yet with all the resources he needs. Somehow. Here he is!

Haha, ok! Fortunato is one of the few things from this era I remember, and something else coming up shortly. Look at Romita, Jr going bananas with the tech. He’s the true artistic heir to Kirby in so many ways, if you asked me, and big insane tech that looks like it could actually work is certainly one of them. He is, of course, still working with Howard Mackie, Al Williamson & Kevin Tinsley in this period. Elsewhere in the city, we catch up with Ben Urich and Peter Parker hot on the trail of a story. But Ben has jumped from one rooftop to another, and Peter is scared to follow without his spider powers.

I miss you, real Spider-Man costume draw by JRJR. See you soon. Urich is awfully spry for his age. But we cut away from them to later (I guess? It’s suddenly raining) as Ben Reilly gets off work and has a fateful meeting.

We pause here for Kool-Aid, and then Ben sees the big guy get attacked by mobsters with high tech weapons. The big guy pushes him down and tells him to play dead and he engages his pursuers. He tells Ben to run and forget he ever saw this, but you know what’ll happen instead. Not yet, though, as we zip over to Hong Kong, and the office of… Arthur Stacy. Yeah, Gwen’s seldom seen uncle from back in the 60s. As we’ve seen, he lived in the UK back then, but we’re told he now has a successful career “in the international intelligence community” with an unnamed partner.

If you thought making up a daughter of the guy who shot Uncle Ben was a bad idea, wait’ll you see where this goes. Whatever happened to Gwen Stacy’s mother? Who was she? Why’s no one ever tossed some details in there? No time to dwell on that, Peter & Ben have just walked right into the building the mob is meeting in! What?

Nice stache, Hammerhead! As the deal turns into a doublecross, the guns come out, Hammerhead’s goons meet a quick end, and even Hammerhead himself is soon in big trouble.

Oh no, he has a list! On the other side of town, the big guy, called “Jimmy” by his pursuers, is in trouble, cornered and being shot at. They say they were all friends until he turned his back on them and ask him why he thought he could walk away as they close in to kill him. Lucky for him, though…

Love what Williamson is doing with the rain in these pages. Elsewhere, Peter & Ben are fleeing the mob meeting in a hail of laser fire, but Peter seems to be having a good time, chiding Ben for not feeling the excitement of the moment. They try to jump in a cab to escape, but the cabbie says he’s on break… until the lasers start coming, and then he peels out. Back at the other laser fight, Spider-Man wades into the various goons, joking and having fun like he’s supposed to.

Goons dealt with, Spidey heads back to find Jimmy fleeing. He say he just wanted to help, but Jimmy obviously doesn’t trust him, saying Spidey should arrest him or leave him alone. Thusly…

And so, Ben Reilly makes an unusual new friend, who we will soon come to know as Jimmy Six. Why is he so keen to be pals with a guy who is obviously a mobster? Maybe he’ll explain as we go, Jimmy will be around for awhile. But that’s not all!

This is it! After all these years, this is how Spider-Man goes out! Probably! We’ll see next time.