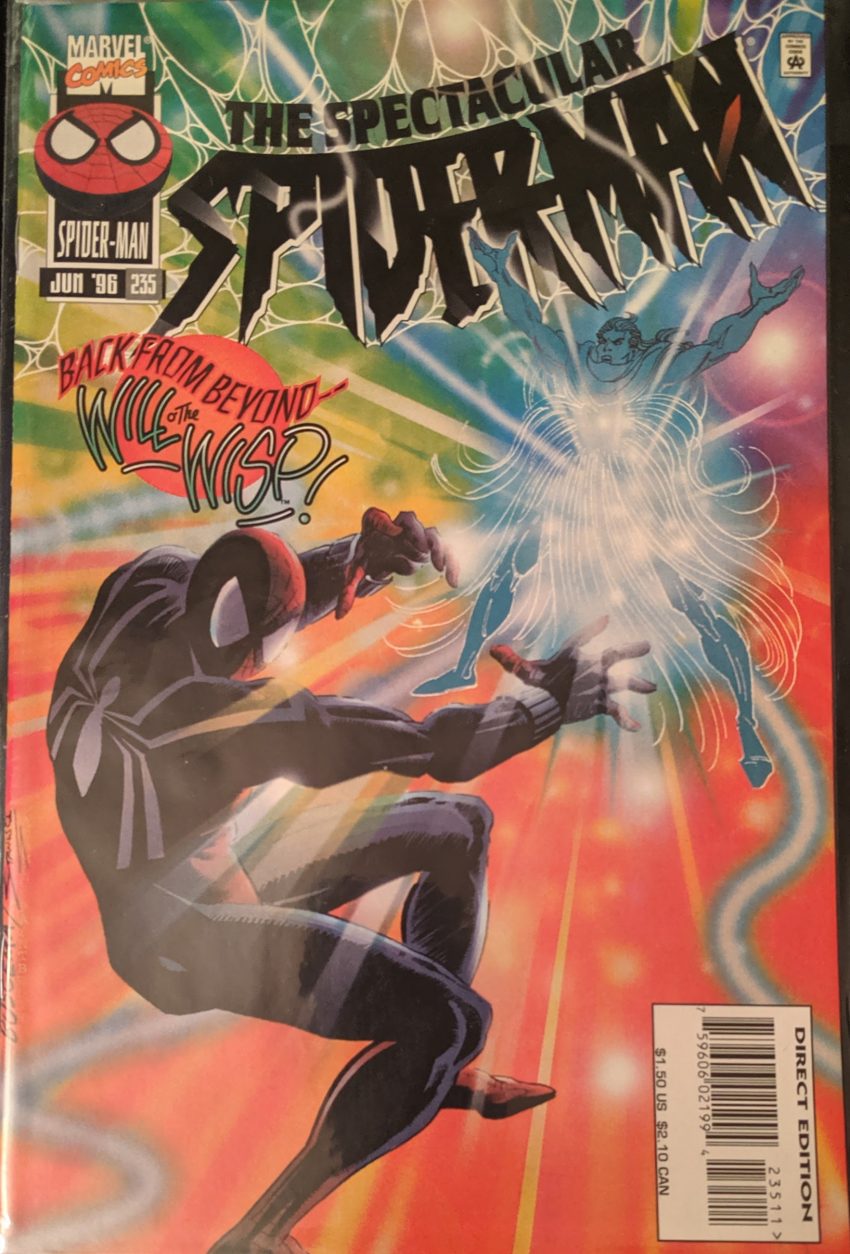 Ok, gang, let’s have some fun with our pal, The Spectacular Spider-Man!

Wait, what? This is page one!

Sal, what on Earth is going on with that guy in the hat?

Whew. Ok. Well… uh… welcome to this issue, I guess. As Ben makes it to the roof, he is picked up and whisked away by Will O’ The Wisp in a big 2-page spread. The credits say “Sal Buscema, John Stanisci & Todd DeZago – Story & Art.” Interesting. Not often the writer is listed last. Also John Kalisz is still hanging in there on colors. Anyway…

Ben, of course, has no idea who this is, and once again wishes he knew more about Peter’s time as Spider-Man. Lucky for him, Will has never been one for pleasantries, and he gets right to it: Jonas Harrow has implanted some thingie in him that’s forcing him to do the mad doctor’s bidding, and he needs help. Harrow begins pulling him away before he can really talk, so he says to meet him at State University (Not to be confused with Empire State University, though it sure is easy to do so) tomorrow at midnight. That is a very 1970s start to a Spidey plot. Ben heads home to his completely empty apartment (You will recall how everything he owns was rather comically stolen) to call Peter, who’s at work at The Bugle. Pete fills him in on Will O’ The Wisp’s deal while some Komedy Business happens with an overworked intern in the background, and then Ben decides to go try to help Will.

Will looks a lot more 90s these days. Roxxon. Have they appeared in these pages yet? Surely they have, I’m just blanking right now. Marvel’s all-purpose, go-to evil megacorporation, always up to something nefarious. Anyway, Ben finds his guy, but he didn’t come to talk, he came to do Harrow’s job. He explains than he literally has to do it, or he’ll be killed, so he is implementing Roxxon’s nefarious plan as he explains that Spidey has to go to Rye to stop them tomorrow at 1am, while Will is out on his final errand. Then he’s called back and vanishes, so Spidey leaves, too.

So, what, they just left everything they own out there? Where do they live now? Did they break their lease over the phone? Seems really rushed and awkward. Oh, well, that mysterious pain documented, we’re off to Spidey, who is not going to Rye, but has instead shown up to Iron Rock, a “mega-maximum security government installation” that Will said was his final target. He has to break in to this thing, but he’s Spider-Man, so he’s able.

Well, this plan worked out. Back at Roxxon, Harrow confirms Will did his job, and now it’s time to “bring both of them home.” As Will is summoned away, Spidey urges him to try to get rid of the implant like he suggested, but Will says fighting the summons is incredibly painful.

Dragon Man! A synthetic being created by a scientist in Fantastic Four, frequently manipulated and controlled by bad guys but not bad at heart, he’s here to be manipulated and controlled by Jonas Harrow. We’ll see how that goes next issue. Here’s the thing, though: TAC 236 is a direct continuation of this Spider-Man story. It is ALSO a direct continuation of next month’s Peter Parker subplot. There is no logical place to read it! Great job, editorial! We will pick it up in publication order. I dunno, man, I just work here.

In the letter column, a dumb dumb by the name of Larry J. King is outraged that Marvel dared publish a story implying pollution is bad, referring to that bizarre “DK” story in TAC 230. “Americans are already being over-regulated,” Larry claimed, presumably coming down firmly on the pro-“goop that turns people into a monster” side of the environmental debate. Larry also took issue with the bad guy in that story having a cross on his mirror in the car. “Bashing Christians, now, are we? Watch it. You’re treading on thin ice as it is.” This guy is probably dead now. Not of old age, though he claims to have been a fan for 30 years in this almost-25-year old letter page, but rather because the launch of FOX News just months after this issue came out may have been too much joy for his heart to handle. He seems like the target audience. I bet his blood got up every time Roxxon was portrayed as evil in his 30 years of reading. If you’re still out there, Larry, keep licking that boot!

This month also saw publication of a one-shot called Spider-Man: Legacy of Evil, about the history of the Osborns. It starred Ben Urich & Spider-Man… Peter Parker. I really have no idea where that should go in the timeline. It has to be before Ben took over, since they were still pretending to the world that Ben was Spidey forever at this point, but… when? I really don’t know. I’m gonna have to jam it into a block somewhere in the future.