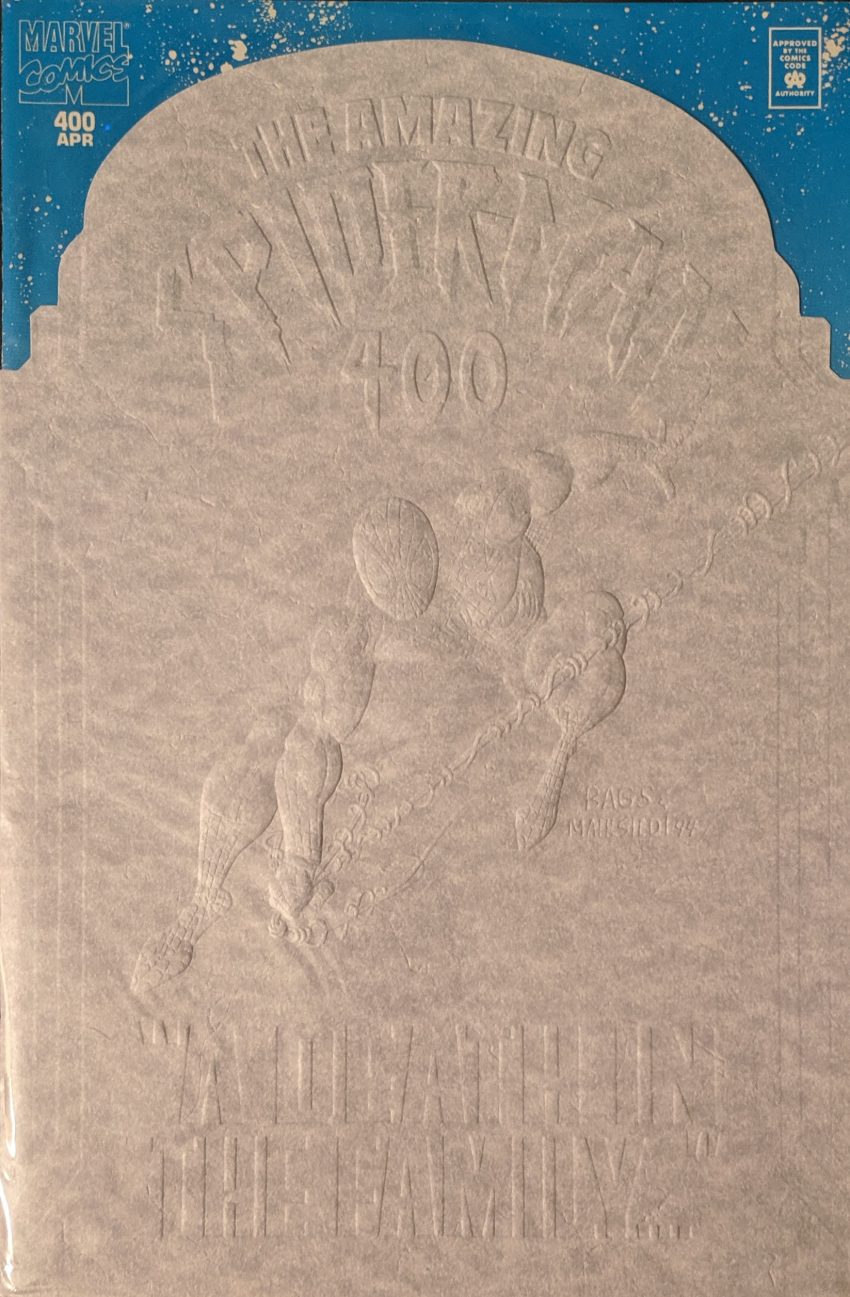 I’m told this cover was not actually supposed to be completely impossible to see. That they used the wrong kind of paper stock, so the embossed image and text (Which says “A Death In The Family” in addition to the logo, a phrase literally any comics fan of the period would associate with the death of Batman’s 2nd Robin, Jason Todd, so good choice) weren’t supposed to vanish into gray nothing. But they sure did! Not the best way to kick off this 400th anniversary milestone. Behind the tombstone, a 2nd Spider-Man.

The whole tale he so frequently repeated simply did not happen. The notion that Martin Goodman was somehow against heroes with regular problems is the weirdest bit, considering that was Fantastic Four’s big hook a year prior, kicking off The Marvel Age of Comics. But, Stan was Stan. Best not to devote too much time to that here. Maybe when I get to Amazing Fantasy 15 someday. Right now, we gotta see who dies, and if you don’t know, I assume you can guess. We open on Spider-Man swinging through the city as fast as humanly possible to get to the hospital where Aunt May is. As Jacob Raven silently watches from down the hall, when he asks Dr. Caputo how she’s doing, the doc says to ask her himself.

Yeah, Ben, what are you thinking? You’re so irresponsible. Not like Peter. Peter would never do something to endanger his sick aunt, like barge into the hospital room where she’s recovering from a heart attack in his Spidey suit, only to cause a second heart attack like the world’s stupidest stupid, no sir. He’s responsible. Anyway, Ben swings off, brooding about how he doesn’t belong here, how he came here for May and now that she’s better, he should leave, but doesn’t want to. Then he catches a glimpse of Kaine in the lightning of the evening’s storm, and thinks he still doesn’t know why Kaine has been haunting him all these years. Then we switch to The Jackal in Ravencroft, playing up being crazy. He stops raging just long enough to tell a passing guard he’s here because he wants to be and try to scare him before going back to screaming. Who cares about that, we care about this:

She’s got an Aunt May Sense! Peter worries that maybe he’s not capable of being happy (Never change, JM!) when Ben shows up, all kitted out as The Scarlet Spider in broad daylight, and says they need to talk. And then Peter takes him outside to talk… ALSO in costume! What a couple of dumb dumbs. They really are the same person.

–again. And he bounds away. Would that that were the end of it. As Spider-Man watches him go instead of getting inside before someone sees him, Aunt May and MJ talk about how long it took her & Anna to get MJ & Peter together, but how MJ & Peter were “always best friends.” Uh… Ok. I mean, not really, like, at all, but… ok. I get it. We’re being nostalgic, that rarely involves reality. May says the baby is blessed to have MJ for a mother, and MJ says they’re blessed to have May. Then Mary Jane and Peter watch some old home movies of him as a small child.

My gripes with DeMatteis are no secret around here, but maybe the biggest is, he can do this scene. He can write really enjoyable human drama stuff. He can write a very human Aunt May. Why did he insist on all that idiotic darkness and death all the time? A “normal” Spider-Man comic with our hero out crackin’ jokes and coming home to this sort of deeper interaction with his loved ones would’ve been optimal, and a radical move in 1994. But, no, we gotta do grim-dark sadness fests as often as possible. A wasted opportunity. Aaaaaanyway, that’s Mr. Nacht, part of Judas Traveller’s goth band, and he’s transmitting a report on Peter & Ben to his boss, who says they will soon resume their “little intrusion” into the lives of Peter & Ben. Huzzah. Meanwhile, Ben packs his bags, thinking about his mysterious past and being sad. Hey, remember that 3rd Peter? What’s he doing?

The cop sets off his Spider Sense, which he doesn’t know he has, causing him to leap up the side of a building just like the real Peter did back when he discovered his own powers, and now he’s kinda scared to find out who he really is. I don’t remember where this goes, but it has to be disappointing. Who cares about that, we care about a week later, as Peter takes May up to the top of the Empire State Building, where she thinks aloud about Uncle Ben. Peter asks if she still misses him, as if there could possibly be any answer other than “yes,” and she goes silent.

Simply impossible. Simply IMPOSSIBLE. Some retcons are fine, adding new insight to the past or connecting some dots (Like the little ones Roger Stern tended to do to better explain weird old stories). Some are downright miraculous, pulling off a change that’s extremely positive and enriches the property (Like Bucky suddenly not being dead after 40 years. Sounds like a disaster in theory, but it worked perfectly). Others are just nonsense. As I’ve often said, it can be fun to look at MJ’s old appearances and see if she could know. MJ didn’t seem to think much of Spider-Man either way, which actually makes it more plausible that she knew, her downplaying this bizarre person who’s constantly on their campus or whatever. There’s some room to play there. But Aunt May hated Spider-Man. Was terrified of him. There are some stories where that is crucial to the plot. We’ve seen a comic where she shot him! There’s one story where she overcame that fear that was a watershed moment for her. You can’t just pretend that didn’t happen because you wanted to have this nice moment now. It doesn’t fly. Sorry. Anyway.

The End. Just kidding, of course not. Peter and the Watsons cry, Ben cries up on the roof, much is the weeping, then we skip ahead to the funeral, which is handled silently.

Hey, wow, that’s Felicia Hardy, did I ever notice that before? When everyone’s gone, Ben Reilly comes to the grave to leave a rose, wearing a bandana around his neck like a cowboy, ruining any power the scene might have. What in the world was that? But wait, there’s more!

Well, that was a weirdly ominous ending for no reason! Why would Ben look all mean for anything other than fake shock value? The fallout from this nonsense will have to wait, because I’m cuttin’ it here for this block. I know! To walk away from this shocking ending! But, whatever, we’ve already seen the future. Trust me, none of this pays off in even a remotely satisfying way, it can wait.

In that Comic Book Creators On Spider-Man book (Which I feel I may reference a lot before this is over), JM DeMatteis says he loves Aunt May, and loved writing her, and you get that feeling in the moments presented here. It was still pretty unusual for Aunt May to be much more than a cartoon character even as late as 1994, but she did feel more grounded here. Makes you wonder why he’d kill her off. But, then, he seems to love nothing more than killing off icons of the Spider-World, for some reason. I dunno.

But this is a 400th anniversary extravaganza, we’re not done! There’s 2 more stories in here, and the next one is that rare treat, John Romitas Jr. & Sr. working together! No matter how dopey the story is, it’s worth looking at the art. Last time we saw the Romitas work together, John Jr. was still early in his career, still finding his voice, but now, he’s one of the most unique and exciting artists in the field. With the sure hand of his dad inking him, he can’t lose. They’re joined by DeMatteis and colorist Paul Becton, and they’re gonna tell us what happened to Ben right after he realized he was the clone back in the day, shortly after the backups in the “Power and Responsibility” crossover.

John Romita, Jr. draws a lotta rain. He doesn’t draw the way rain looks; he draws the way rain FEELS. One of my favorite things he does.

Grim-dark sad sad sad, the usual, whatever, look at him stopping that truck. That’s the stuff, man.

Blah blah blah.  John Romita, Sr. is such a pivotal part of Marvel history as a penciler, but he’s such a top notch inker, too. These guys make such a fantastic team. Ben goes and sleeps under the bridge Gwen died on, just to pile on the ridiculousness, and then the next day he sneaks into Peter’s apartment, steals some clothes he/they had been meaning to donate, keeps the Spidey mask & gloves he had back when he was introduced, and heads out for parts unknown. This backup will continue into the other titles, so good luck remembering this next time we revisit this era. Gorgeous, though. Aaaaand finally, we have another treat, Stan Lee’s first ASM scripting job since Annual 19. He scripts over a plot by DeMatteis, with pencils by Tom Grummet, inks by Al Milgrom and colors by Chia-Chi Wang. Now we’re revisiting the night Uncle Ben died. We begin with Spidey apprehending the burglar, which much less dialogue, and then we move on to the morning after. Peter wakes from a nightmare wracked with guilt. He goes downstairs to comfort his grieving aunt.

Pretty somber, understandably. And pretty short. Probably can’t get Stan to do too much at this time, what with him off in Hollywood. But kinda interesting to have him script this previously unseen time in Spidey history. And that’s it! Next post, we jump back to the even more complicated world of 1996, as Peter and Ben continue their quest for a truth that even their monthly writers don’t know at the time.