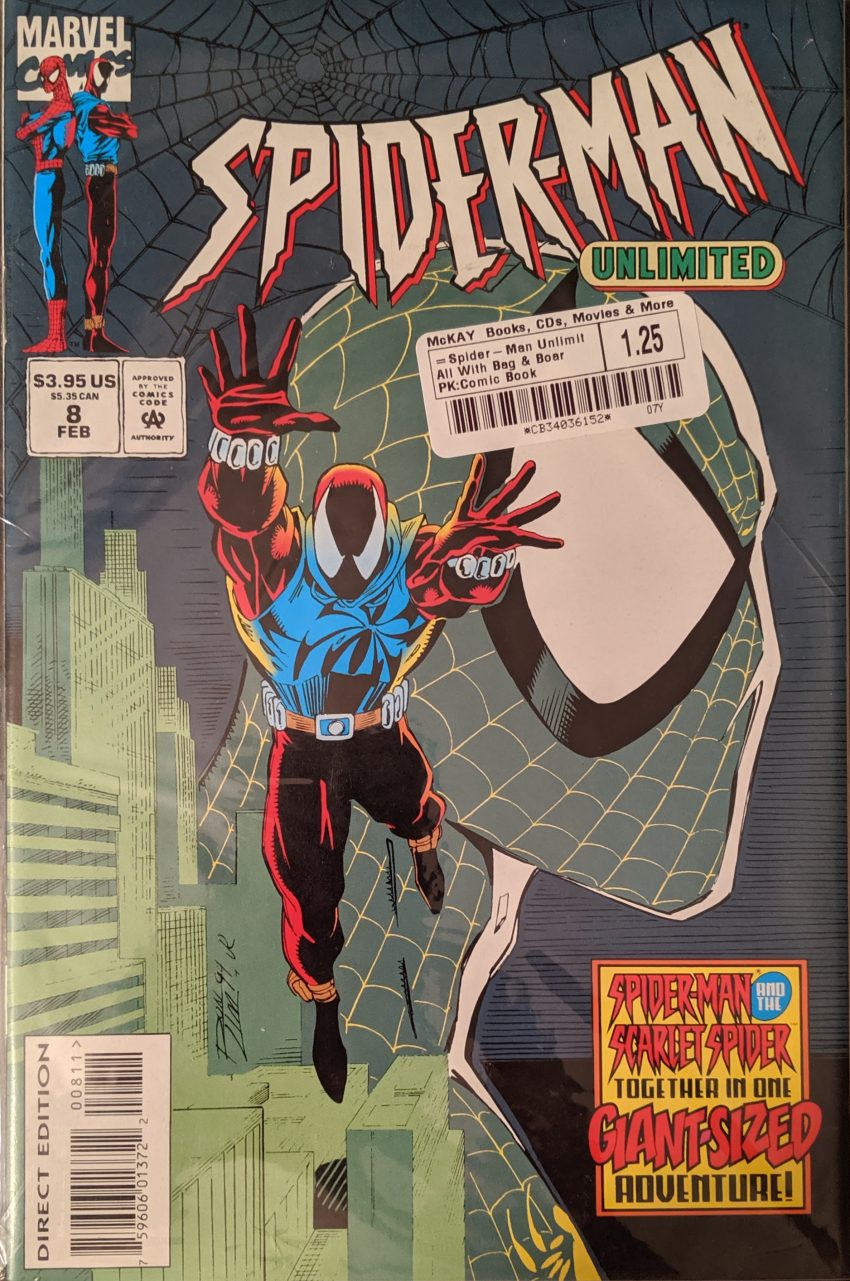 I hope this giant-size adventure isn’t horrendous. I’m trying to stay awake, here. WEB artist Tom Lyle writes, Ron Lim provides breakdowns, no fewer than 4 people ink (Tom Palmer, Al Milgrom, Scott Hanna and someone I don’t know, and buddy, those diverse names mean the art style is gonna be all over the place), John Kalisz colors. Another thing that’s gonna be weird about this one is it seems to heavily feature The Twin Towers. 1994, man. Anyway, we begin with some gold armored goons rushing out of the subway (Were they actually taking the subway?) on their way to assault the towers. And wouldn’t you know it, having dinner at the Skyline Restaurant atop one of them is Mary Jane Watson-Parker, out with heretofore unseen pal Carly, when the gold guys burst in, shooting at random, seemingly having fun.

The goons finally identify themselves as Terror Unlimited and keep babbling like a bunch of bros. Elsewhere, Ben Reilly is walking home and runs into Rich Gannon, from the debacle in the previous issue of SMU, who says he got his old job back, is living in the hotel, and is doing well, and he credits Ben with getting the ball rolling on that. So that’s nice. Inside, Ben sees in the paper that Doc Ock is dead, and decides he needs to get out and swing around to clear his head. Meanwhile, Spider-Man gets home from swinging around himself, finds a note from MJ letting him know she’s out to dinner, and goes to sleep, no way of knowing she’s in trouble.

Pretty standard cop movie negotiation stuff until Terror Uninteresting shoots some missiles out the window to prove they’re serious, blowing up The South Street Mission. The very place Ben Reilly’s pal Rich was going to volunteer. Then the goofballs announce that they have a nuke. Really? Who are these idiots? Why are they so well equipped? Ben Reilly hears the KA-WHOOM! Of their explosion and heads for The Twin Towers. Now we just have to figure out how to get Spider-Man there. First, though, both Ben Urich and Ken Ellis head down to cover different aspects of the standoff. Speaking of…

Somehow, that guy was sniped out of the air by a security guard. Like, with a handgun. Ooooohkay. The main goons go grab him. Then they’re informed the one that got shot down had their detonator, so they toss the guard out the window in anger. You probably think The Scarlet Spider will swing in and catch him. I did, too. He does not.

It’s all cliches around here. These issues are Tom Lyle’s first time writing anything, and he is pretty green. Ben is very sad, of course, but there’s more people who need his help, so he keeps going through the rubble, unearthing people luckier than Rich. When he’s done, someone tells him what happened, and he swings off toward the towers, Ken Ellis trailing behind yelling questions at him.

I realize these dudes call their goons “drones” and that does not imply much respect, but this seems a bit over the top. If you can just casually shoot your own dudes, if they’re that unimportant to your plan, why bring them? MJ sees a spiderman climbing the other tower and assumes it’s her husband, so she goes to try to help the guy who got shot while waiting for him to get here. But he’s at home, having a shower. However, he’s got the radio on, and hears about the plot going on where his wife was, so Spider-Man finally makes an entrance. Well, sort of. As he swings out, we go see Ken Ellis, no one’s favorite character.

Ok. The Golden Girls finally get around to sending some goons to retrieve their detonator, and then fire a missile at a news helicopter outside just as Spider-Man is arriving on the scene.

He webs up the rotors so the helicopter doesn’t slice through his web and it’s mission accomplished. Down on the ground, that Carr guy tells him the deal, and then he’s off to save his wife and the rest of them. Meanwhile, Ben’s followed the guys setting up the nuke in the other building.

Downstairs, Ken Ellis, America’s least favorite reporter, somehow sneaks into the tower past all the cops, and takes an elevator up to try to talk to the bad guys. What an idiot. Over in the other building, the other goons have arrived with the detonator, and descend into the elevator shaft to meet up with their bros, when The Scarlet Spider attacks… making one of them drop the detonator.

That spin kick is a cool panel.

If you’re wondering who that kid’s daddy is, well, so am I. The guy who got shot, maybe? What happened to him? This is a real mess of a story. Not helping matters, Scarlet Spider has hidden the detonator in his tower when he happens on Carr and some cops rushing one of the Terror Unlimited leaders… who were both in the other building? Their bullets bounce off his armor, so Ben jumps in.

While in the other tower…

Does this guy not think he’ll get nuked, too? Does he, like, know anything about nuclear weapons? Does Tom Lyle? Spidey webs the switch, not knowing Ben took care of the bomb, and then webs the moron Ellis out of the way so he can beat up the other moron. And so he does.

Over in the air next to the other tower, Ben finishes his idiot off, too, knocking him out and bringing him to Carr.

I’m gonna guess the only pages Scott Hanna inked were those last 2. They’re much sharper than the rest of the book. And that’s that. Not great! You will be shocked to hear this was Terror Unlimited’s only appearance. Who were they? Who cares? But it is kind interesting how they managed to have both Spider-Men appear in the same story without actually interacting yet. Saving that reunion for the more important books.