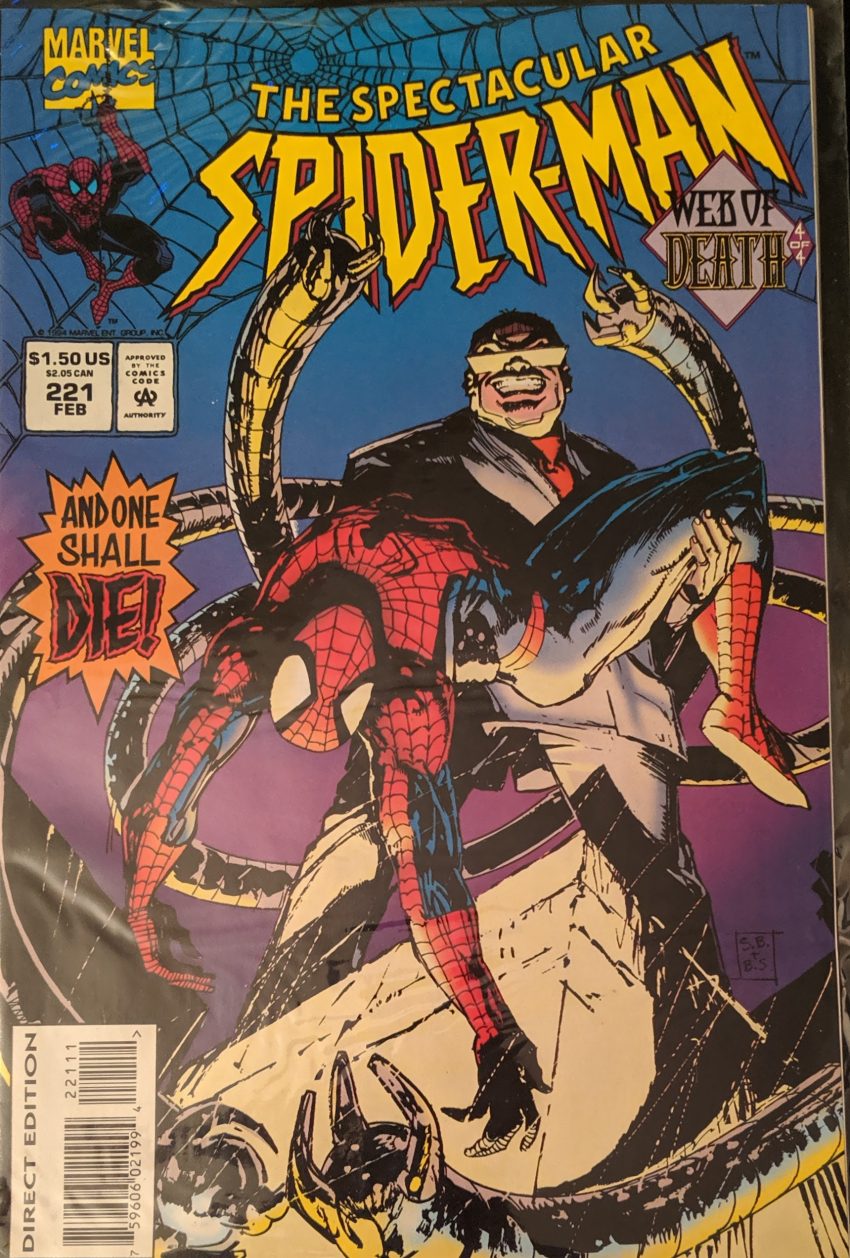 It’s a happy reunion until Ghost Peter starts convulsing. Back in the real world, we see Doc Ock trying to shock him back to life. Ock thinks that the virus is in full remission, but Peter’s suffered heart failure, and now only he can save himself. In the spirit world or whatever, Peter starts spiraling down toward Earth when he’s stopped by his best buddy, Harry Osborn, still somewhat recently deceased at this time. He says his family lacks the will to hold him here, that they aren’t sure he belongs.

Well, that came out way creepier with Seinkiewicz on board. Meanwhile, on Earth, it’s makeout time:

Otto’s kissin’ everybody! Stunner heads out to her assigned duty, Kaine watching as always, saying tragedy is coming for her, while back in the lab, Peter wakes up and is understandably not sure what’s supposed to happen now, something Ock is really enjoying.

And then the cops show up! Otto sent Stunner to call them, and man, did they get here fast. Otto says he intends to go quietly and offers them a beverage, even. Excellent host. As he’s lead away, he says he wants Spider-Man to recover, so he’ll be at peak performance for their next encounter. More than a little ridiculous.

Absurd. There is some fun to be had in Ock saving Spider-Man’s life after all these years, sure, but it just doesn’t jibe with his character. Spidey swings off, thinking he should be worried about Ock attacking MJ or Aunt May, but “honestly, I can’t see him crossing that line.” Well, you should read Parallel Lives, then, I guess, and maybe Tom DeFalco should, too. Spidey thinks about how it’s great to be alive and they’re having a baby and this calls for a celebration. Back at the crib… Mary Jane is cleaning the house in a tube top and Daisy Dukes. Ok! Gotta get your kicks somehow, Sal, I guess. She’s worrying about the future when Peter arrives.

How nice for them to enjoy this temporary happiness. Elsewhere, Stunner is prepping to break Doc Ock out of jail before he even gets there, but then Kaine lobs a gas grenade at her, taking her out for the evening. In the van, Ock is telling all the SWAT guys their weapons mean nothing to him and his escape is inevitable, and that would be normal in any other story, but it’s 1994, so Kaine rips through the top of the van.

“I’m possibly the greatest villain in the history of Spider-Man comics!” “Well, I’m a dumb scrub meant to capitalize on the current appetite for grim-dark killing machines!”

You see where it’s going.

Yeah. Jobbing out Grim Hunter to Kaine was one thing, but this? This is sacrilege. Danny Fingroth seemed so proud of this in that Collector’s Preview, where they straight up told you Kaine would kill Ock in this issue. As if removing Spider-Man’s best villain from the toybox was somehow a great idea. And, of course, he didn’t stay dead. Why would he? But, honestly, he’s never really been the same since. From mediocre stories upon his return to suddenly dressing like a vampire for some reason to eventually “dying” for ages and ages, every appearance billed as his final scheme before death, and yet he just kept coming back in increasingly absurd stories, to becoming “The Superior Spider-Man,” an apparently very popular concept I think is incredibly stupid. Doc Ock may have come back from the dead, but he never really recovered. Some legacy, Danny. Nothing to be proud of.