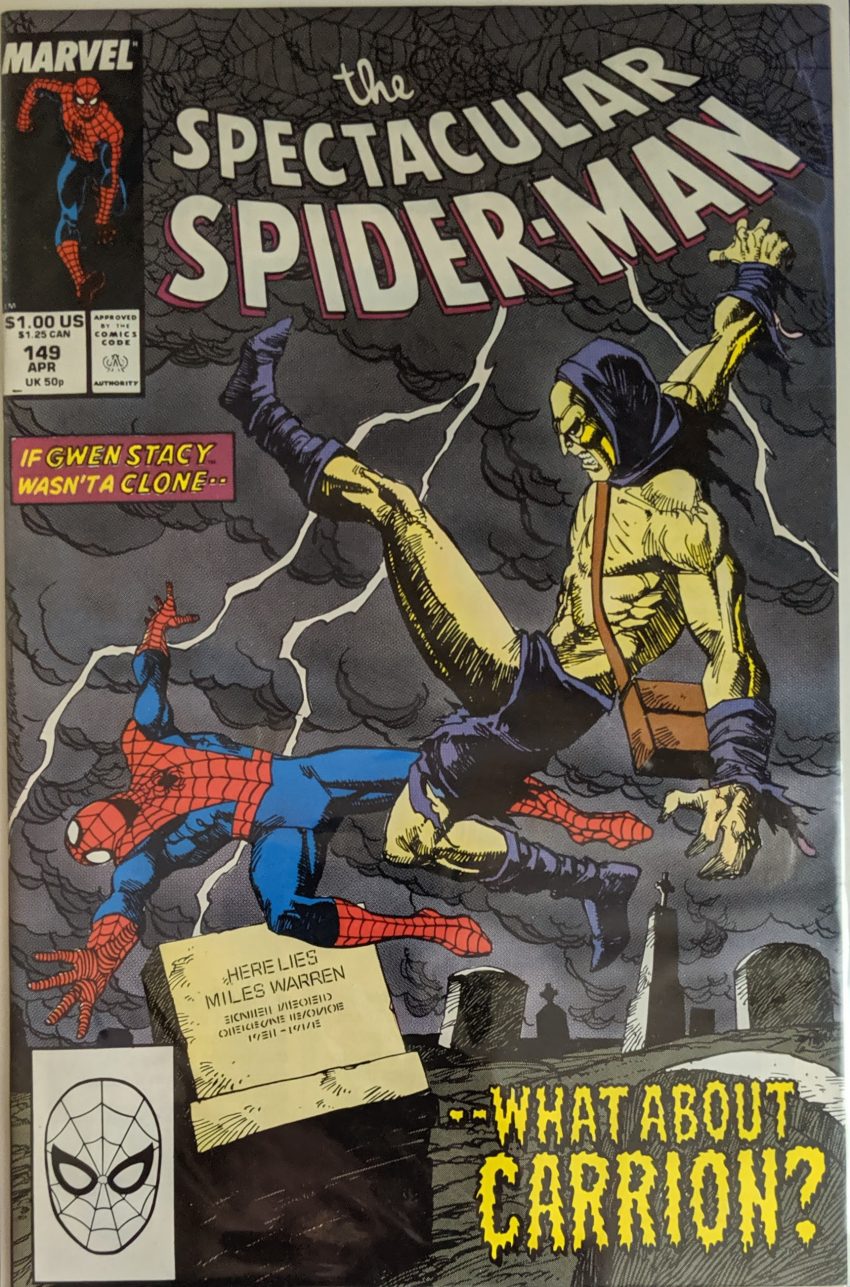 This is another one new to me. No concrete dates for Miles Warren. Probably for the best. This one starts off by revealing a not terribly secret secret.

Yes, The Lobo Brothers, who constantly make wolf puns and who have been depicted as very hairy with some pretty impressive fangs, are werewolves. Shocking! Werewolf mobsters is a kinda fun idea, though. The next day, Peter Parker is sitting in class, off in his own world, thinking about the things he learned from The High Evolutionary about Miles Warren. He thinks it makes sense that his bio professor couldn’t make full adult clones of people from a few cells (Mm hm), but now he’s wondering what Carrion was, like it sez on the cover. Odd that he’s not thinking about, you know, the clone of himself that he beat up and tossed down a smokestack. What if that was some innocent dude?

Oh, hey, Malcolm McBride. We know him from Block 9. I never knew how Malcolm became the 2nd Carrion, but I guess we’re about to see. Peter tells his labmates he’s working on an “independent study” today, then goes down to Miles Warren’s long-closed lab in the basement. A figure follows him, but doesn’t set off his Spidey Sense, for some reason. Then his Spidey Sense leads him to a book hidden in the floor, for some reason. You are 0/2 on the Spider Sense on page 6 alone, Conway.

“Lemme just drink this real quick!” And once again, no Spider Sense. Sheesh. Now, we’ve seen Peter find that same journal in Aunt May’s attic back in Block 9. But I assume it’s going to tell us how Warren made no clones here, only to tell us how he made clones in the 90s. What a mess.  Meanwhile, Joe Robertson is on trial for not ratting out Tombstone years ago, and Tombstone has been called as a witness. He claims he would never hurt Robbie, because they’re friends, and the prosecutor seems to buy this completely. Joy Mercado leaves the courtroom in anguish, sad to be reporting on the trial of a beloved colleague.

The Robbie situation is really too much for me. So the Feds are so eager to put him away for not actually doing anything 20 years ago that they’d reduce Tombstone’s sentence for multiple homicides to get him?? This is ridiculous! Also ridiculous: Glory’s whirlwind romance with Eduardo. Maybe he’s got Dracula-style mind control, I dunno, this whole thing feels weird. My personal experience with The Lobo Brothers story was spotty as a youth, I’m seeing a lot of this for the first time. Whatever, later that night, Malcolm McBride is examining his vial of goo, saying it’s a virus that multiplies at a shocking rate. But as he ponders claiming it as his own to get rich, it forms a tendril (Colored just like the muck monster from back in TAC 31, which is a nice touch) and reaches up to slap him in the face. That’s whatcha get, Malcolm. As he begins his grim transformation, we look in on Peter, home at Aunt May’s and reading Warren’s journal. Time for a serious retcon…

I don’t know how easy that text is to read, but Warren says he fell in love with Gwen the second he saw her, and once she died, he hated Peter Parker for having her love, so he followed him around intending to kill him. When he saw him change into Spider-Man, he began to formulate a far more ridiculous revenge. The woman who got turned into Gwen Stacy finally gets a name, Joyce Delany, as we’re told Warren’s assistant, Anthony Serba, was made into the other Spider-Man. This was all accomplished with a virus that overwrites someone’s DNA with someone else’s. Friends… how is this more reasonable or realistic than cloning? And why does Gerry Conway not care about Peter’s Spider Sense, like, at all? How could Warren possibly have watched him change like that without setting off an alarm? Seriously, this is terrible. He should have left well enough alone. Ugh. Spider-Man swings over to ESU to look for more clues, and runs into, guess who, Carrion. Who seems surprised that Spidey knows his name, and then surprised again when Spidey knows to avoid his death touch.

Good thing he had his good ol’ Spider Sense to warn him to avoid that dust… wait, that’s not what happened? I throw up my hands. Also, that dust which is supposed to kill people but sometimes doesn’t when the plot demands it sure must be hard to use. Spidey wakes up on Gwen’s grave, Carrion demanding to know how he knows about “The Replicator Virus.”

Again, this is supposed to be more plausible than cloning? Some random no name biology professor had the juice to make a virus that can turn you into other people and/or imbue you with superpowers? Sheesh. They fight around the graveyard, with it becoming apparent that Carrion believes Warren is still alive, waiting for him to report that he’s killed Spider-Man, so Spidey tries to move their fight to Warren’s grave (Oh sure, why wouldn’t they be in the same graveyard, New York is so small, after all), and eventually gets batted right into it.

Spidey gives a big speech about how Warren recanted his evil in the end while whupping on Carrion before punching him through Warren’s tombstone.

Uuuuuhhhh… ok! Also, The Vault, supermax prison for supervillains, is in Colorado, so that’ll be quite a trip! Man, this issue was 100% unnecessary. Conway just couldn’t leave the clone stuff alone. And then they came along and re-retconned all this stuff just a few years later. “Hey, it’s this.” “Hey, it’s not actually this.” “Forget what he said the 2nd time, he was right the first time.” At least we’re “done” with clones and Warren and such for this period.