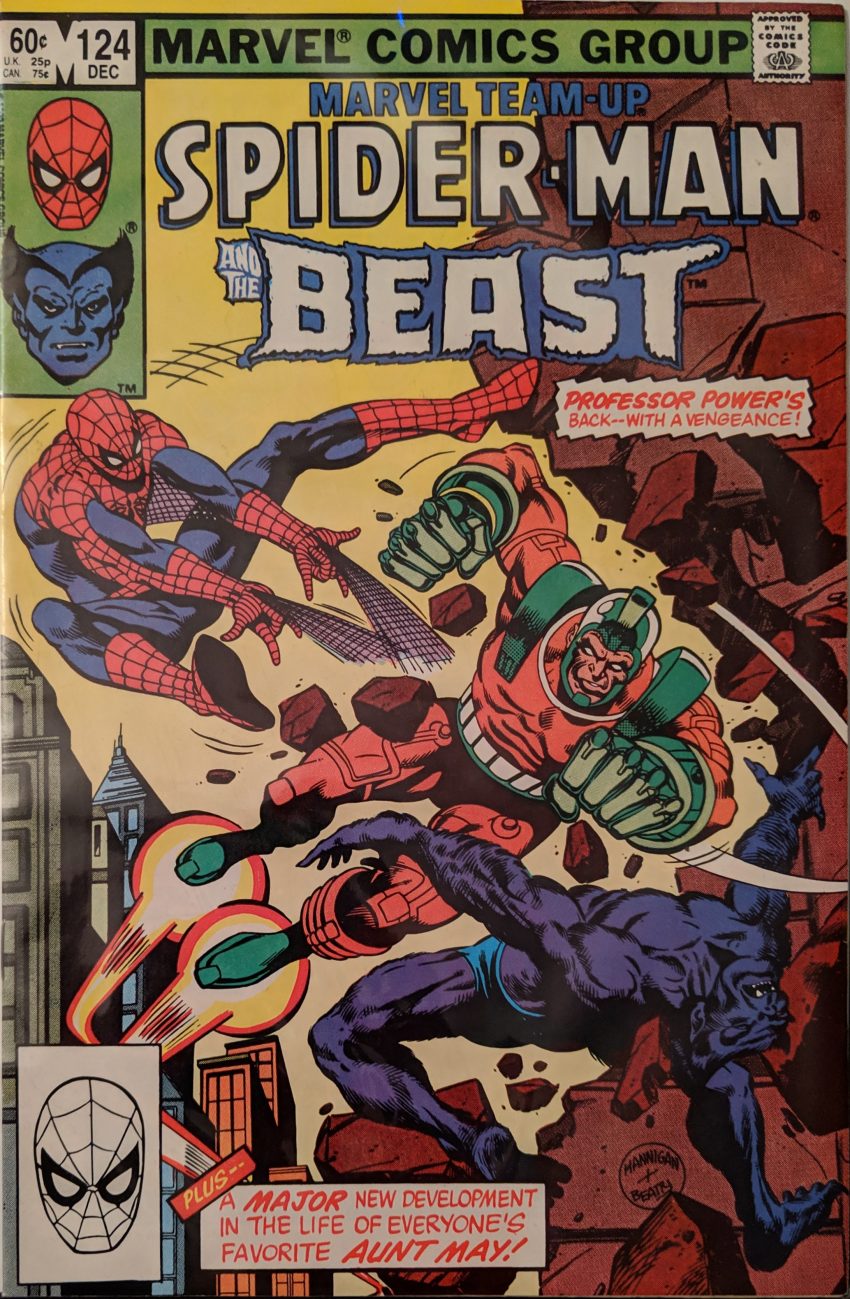 He is, is he? I’m not sure I’m excited after last time [link]. Which we get right into, as this is a sequel to MTU 118. Having moved his dumb castle to The Smokey Mountains, Professor Power is currently undergoing a crazy superscience process. He flashes back to MTU 118, and how Professor X ruined his life by not being magic (A caption calls this a “jaundiced account of MTU 118.” This same phrase was used to describe Fate’s recollection of his fight with The Defenders a couple issues ago. This is a weird thing), but his new gig is, he had his superscientists turn his comatose son’s body into some kind of living weapon, and now he’s having his mind transferred to his son’s body. That’s love.  A big flash of light prompts a guy to say no one could survive it, and then…

“He will pay for not helping my son, who I have now turned into a vehicle! Who’s crazy, I’m not crazy!” 3 days later, the bouncin’ blue-furred Beast and his girlfriend Vera are at Kennedy Airport to pick up Beast’s parents. He hasn’t seen them since he was a teen in The X-Men, and he’s not sure what they’ll think of him. His dad seems pretty alright. His mom…

Ouch. Meanwhile, in Queens, a momentous occasion is happening, as Peter Parker and some of his friends are helping Aunt May and some of her friends move back into his childhood home. As she’s discussed previously, she’s opening it as a boarding house, and a lot of people from the Restwell Nursing Home are her first tenants. Let’s meet them, since they’re gonna be in the Spidey books for many years (And have already appeared in this blog, of course):

Nathan Lubinsky’s moving in too, of course, and that rounds out the cast of the house. With the moving done, Nathan wants to know what’s up for dinner, and Arthur suggests they get take out from an Indian place in Rockefeller Center (I’m not a New Yorker, but that seems unnecessarily far away), and guess who’s eating at that same restaurant right now?

Good grief, Edna. She storms off, calling poor Hank “a horror.” His dad explains that she always tried to ignore that he was different, but now that he’s a world-famous Avengers with blue fur and fangs, she’s freaked out. Hank is remarkably understanding, and bounds off to try to get her to talk to him, but unfortunately, that’s when Professor Power shows up and zaps him.

In spite of looking like a reject from a line of 80s action figures that didn’t take off, Professor Power lives up to his name, giving Hank a rough time and eventually throwing him into traffic, right past the car Peter, Arthur, Peter’s lab partner Roger Hochberg, and I guess his girlfriend, who I don’t know and isn’t named. Peter leaps out saying he’s gonna go get photos, and switches into his Spidey gear. Roger’s girlfriend notes Peter is a man of action, and she likes that, because all women everywhere are attracted to “regular everyman” Peter Parker. He accidentally leaves his camera webbed up with his clothes, but it’s too late to worry about that, because Professor Power is about to zap the stunned Beast.

Spidey recognizes that this is Matthew Power’s body being controlled by his dad, and rightly shames him for it, but Power is way past reasonable. Spidey gets him in a chokehold, but Power grabs his wrists and throws him off, crushing his webshooters in the process.

Same month as Stern makes it a point to have Spidey keep his Spider Sense a secret. As the battle continues, we cut to Hank’s Mom upstairs in her hotel room, being mopey about losing her son, when the commotion outside brings her to the window to see him in action. A little kid runs into the battle, and Hank tosses him to Spidey at great personal cost, leaving himself open to a big zap. His Mom sees this and seems upset. Spidey tries to web Power up, but…

This would be the part in a later DeMatteis story where he’d want to kill Hank for maximum pathos, but naturally, he’ll be fine this time. As Mrs. McCoy rushes down to the street, Power goes to a nearby construction site and brings back a whole giant excavator to smash her son with, but then she runs out and gets between them.

Enda distracts Power long enough for Spidey to get his bearings and web him into the ground, the big machinery crashing down on top of him. Hank and his Mom are reunited.

Well, this was a weird one. It’s always nice to see this kind of story with one of the mutants. Maybe predictable, but I enjoy a hopeful ending at least as much as the next guy. Come back next time for a move to Spectacular, as we reach a climactic moment for a member of the cast.