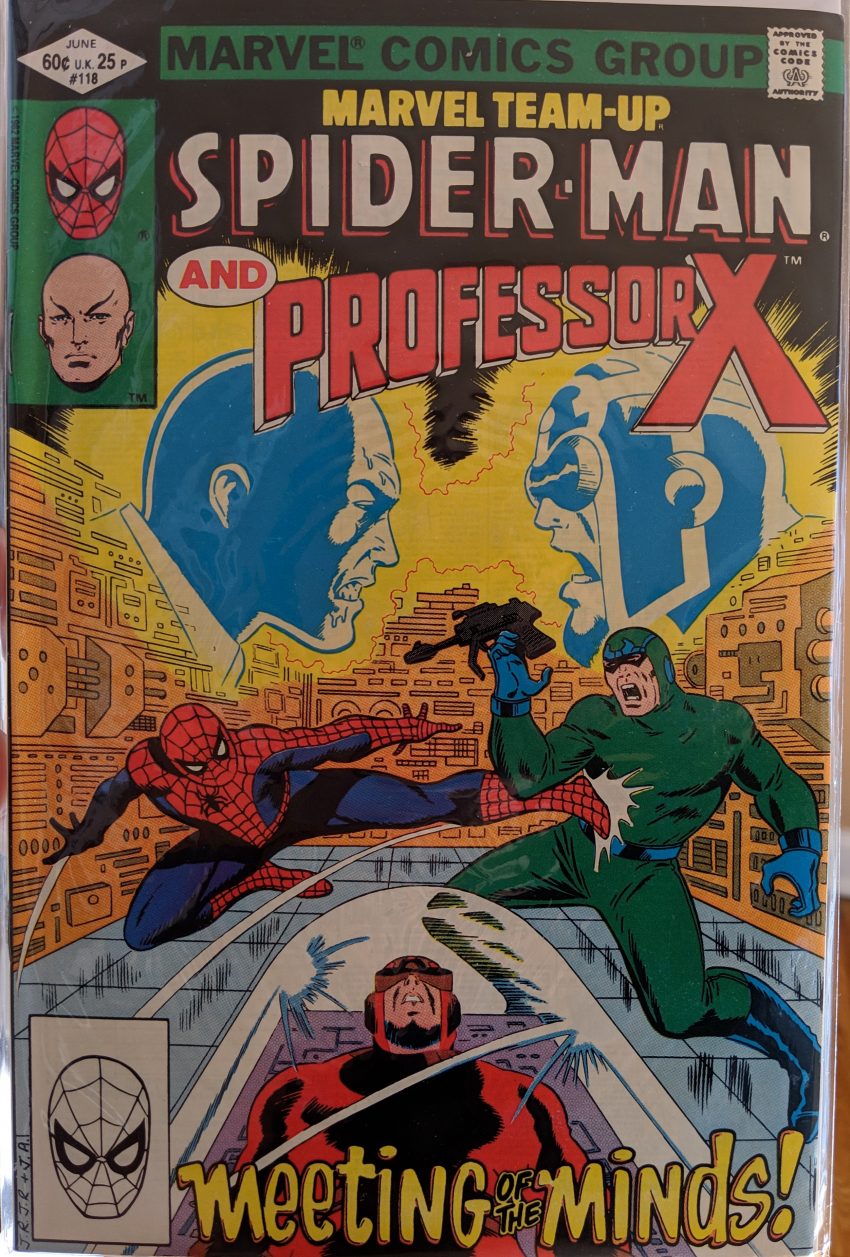 To my surprise, this is a direct continuation of last issue. Usually when a MTU plot is continued, they just kinda have Spidey bump into somebody else on the same case or something, but this one get started with Wolverine having asked Spider-Man to return to Xavier’s Mansion with him after the whole business last issue, and the 2 of them in The Danger Room. And Spider-Man is not enjoying it.

Suddenly, the room shuts down. Wolverine is characteristically more angry about that than is warranted, but Spidey is relieved. Professor X has shut down the training program after sensing how tired Spider-Man is, and reprimands Logan for doing this to him. Wolverine is all Wolverine about it.

This issue is well into the “All-New, All-Different” era, post-John Byrne, post-Dark Phoenix. This conversation feels more like it would’ve happened back in the early days of this version of the team. Anyway, Spidey joins the X-Men for breakfast, where Kitty Pryde totally fangirls out on him. She says she’s been following his adventures “almost since she was born,” which throws the whole sliding time scale that keeps these characters young forever way out of whack, but what can ya do? Then Professor X says he’s off to Scarsdale for a meeting with none other than Professor Power, “noted historian and expert on foreign affairs,” and also last issue’s villain.

That world famous Charles Xavier charm! Spidey realizes this is actually his best chance to get back to Manhattan, and quietly hitches a ride on the roof, where he soon falls asleep, still sticking to the car. Xavier notices him, and spends the trip hiding him from passing drivers’ minds to avoid a scene. He also thinks something’s fishy about his driver, and probes his mind…

Timely reference! Spidey doesn’t see anything wrong, and then the buzzing stops, so he decides to take off… but then it cranks back up, and he decides to follow Professor X’s car as it drives into Powers’ private estate. Soon, Xavier is wheeled in to meet the man himself.

Spidey lets us know Power has been an advisor to presidents and done all sorts of stuff, and can’t imagine anything bad going down would be more than Xavier could handle, anyway, but can’t shake the feeling there’s trouble, so he decides to do some light breaking & entering just to be on the safe side. Meanwhile, Power is ranting at Xavier about how the world will only know peace when everyone has been made to see things the same way by telepaths like himself. Power knows all about The X-Men, he says, and then he has his driver wheel Professor X into another room. Xavier is freaking out because all of this was shielded from his mental scans. At the same time, Spider-Man is discovered skulking around by those Roman guys from last issue, and they soon descend on him.

While Spider-Man works on the goons, Power shows Xavier why he’s here: Power’s son. He came back from Vietnam a vegetable, and Power wants Chuck to fix him. In spite of everything else, Charles actually tries, but finds the son’s condition is too delicate to be forced. Power yells that that’s just what the doctors said, that Charles could help but is refusing to, and so he lowers a “psycho-plastic cage” over the Professor, which looks like a big fish bowl. It’s part of a network of devices that both block Xavier’s powers and project a screen of happy thoughts. And that’s not all:

Power says once Mentallo is revived by Chuck’s psychic energy, he’ll fix his son, and then they’ll use his power to manipulate The Soviets and save the world. Charles has already been testing his mental prison, though, and manages to get a mental blast out to Power trying to stop him from engaging the machine. It’s not enough, though, and soon Charles is in terrible pain as the machine powers on.

The Fixer being involved gives at least a little explanation for all this anti-psychic technology, but only a little. I’ve always thought this was another slippery slope, like messing with Spidey’s danger sense. But, you know. Magneto’s had a telepathy-proof helmet for so long, you might as well play with the toys available. So, Spider-Man gets into a physical battle with The Fixer and his various gadgets, while Xavier is in a mental one with Mentallo, whose abilities are being amped up by the machine. Why, it’s like on the cover!

Spidey breaks out of the imitation webbing as Professor X turns his psychic form into a big monster to beat up Mentallo, but he’s losing his power by the second, and Mentallo is wailing on him. Spidey finally puts down The Fixer, and Professor X uses the last of his strength to form a “psychic spear” that messes up Mentallo so bad he passes out in the physical world. It’s looking like the day is saved. Then Power’s son starts screaming the word “no.”

Right about then, some cops burst in (Uh, why?), but Xavier makes them see a bunch of dudes having a nice dinner, so they leave. Aaaaaand that’s it! What will happen to Power? Are his schemes over now? What about Mentallo & The Fixer? We may never know.