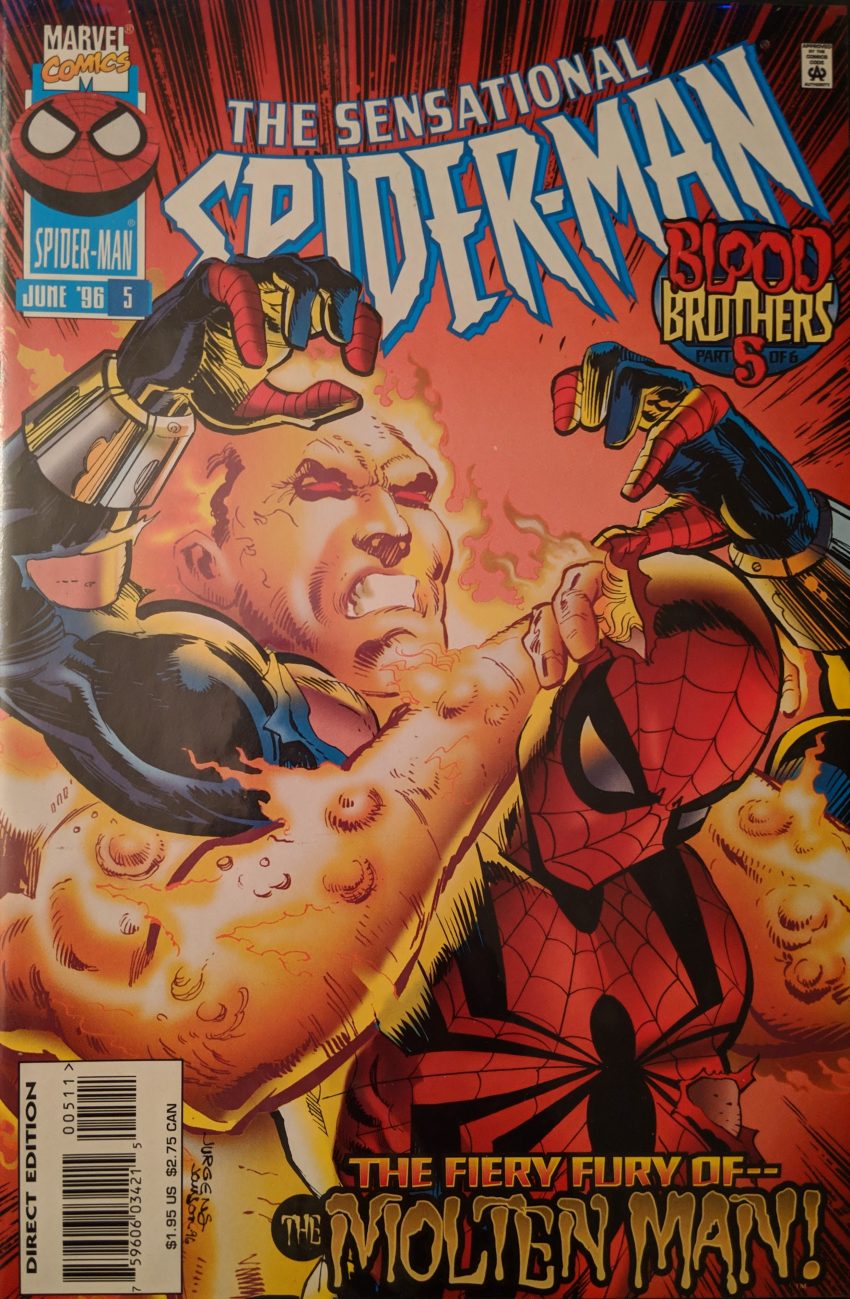 Part 5 of this story gets underway with Spidey swinging around recapping, as he is wont to do, before diving into a mugging to vent his frustrations. Also his suit is magically all fixed up. He beats up the assailants, maybe a little too much, as the victim tells him he doesn’t have to kill them.

Zoinks! He sure was lucky that lady got mugged! So, now he knows what we know, and he swings away without saying a word to go tell Peter… who is on a nearby roof, dressed in all black with binoculars. It was apparently his idea to follow this lady. Peter wonders why Osborn Industries would be after him, and Ben wants to know what’s happened between him and them in the 5 years he was gone. I’ve been dancing around this, but I guess I’ll let Peter tell him, and you, a bit about the status quo:

Harry & Liz had their kid, Harry’s dead, a lot has happened since ASM 261, as you would expect. Peter talks about their shared history as Spider-Man like Ben wouldn’t know it, which is dumb. Peter mentions that Liz moved away from New York, but comes back to check on the business from time to time, and he knows what hotel she & Harry have always liked, so he’s going to go see her. Meanwhile, The aforementioned Molten Man breaks into Multivex, in spite of the fact that he’s technically the boss there and you wouldn’t think he’d have to.

Peter goes to see Liz, who says she hasn’t seen her brother in months and Osborn isn’t doing anything wrong, but when he reports back to Ben, he mentions he saw an “asbestos-lined coat” hanging over a chair (alright), which only The Molten Man could wear (Funny to think back on the hundreds of asbestos references in 60s comics now), so something’s up. They decide to… go check out Multivex. Didn’t they JUST do that? While they run around in circles, Shirley talks to her insurance adjustor, who says the company will cover her burned down coffee shop. A bunch of her regulars have organized a show of support outside, including Jessica & Desiree Winthrop, who thinks the angle that Ben did it seems reasonable since he didn’t show up (Not the strongest evidence, but ok).

Over at Multivex, Ben looks in a random window and there’s Molten Man at that computer (Which was in a heavily secured room that probably shouldn’t have windows???) and assumes he’s their enemy, smashing through the glass over Peter’s objections.

As they fight, somewhere below them in the building, an extremely off-model Seward Trainer sees it on security cameras, and tells his mysterious boss they’ll have to cancel the procedure. But Gaunt, hooked to a bunch of machines, says he can’t stand being locked in his “life-sustaining suit” another moment, so they have to keep going. Spidey and Molten Man are still fighting as Peter Parker stupidly shimmies down the side of the building to “see what I can do to help!” This is getting ridiculous. “I have no superpowers, no formal training in anything, and I’m used to relying on super strength and a danger sense I don’t have anymore, so I should definitely keep getting into fights.”

Trainer gained like 40 pounds since last issue and then lost it by this panel!

Looks like trouble. Will the mystery man be revealed next issue? Will it even matter? Only one way to find out.