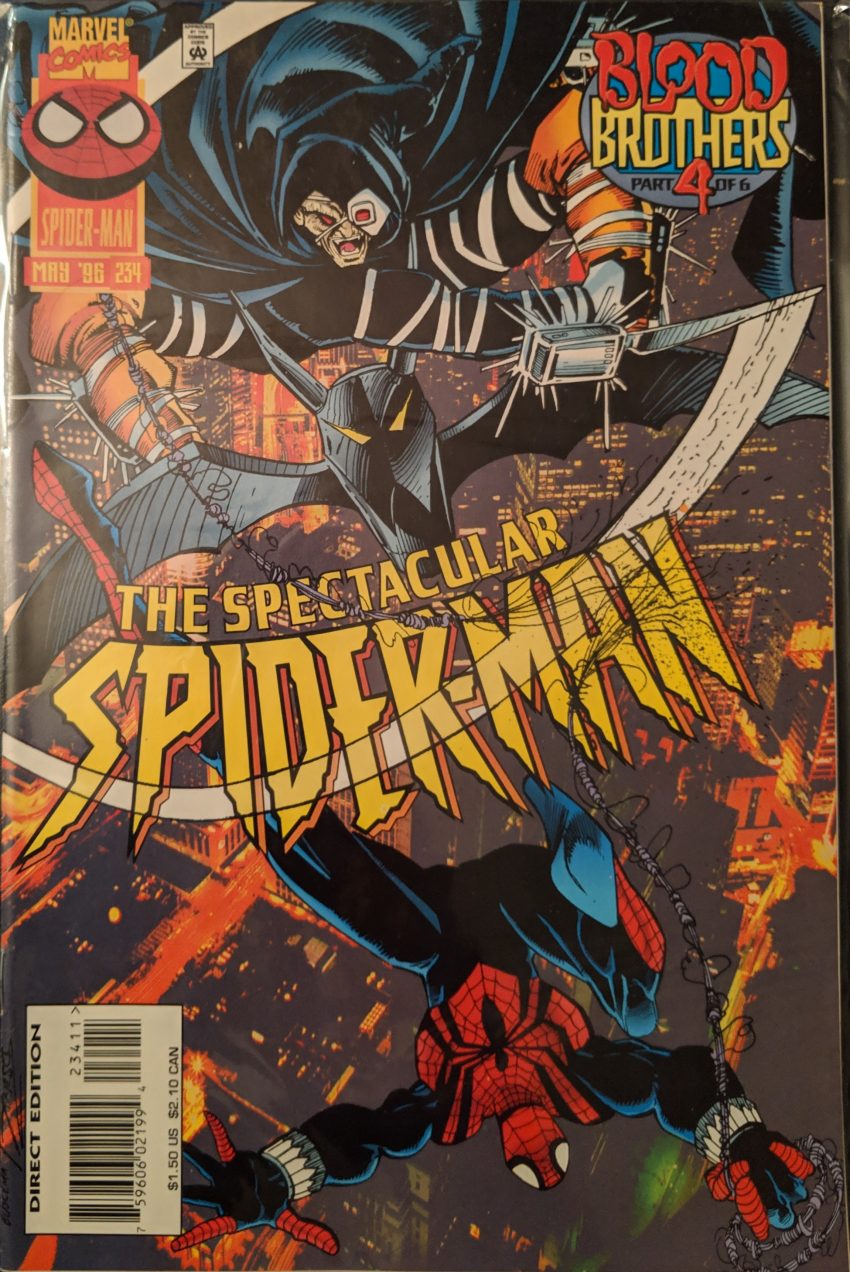 This is weird, because JRJR clearly did this redesign of his character, and he clearly had him flying without a glider last issue, but from here on out, he’s on a glider like old times. This month, Sal Buscema provides breakdowns for John Stanisci to finish, and he is… not ready, frankly. MJ & Peter take care of the badly beaten Ben as he recaps what’s been going on with him. When he gets to discovering Trainer is not his friend, we switch to him, confronting the still-unnamed (Except I said his name last post) villain behind him and Hobgoblin.

Ya know I think you can tell Sal is drawing the man who was supposed to be Gaunt in that close up. Only problem is, Gaunt’s true identity will be changed before he’s revealed. What a mess. Gaunt asks Hobgoblin if Spider-Man showed up when Peter Parker was attacked, and a confused Hobby asks if he expected him to, but Gaunt says “not at all.”

MJ’s breasts on this page are absurd. Peter tries to get Ben to go with him to find Trainer, but he says he can’t and swings away to Jessica’s place.

Sal with the 60s romance comic style panel there. Wildly inconsistent art, colors included. Great job, Ben, you dunce. Meanwhile, Liz Osborn is looking over the books at Osborn Industries, and is troubled to see a ton of money has recently been funneled to a small subsidiary called Multivex! Oh ho! Ben returns to the hotel, but MJ says Peter has already gone to Multivex looking for Trainer. Cut to Peter picking a regular ol’ household door lock to enter a clearly very advanced scientific facility…

Yeah, it’s these idiots again, and they’ve never looked worse. Ben shows up to save the day, of course. I literally don’t know what happens on this page…

…then Hobgoblin shows up. Spidey tells Peter to go for Trainer while he takes care of the villain. Spidey internal monologues about how amazing Peter is to do all this with no powers, and how selfish it makes him feel. Hobby flies out a window and Spider-Man gives chase, while Peter sees Trainer and chases him up some stairs, leading both sets of foes to end up on the roof. Spidey tackles Hobby off his glider as Peter catches up to Trainer.

Peter’s just a guy now, though, so he falls off the glider, and Spidey has to go save him, allowing Hobgoblin and Trainer to both escape. The “brothers” compare notes afterward, concluding someone is behind Hobgoblin, but not knowing who it could be. To Be Continued. This one didn’t get the plot much further down the road. Feels like this didn’t need to be a 6-part story.