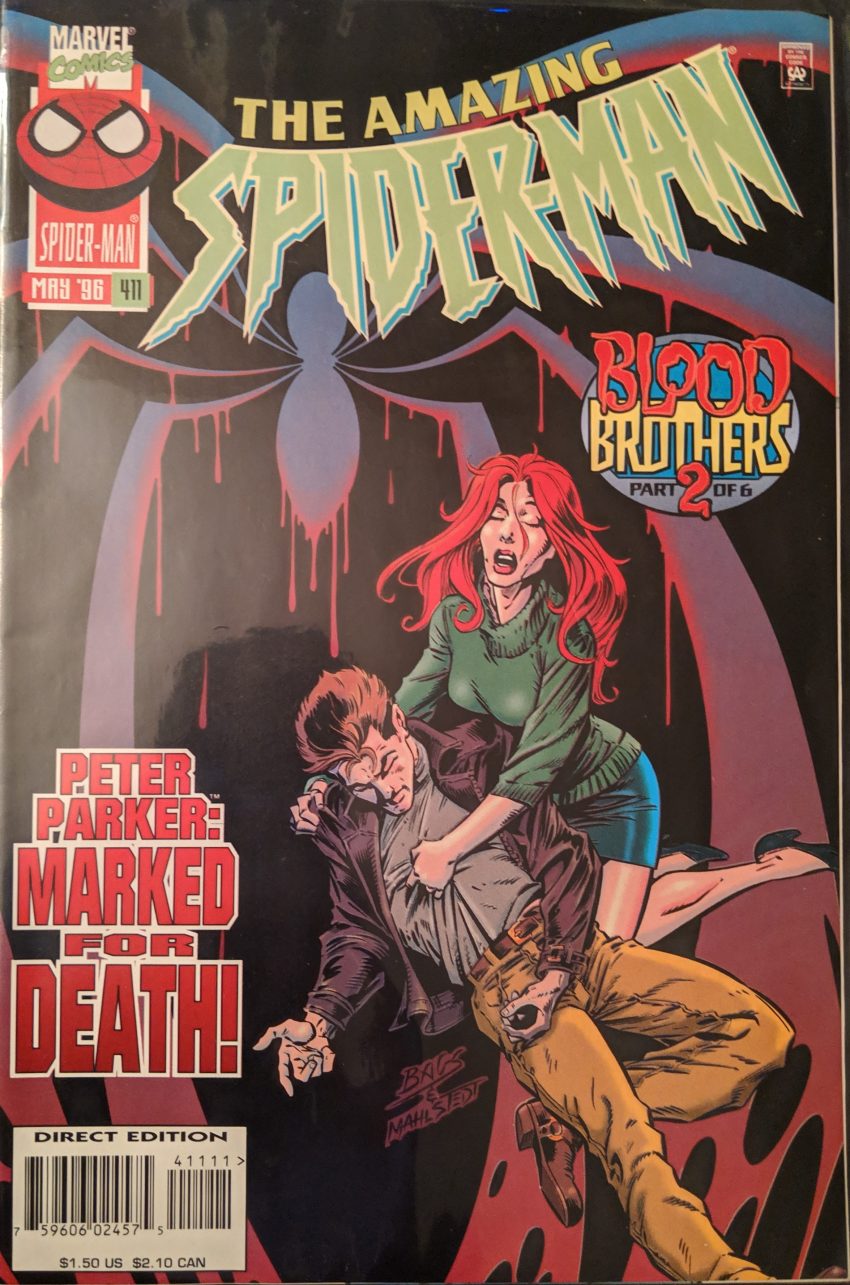 That definitely looks like things get worse! Al Milgrom pitches in on part of this issue’s inks, and I’d wager that includes this page, as JJJ is throwing a party because of Spider-Man stealing that skeleton.

Well, at least they’re addressing my concerns about JJJ’s scheme to some degree. Elsewhere, Spider-Man is swinging around recapping last issue, like he does. He also lets us know he went to Seward Trainer’s lab this morning only to find it abandoned. So Trainer is missing and his stuff’s missing, too. Seems like trouble. He decides to go home and relax, but the TV Jessica got him makes that hard to do, so he leaves, noting it’s oddly cold in his apartment.

Look, it’s the beloved landlady character who’s only appeared once before! Aren’t you excited about Ben’s great supporting cast? His social security number’s invalid and his rent check bounced right as his only friend disappears. If you were one of the worst ideas in comics history and all this happened to you, I bet you’d be worried about your future! Across town, Peter & MJ argue about their own future. MJ wants to go back to Portland as soon as possible, but Peter wants to stay and get to the bottom of the skeleton business. MJ says with no powers, his only responsibility now is to her and their unborn child. She’s not wrong! He’s obviously conflicted.

I vaguely remember this guy. He’s called Gaunt, I think, which seems appropriate. Elsewhere, Ben goes to a bank and finds out his assets have been frozen by the IRS because he’s not (legally) a real person (but also literally). He rolls in to work to ask for an advance on his check only to see a couple of tough guys asking Shirley questions. He goes in the back to hang his coat, realizing he still has Jessica’s bag in his locker, and then comes back out front.

But as the happy couple walks on, a very 90s looking shadowy figure tells someone on a radio to intercept them on his signal! At the coffee shop, Ben is worrying about his situation when Jessica comes in for her bag. They agree they have a lot to talk about. Then, after a moment of silence, she just leaves.

Good grief. That’s no way to treat a pregnant lady, you extremely silly looking weirdos! Why would anyone get a snake tail grafted onto their body?! What’s the science of that, “Bramer?” What kind of supervillain names are these, anyway? Whew! As Peter tries to get MJ to safety, the goons say she is not to be harmed “at this time,” but Peter is fair game. A whip of Bramer’s asinine snake tail sends Peter flying into the big one whose name I already forgot, and without his powers, that messes him up pretty bad. These guys are here to kill him for looking into Trainer’s disappearance, and clearly expected Spider-Man instead of a regular dude. Meanwhile, Spider-Man stops Bruce Wayne from becoming Batman. Seriously.

That kid is clearly wearing a Batman t-shirt on the next page! Pretty funny. He swings home thinking he’s not been acting like a hero (Has he not?), been too focused on his personal problems (Has he?), and wanting to change his ways (Really?), when he finds his apartment has been completely emptied out and someone has written “WE KNOW WHO YOU ARE!!” on the floor in red. With a mouse, clearly.

Ah, the early days of digital. Hey, wasn’t Peter Parker getting beaten to death? Poor MJ is forced to watch as the snake one (who I thought was Bramer but is not) slaps Peter repeatedly with his big metal hand.

Gross. Meanwhile, Ben realizes whoever’s cleaned him out would have to know about his job, and swings over there as fast as he can, worrying Jessica could be behind this, only to find it on fire! And that’s To Be Continued! Things sure did get grim quickly here. Next issue’s cover will make it clear things are only going to get worse.