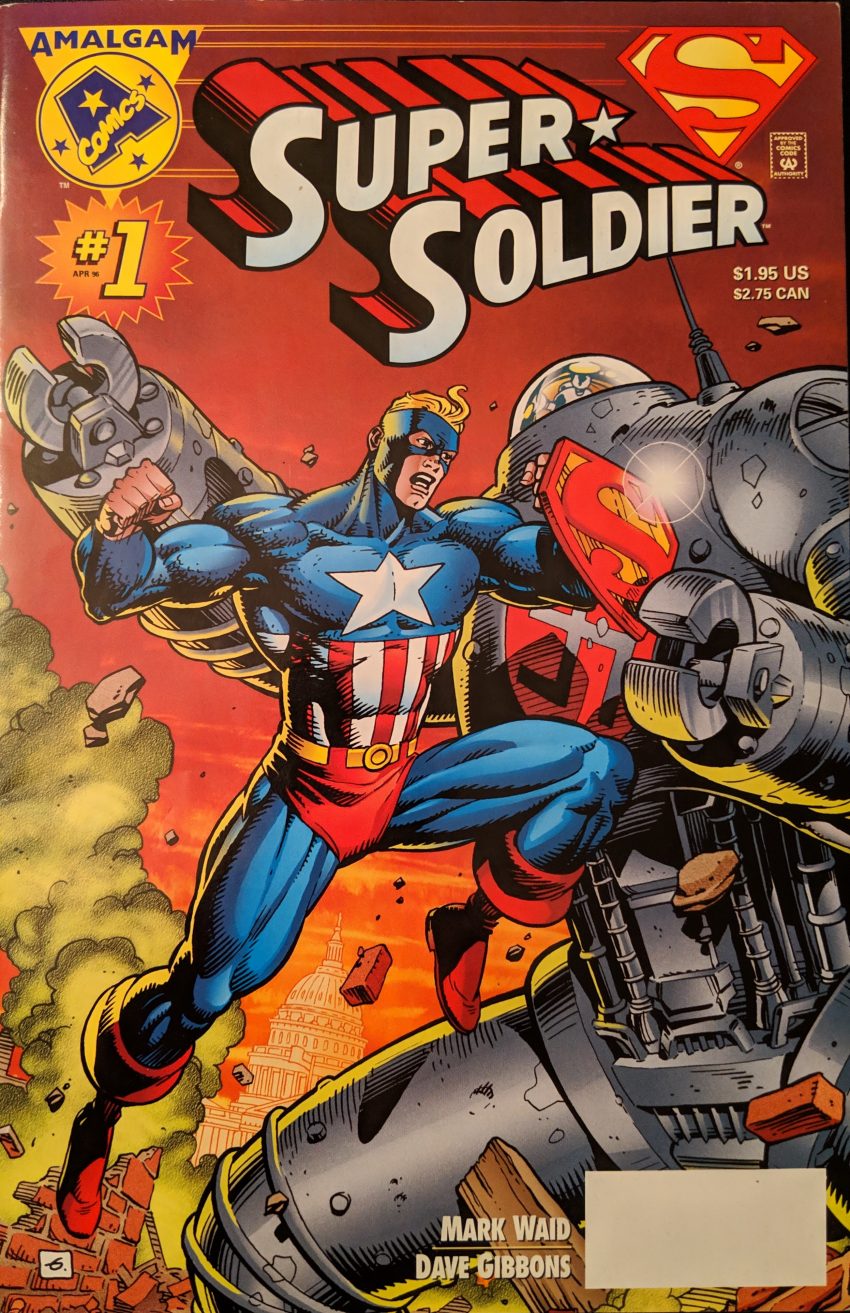 You know, you can say this crossover is a stunt, a gimmick, a giant cash grab, but let’s be honest, this is a once-in-a-lifetime chance to do some wacky stuff, and they really grabbed it with both hands. In between issues 3 and 4 of the event, Marvel & DC unleashed a big pile of Amalgam comics by all kinds of cool talent from both houses, showing you what the merged universe is like through a series of “New #1s” as if The Amalgam Universe has been going the whole time instead of Marvel & DC. They even have fake letters from fans in the back, excited that their favorite heroes are getting new series and commenting on past issues that don’t exist. Is it an obvious attempt to get you to buy a ton of one-shots? Sure. Is it actually pretty fun? Also sure!

They run a wild gamut. There’s relatively straight forward stuff like Super-Soldier, a blonde Superman who became America’s super soldier in World War II, and X-Patrol, mashing up the already very similar X-Men and Doom Patrol. There’s slightly wilder fare like “Dark Claw,” a Batman/Wolverine mashup. But then there’s much more out there stuff, like “Bruce Wayne: Agent of SHIELD” and “Bullets and Bracelets,” starring Trevor Castle (Steve Trevor/Punisher) and a depowered Diana Prince (Because Storm is Wonder Woman in “Amazon”).

And the talent! In addition to a lot of Marvel & DC’s current crop of talent teaming up, sometimes in reliable combos, sometimes in new and surprising teams, you get the great Dave Gibbons drawing Super-Soldier, and the GOAT of DC Comics, Jose Louis Garcia-Lopez on “Dr. Strangefate,” the hilariously awkward combo of Dr. Strange and Dr. Fate.

And there’s more surprising signs of the times in there, too. For example, The Justice League are merged not with the low selling, minor title Avengers, but with much more popular The X-Men in “JLX.” Certainly not how it would go right now. Iron Man, Thor and Hulk don’t even rate a book (Yet). And that, unfortunately, brings us… to Spider-Boy.

The Challengers of the Fantastic (The FF and the very similar, earlier Kirby concept Challengers of the Unknown) work there, and he beats Bizarnage (It hurts me to type it) with the help of, no kidding, Johnny Stormtrooper. The mashups and references come too fast and furious for me to even talk about them all as everyone sorts out the aftermath of the fight. They recap how Spider-Boy was an attempt to recreate “The Super-Soldier Project,” since Superboy at this time is a clone of Superman, but things went wrong, the scientist Peter Parker died in an explosion, and Spider-Boy came out an imperfect clone. General “Thunderbolt” Ross, last living witness to the original Super-Soldier project, took him under his wing and told him Super-Soldier’s parents always used to tell him “With great power comes great responsibility,” but when “Uncle Gen” was killed by a burglar, Spider-Boy avenged him, and there ya go. In the present, Spider-Boy is a celebrity, and trying to get a lead on the escaped King Lizard (Killer Croc/Lizard), and goes to The Daily Bugle in his disguise as Pete Ross.

It’s like every sentence in the book is winking at you. He builds a machine that shrinks King Lizard into the sub-atomic universe. When he gets back to Project Cadmus, he gets introduced to Mary Jane Watson…

Wacky stuff from start to finish. So there was all this fun stuff, and then it was time to wrap things up.

As Dark Claw and Super-Soldier fight The Hyena (Joker/Sabertooth), the old guardian with the cardboard box is dying. He’s felt the truth. The brothers merging wasn’t actually their idea. Rather than let a universe die, The Spectre & The Living Tribunal are holding it all together against the wills of their bosses.

Access teleports out and sees this cosmic nonsense, then back to Earth, where the old guardian has drawn Dark Claw and Super-Soldier nearby so Access can get the “shards of the old universes” he put in them back. Then the old guardian gives Access the rest of his power, and now he’s the only one. He uses whatever he put in the heroes to help the cosmic dudes restore to the 2 universes to their overlapping state pre-Amalgam. In the chaos that follows, all sorts of new, random team-ups happen, like Superman & Hulk fighting The Mole Man and his Moloids trying to take over The Batcave. Access, Cap & Batman start trying to figure out what to do, as on the cosmic plane, the two enraged brothers start fighting. And at The Daily Planet…

I really don’t know why this is the only subplot in this story, but it is resolved. Elsewhere, all sorts of other team-ups are happening…

Thor gets knocked down and Wonder Woman hands him his hammer, shocking him, but then reality begins to collapse as the brothers keep fighting. Cap & Batman make Access take them to the realm the brothers inhabit to try to talk them out of this.

I would be remiss if I didn’t show this pitch perfect moment:

I hope Jim Starlin saw that. In the cosmic realm, the brothers’ fighting is way too big for Cap & Batman to stop, and in the process, their battle “rends their very cores asunder.” But as their lives flash before their eyes, the brothers see it as well, and they’re so impressed by what great dudes their universes contain that they stop fighting.

It had to end somehow! So the universes are restored, Access can travel between them, and everything’s back to normal. For the most part. Come back next time for one more post about all this.