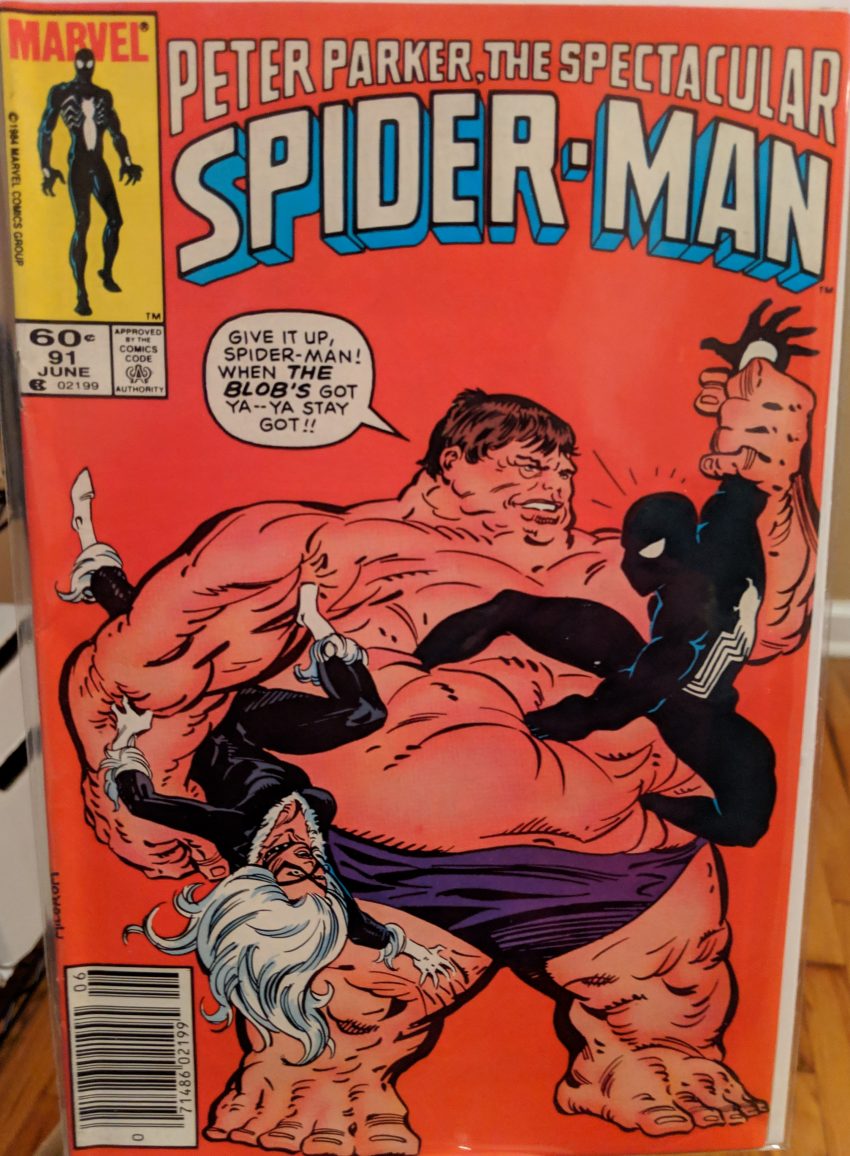 While I’ve known the Amazing Spider-Man alien costume story since I was a kid, I never saw the TAC or MTU issues of the period. I was excited to further flesh out the story with them. But I have been learning, to my dismay, that the story only gets more messed up if you add the other two monthly Spider-Man comics, especially TAC. Al Milgrom constantly references what’s happening in ASM while telling a story that doesn’t fit into ASM’s timeline. He gets started right away here by picking up not long after last issue left off, forcing this one to come before or after ASM 253. It may not seem like a very egregious problem, but things are going to snowball. Hell, Milgrom’s causing problems for himself, even. This one opens with Spider-Man chasing a Black Cat who doesn’t believe it’s really him in the new suit… but in Manhattan. Pretty far from Aunt May’s house. Then, after Spidey does some Spider-Man stuff like sticking to walls, and Cat worries that her still-secret new powers didn’t do anything to him, Milgrom backtracks to a lame explanation:

Like, what? She was literally running away telling him to leave her alone, but only after a long, silent train ride? Ooooooohkaaaaaaay. Spidey briefly recaps his absence. Then he announces that his experience on Battleworld has made him realize life is nothing but risks, so he can’t really stop her from risking her life with him…

WELL. Can’t help but recall the controversy over DC’s infamous splash page of Batman & Catwoman getting down in costume on a random rooftop when The New 52 started. We cut to tomorrow afternoon, where notorious X-Men villain The Blob is approaching a circus tent in Madison Square Garden. Inside, he finds Unus The Untouchable, another X-Men villain, who’s apparently lost all control of the force field that makes him untouchable. He’s stuck in mid-air in this circus tent, holding it up, and hasn’t been able to eat at all or breathe well for days. “Nothing can move The Blob,” so he starts pushing through the forcefield. But then…

That doesn’t sound like it’s going to be fun for our hero. Speaking of whom, as the sun begins to set, he finally wakes up. He figures he was exhausted from his experiences on Battleworld and his fun times with Felicia last night. He runs into his landlady, who yells at him about the rent, as usual, and also about his weird girlfriend sneaking out of his place the other night. Peter wonders how she could’ve let herself get caught as he heads to The Daily Bugle, where things get more awkward.

Black Cat really made a mess of his life last issue. Then he waits hours for Joe Robertson to get done finalizing tomorrow’s paper, and then Joe… sigh, then Joe tells him he has no jobs for him because he disappeared for a week, and that he’s “lucky he got that sports assignment the other day,” referring to ASM 253. How? It’s only possible if 90 happened after ASM 253. Robbie is pretty stern with him, telling him he’ll call if he has any jobs, IF he can reach him. Then Peter goes home and decides to call Aunt May, making a 2nd reference to ASM 253 on this same page as he says she’s mad that he quit school Nathan answers, and Aunt May refuses to come to the phone.

Flash is feeling bad about life, and wants someone to confide in. His girlfriend Sha Shan, hasn’t been paying him much attention lately. Peter tries to say she’s growing as a person since she started school, but the real problem is Flash is having trouble adjusting to the real world.

Well, that doesn’t make Flash feel any better. He decides he was right about Peter in high school and storms off. Meanwhile, a very frustrated Peter chastises Black Cat for being so obvious, but she says there’s an emergency.

Spidey leaps in, making a flurry of really crappy fat jokes, before getting his hands stuck in The Blob. That’s part of his thing, see, as goofy as that is. He can trap you in his fat. This whole character is pretty awkward, honestly. While they struggle, a mysterious figure watches from the shadows, studying Spider-Man so he can be better prepared to fight him if he survives. Then Black Cat gets tired of just watching.

Her bad luck power makes The Blob lose his balance and fall over, allowing her to escape. Then he charges Spider-Man, who dodges, and then Cat’s power hits him again, making him plow through a wall into a kitchen, where two absurdly large vats of hot soup fall on him. Not that that really hurts him, much.

First “black cat crosses your path” reference in a long time. I wasn’t missing them. Blob climbs up out of the hole in the ground, but now he’s just talking about Unus being dead and he fight’s gone out of him.

The Blob has just sat down in the middle of morning rush hour traffic in Times Square. Spidey notes that Felicia did better in that fight than he did, and apologizes for being overprotective. She debates telling him about her power, and chooses not to. Then Captain Jean DeWolff shows up to try to deal with the traffic jam, and our heroes take their leave. The end. I feel like you were supposed to feel sympathy for The Blob even as everyone in the story refused to, which is… a weird way to do business. Guy’s only friend dies and he gets nothing but grief from our hero.