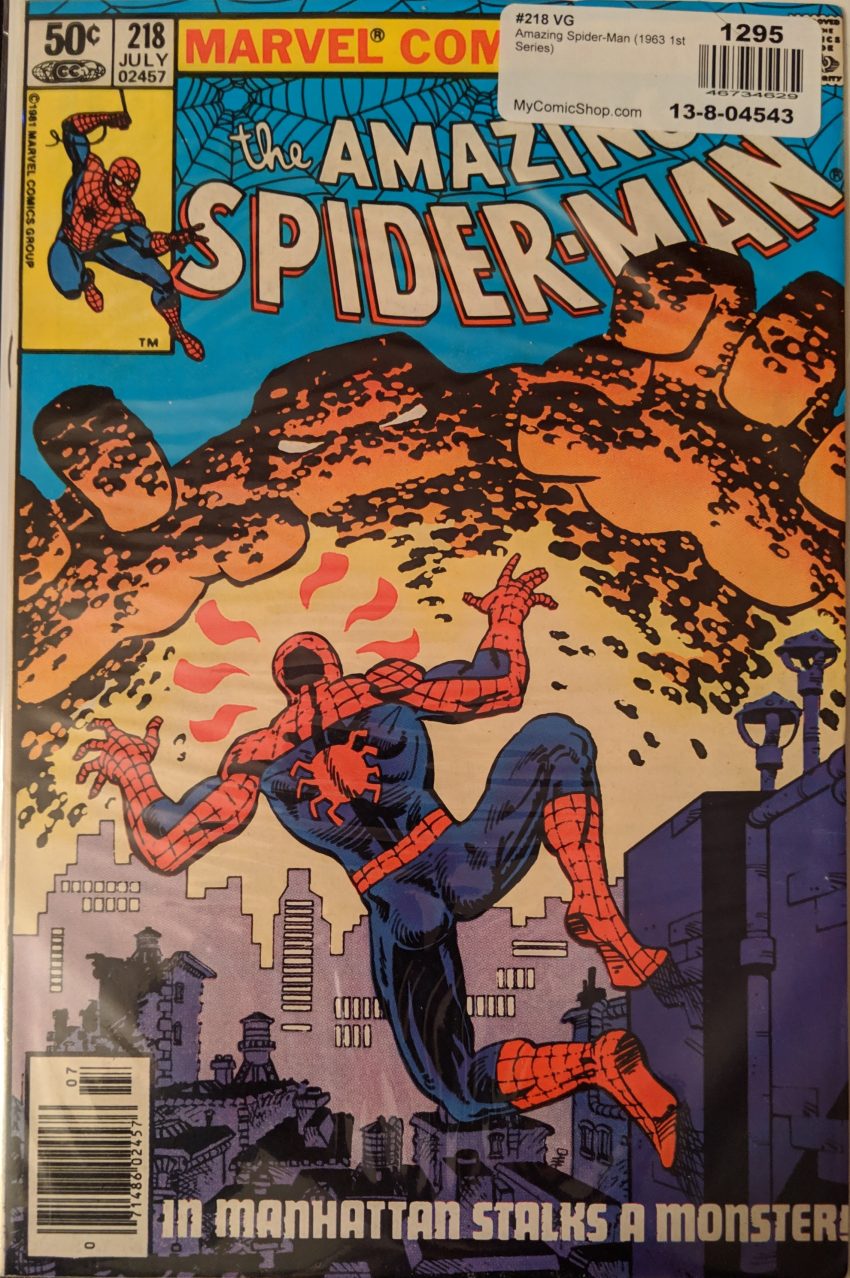 Here we go, big finish. As the rain continues to pour, the Mudman lurches around the docks, not seeming to care about Spider-Man. He’s pretty freaked out by the whole situation, actually. He decides he might as well profit from this and get his camera set up. Then he thinks maybe throwing a big crate and the monster will discourage it from attacking him.

I’ll say again, I may not be vibing too much with Denny O’Neil’s storylines, but I love his voice for Spider-Man. Spidey thinks the thing is growing larger, and decides he better put everything he’s got into his next attack, but the mudthing just bats him away, barely noticing, and Spidey is briefly knocked out. When he wakes up, he figures he might as well go sell the pictures of him getting beat up to The Bugle, but JJJ accuses him of faking the pictures. A man whose son is a werewolf doesn’t believe in the mud monster. Then Robbie runs in and says there’s a report of a monster on the police band, so Peter takes off. He goes to check in on Sadie, figuring both men in that monster were into her, and sure enough, they are at her place.

I, for one, am glad the mud monster still has pants on. We wouldn’t want to be indecent. Whose pants, though? I don’t think they’re the right color for either Sandman or Hydroman. I am probably focusing on the wrong thing. The mud thing carries Sadie outside, and she convinces the cops not to shoot at it. Spider-Man just snaps some more pictures, daring JJJ to say these are fakes. And then… and then we cut to a week later… And Matt Murdock is defending the mud man in court!?

Then Sadie gets a job offer from a theater dude, and then we jump another week, with captions specifically saying Spectacular 56 and Team-Up 107 happen during this week (Ok, sure). Also, Al Milgrom takes over inking from Jim Mooney from here. Now Peter is at ESU, hanging out with Steve Hopkins. They see Deb Whitman, and Pete tries to strike up a conversation, but BIFF RIFKIN shows up and whisks her away to see Evita. So Peter changes to Spider-Man to go swinging around and clear his head (His signature move), when he sees a sign saying a show featuring Sadie Frickett and Her Monster opens tonight. So he drops by the Bugle to get Jonah to let him cover it, and then we jump to showtime…

It’s all going great until the monster sees Sadie making out with her showbiz agent/I suppose boyfriend, and then it flies into a jealous rage. Spider-Man is soon on the scene, noting the thing has forgotten why it’s mad, it’s just mad now. He springs into action.

The cops show up to try to gas it to death, and Sadie gets upset and tells it to flee. It picks her up, and yeah, if the previous scene wasn’t enough, we’re straight up doing King Kong now, as the thing beings scaling a building with Sadie in its hand.

The gas does its work, drying out the mud-monster until it begins to crumble, and drop Sadie in the process. Lucky for her, Spider-Man was already on his way up to save her, and snags her as she falls. The authorities start sweeping the remains up for some scientists to examine, and Sadie is a wreck. Spidey finally says this all reminds him of King Kong, and Sadie’s smarmy agent says he’s been looking into getting a movie made of Sadie’s story.

And that’s that. Kinda crazy Denny O’Neil is writing this bizarre stuff while helping Frank Miller begin crafting his famous run on Daredevil. Very different things. I sure hope I get to see how someone gets Sandman and Hydroman back from this. I bet it’s absurd. Romita’s art instantly becomes so much more recognizable as his own when Milgrom takes over. Mooney is way too heavy handed an inker.

And that’ll do it for this block and 1981 for awhile. Next time we jump ahead to a new golden age for ASM.