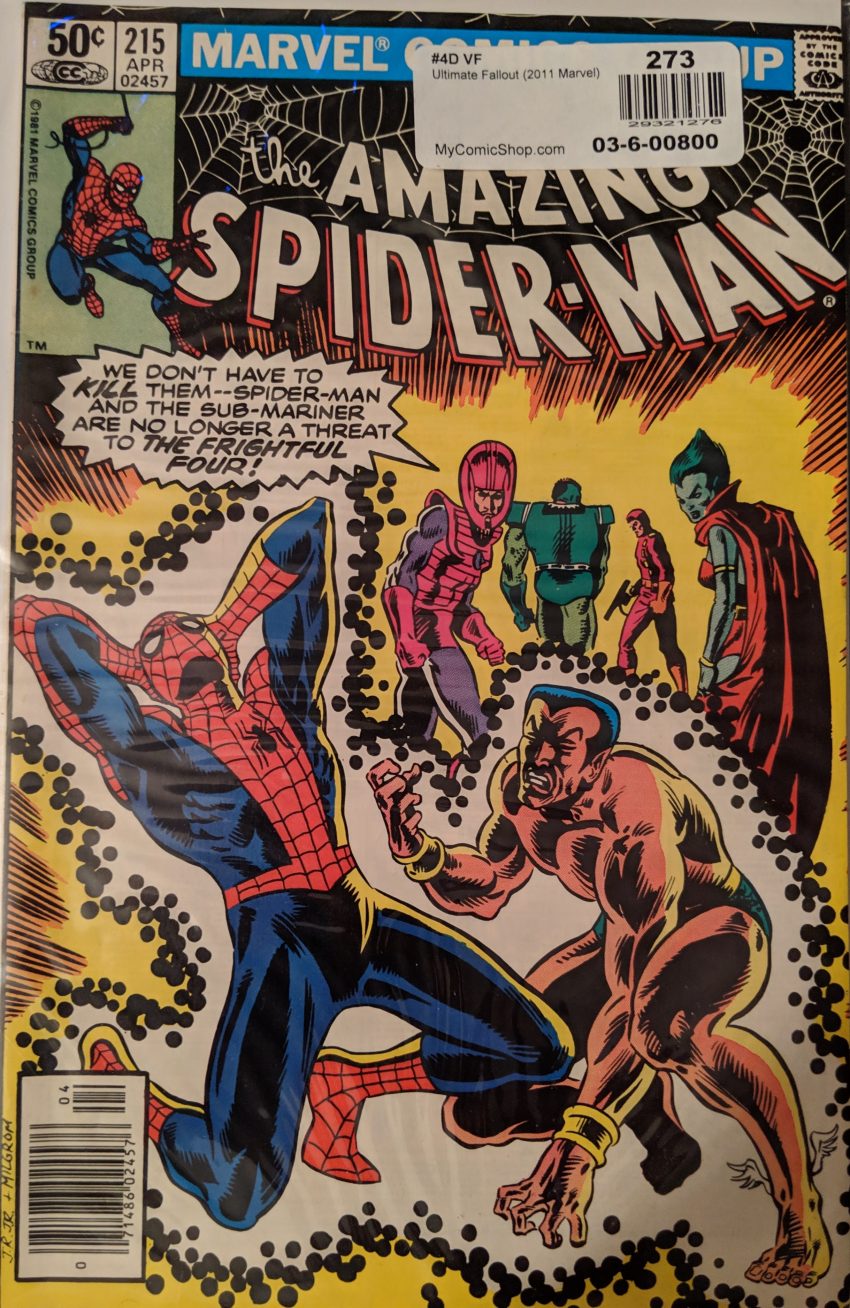 Alright, let’s bring this thing to a conclusion. Spidey & Namor are all messed up from whatever Wizard did to them, so Sandman and Trapster just start beating them up. They’re in no shape to fight back. But at the same time, cops are investigating the hole in the wall at the hotel, and they see all this going down and call in a helicopter.

Spidey webs up The Wizard’s gun for good measure, and the villains all flee. Namor is shamed by his defeat and flies away, but a persistent buzzing in his head is maybe literally driving him mad. Spidey’s not much better, crawling back into his hotel room all beat up. He gets in normal clothes and goes to his new crush’s room lookin for some TLC, but she’s not there, just a crew patching the wall, and so, his preferred option gone, well, you know where he’s gonna go. I don’t have to say it.

Uuuugggghhhh, Peter Parker is such an asshole! He has friends, you know. Tons of ‘em. Harry, Flash, Phil and Hector, to name but a few. But, no. He just keeps preying on Deb Whitman’s affection for him. This stuff is gross. Grosser than I even knew. In Spectacular,  he just stood her up on a lot of dates. This stuff is a lot worse. So he sleeps in her place for 14 hours, and when he wakes up, she’s bandaged him up, made a huge breakfast, and tells him he has tickets to a Broadway show, and he just leaves. He doesn’t even eat the food! “I’ll call you in a couple of days.” Peter Parker is the worst, oh my God! This is so bad. No, no time to be at all nice to Deb, he’s gotta rush off to see what happened to “the girl of his dreams,” as he calls her. But he doesn’t even know her friggin name, so he quickly realizes he can’t really find her. Duh. The hotel eventually tells him she’s been moved to room 407, and since he thinks she might be in trouble, Peter decides to show up as Spider-Man. Oh, yeah, I’m sure that would calm her nerves. But guess who’s in room 407?

Man, if Llyra really is the mystery girl, that will be logistically impossible and I’ll be mad. In Atlantis, a doctor tells Namor something is wrong with his brain, and then he has a little recap of Llyra’s career as a bad guy. He takes off to look for her. Back in New York, Spider-Man just crawls into the hotel room, and his new beloved is there. And then he’s promptly knocked out by Sandman. When he wakes, we finally find out what The Wizard did to him:

Oh, sure, just your average psycho-transference field. Got one in the garage. What was he gonna do if Namor didn’t show up? This feels half-baked. Using the anti-gav disc, The Wizard just sends Spider-Man up into the sky to eventually exit the atmosphere and die. That’s pretty cold-blooded. Lucky for him, Namor flies by looking for Llyra, and sees him floating away like a balloon.

Then the two heroes head back to the hotel and smash a hole in a second room this week. Namor punches the everlovin’ crap out of Sandman…

While Spidey deals with The Wizard. Namor makes quick work of the Trapster, too, thanks to his new Spider Sense, but Llyra is not around. Then Spidey sez they’ll need Reed Richard to get the Spider Sense back in the right head. Surely the Wizard’s gun has a reverse button? I guess not, as we move our scene to The Baxter Building.

That out of the way, Namor returns to the ocean and Spider-Man swings RIGHT back over to ol’ girl’s room. And she’s there this time, and his Spider Sense is going crazy, and he ignores it, even as he gets woozy.

It’s crazy when you can see signature elements of JRJR’s art style in this early stuff that has carried right into the present. His stuff has changed so much, and Jim Mooney is kinda smothering him, but there are tells. Surprisingly Michael Meyers of her considering that yes, she is Llyra, and yes, the previous few issues did strongly imply she was in 2 places at once, and yes, this is very disappointing. Also very worrisome, why was she seducing Peter Parker at all? Do she and/or The Wizard know his secret? What sense does any of this make? Spider-Man figures out she’s been behind everything, but he can’t do anything about it, because she’s still got the whammy on him. Luckily, Namor just flies through the window and knocks her out, boom, no muss no fuss. He knew, even if Spidey didn’t, that his neighbor was Llyra, so he came back to get her. And now he will take her to face justice in Atlantis. And Spider-Man?

Well, that’s nice, I guess. Maybe it wasn’t entirely his fault. I guess he’s been ensorceled since the first time he saw Llyra, so his even-worse-than-usual treatment of Deb was part of it. But… why on Earth was Llyra living in Peter’s apartment building? Did she know he was Spider-Man somehow? What business would she have living in a crappy NY apartment building? No one says. I don’t think it will ever come up. That’s wildly unsatisfying. Also unsatisfying: This story isn’t over yet! We are 5 issues deeps, this is highly unusual for the period. Come back next time to see what could possibly happen next.