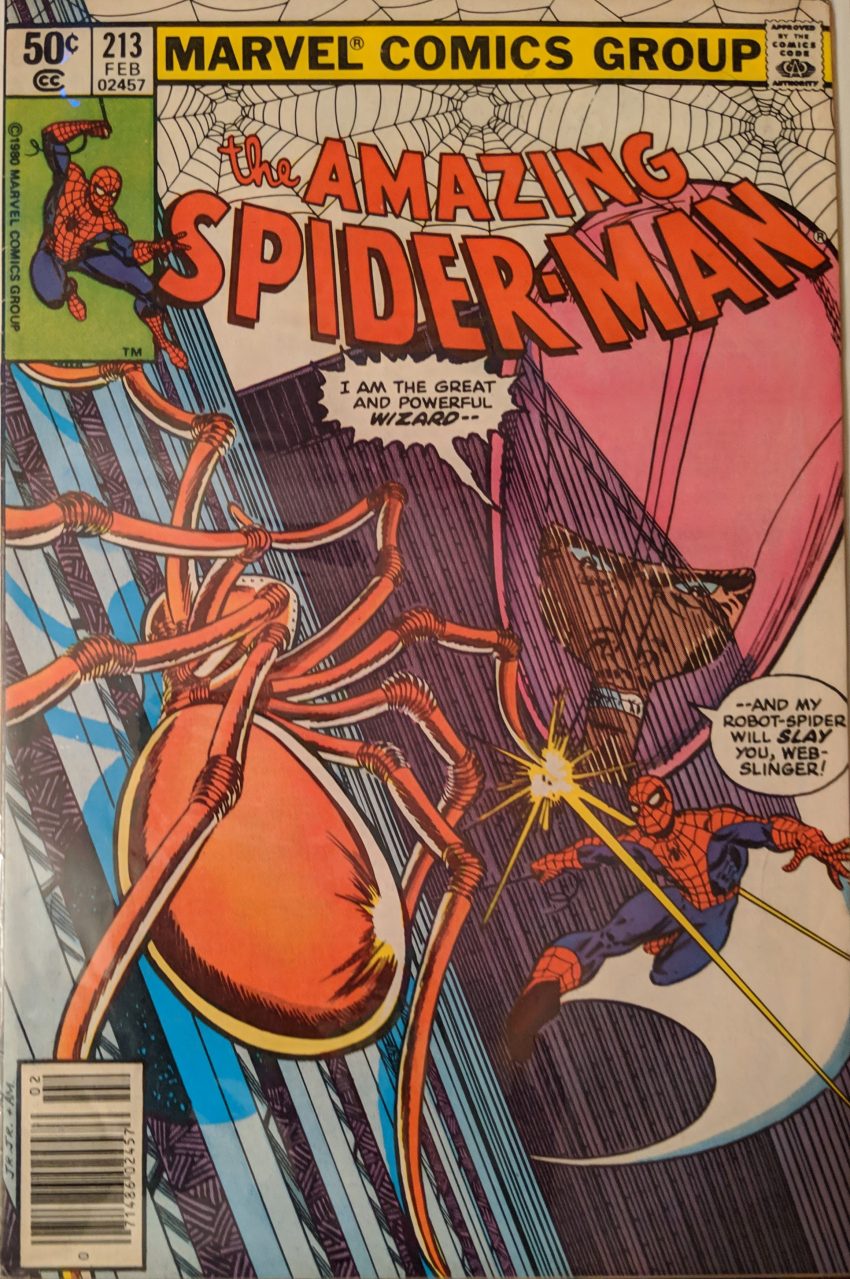 We’re back with the same creative team to see Spidey battle The Wizard. I sure hope this isn’t as dopey as the last time he fought the Frightful Four. It almost can’t be. We begin with a chilling rain storm… in November? Last issue’s take down of Hydro-Man turned on the fact that it was miserably hot outside, and now it’s a cold day in November. Uh… ok. A shadowy figure emerges from the water outside Ryker’s Island with a big ol crazy looking comic book gun, internal monologuing about finding a man who can help them inside. I have just figured out how this issue and the 2 after it are going to go. Based on the last 2 issues and having already seen the next 2 covers, I got it. That’s kind of a bummer, it would be nice to be surprised. But, anyway, the mystery person zaps HER way into the prison, and then The Wizard climbs out. He is still a jerk.

The guards start chasing them in boats, and the mystery person didn’t see this coming, but she did plan for it. Figure that out. A gesture from her hand and a big sea monster appears to attack the guards.

Cheesin’! As we leave the scene, The Wizard can’t wait to get to New York, and for some reason, he’s gunning for Spider-Man. And where is the Spider-Man? He’s at home! Washing his tights! For real, he’s washing his Spider-suit in the bathtub because it’s so itchy from the brine that got dumped on it 2 issues ago (You know, when it was super hot outside and not November).

Yes, our man has used his considerable scientific genius to invent a product you can get in any store. He’s going to let that soak while he goes out for the day with Deb Whitman. I’m sure that won’t end badly. But, as he’s getting ready, his neighbor is terribly singing again.

WHAT? The country singer is this lady? How could he possibly have thought it was a dude? Am I reading this right? And he’s immediately fallen in love with her WHILE ON HIS WAY TO A DATE WITH DEB. Peter Benjamin Parker, you jerk. So he goes out with Deb, and they have fun all over New York in a quick montage. And then this:

Oh, man. Peter Parker is a terrible person, y’all. What are you doing, Denny O’Neil? My goodness. So, uh, Peter goes inside and pulls his Spider-Suit out of the bathtub, and it’s badly faded from the chemicals he used! Wah wah wah waaaaaah. I feel like this is probably what happens to everyone who tries to make their own detergent at home. As he’s discovering this, the radio news show he turned on when he got in has an update:

This feels like karma to me, Pete. He swings off, allofasudden musing on how he sometimes doesn’t feel worthy of his powers and thinks he’s not a real hero, but that’s cut short as he gets to the big robot spider. The Wizard is nearby controlling it, of course, along with his still-shadowed companion. He claims it will either kill Spider-Man or it will help a device he has to get the frequency of his Spider Sense, so they can track him anywhere. See, this is why you don’t go around telling everyone about your magic danger senses. Spidey gets to the big bug and it’s not doing anything, so he yells a taunt at it just to see what will happen.

He dispatches the robot with ease, but now The Wizard has what he really wanted, and Spider-Man has no idea what’s going on. We cut to a totally random dude named “Wino Charlie” deciding to climb up on a rooftop to enjoy his booze in peace… Look, I don’t write this stuff, I write about this stuff… and then we’re told it’s the roof next door that The Wizard and his companion land on, having tracked Spider-Man here. To his apartment. Uh-oh. Peter has just arrived on the ground, complaining that he’s being charged a lab fee at school and doesn’t know how he’ll pay it. He walks past some dudes at the mailbox, more neighbors he (and we) have never seen before, and surmises one of them is his country singing neighbor because he’s dressed like a cowboy. So it wasn’t the girl? That was a confusing sequence. Peter decides he has to sew himself a new costume for the first time in years, and then Deb calls to try to set up a new date, except someone knocks on the door so Peter blows her off (I mean, what else would happen?), and guess who’s at the door.

Ok, whether he’s being creepy or not, that is a funny line in the 3rd panel there. We check in on “Wino Charlie,” now passed out on the roof (Peter’s roof or a nearby roof? I can’t tell anymore based on the captions), then Peter is picking out nice clothes to go to the meeting when the phone rings. It’s JJJ, and he’s offering the exact cost of Peter’s new lab fee if he’ll go get pictures of a collapsed subway excavation in midtown. So then he… throws on his new Spider-Man suit, which he apparently made in like 5 seconds! You gotta be kidding me! He was sewing a nondescript piece of red fabric, then the phone rang, then someone was at the door, then the phone rang again, and now it’s done??? Ok, sure, why not. He swings off to help the trapped workers, and gets pictures of himself doing it, all in about 10 minutes. Wow. Some very efficient superheroing. So he swings home, late for the tenant meeting, and sees The Wizard and Someone Else on the roof next door. He drops in, realizing The Wizard obviously made the big spider, and they start shooting lasers at him. No preamble or explanation. He ducks behind a chimney, and webs up a bunch of the bricks to throw back at his foes. Look at this joke:

As escape plans go, that’s A+. Spidey, of course, swings to their rescue, and The Wizard and his Plus One retreat. Spidey rips a fire escape ladder off the building he’s on and makes a bridge for his neighbors to escape on. No big deal. Except Wino Charlie’s still over there, asleep and about to die. Oh, Wino Charlie, you lovable scamp.

Uh-oh! Next issue it’s Spider-Man versus his own burning apartment! And, based on the cover, a whole lot more!