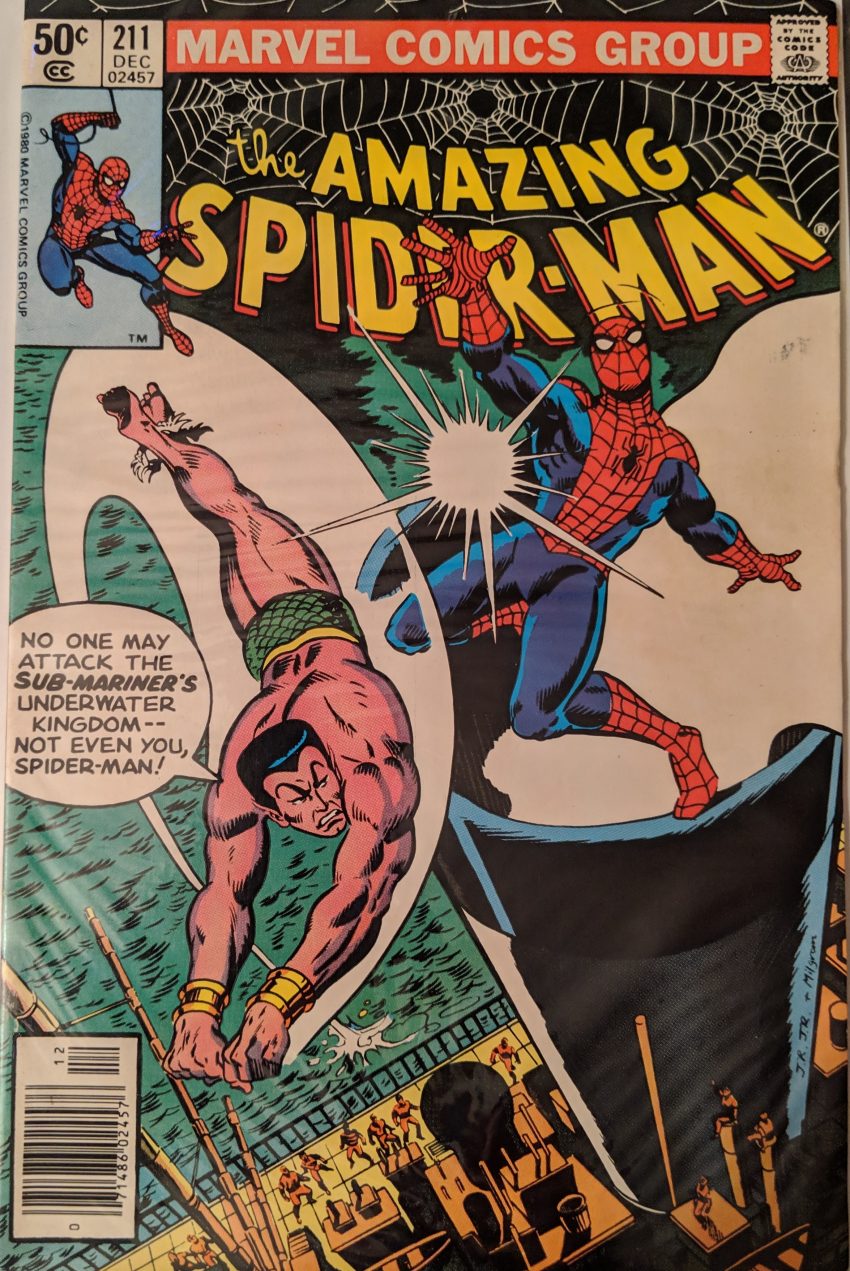 We haven’t checked in with ASM in awhile, but here begins a 5-part epic I’ve never read before. They forgot to put credits on this one, but it’s Denny O’Neil writing and John Romita, Jr. drawing, as it’s been recently. Let’s get to it! Our story begins with Prince Namor, the Submariner, half-human, half-Atlantean ruler of the seas ripping into some kind of deep sea diving machine full of dudes. He’s yelling about how no one shall invade his sovereign domain and whatnot. You know, Namor stuff. Then he decides the dudes inside don’t deserve to die, so he… rockets to the surface with them at top speed. And they don’t suffer any ill effects! This is not how decompression works. Anyway, he drops them on a dock and we learn they were here to investigate the destruction of an experimental power generator down in the sea. Well, this can’t end well.

Elsewhere, it’s 3AM in New York, like it’s a Drake song, and Peter Parker is trying to get some sleep. Trying.

The Saga of Peter Parker’s Terrible Country-Singing Neighbor has begun! He bumbles around in his drawers and closets for his supersuit, bemoaning how hectic his life has been lately, until he’s ready to roll:

Country music is gonna get him killed! Spidey doesn’t like to just swing around aimlessly, so he decides to go check on Deb Whitman’s uncle, like he promised to do in ASM 209. At 3AM! And… and he’s at the docks, and awake, and in trouble! What good luck for Spidey, I guess. It seems some tough guys are trying to back out of a contract on Uncle Whitman.

Those dudes are no match for Spider-Man, of course, but he kinda overdoes it and winds up accidentally flipping a barrel of brine onto himself, which of course shatters and covers him in it. Turns out, Uncle Whitman was contracted to deliver a scientist out to the site of the aforementioned generator, but these guys have heard it’s dangerous and backed out. Uncle Whitman is running out of options.

Now, look, I know Spider-Man isn’t a seafaring hero, but you’d think he’d be more mindful of saying “That’s not my problem!” and swinging away considering Uncle Ben and all. Hey, what do I know? Meanwhile in Atlantis, Namor is drumming up support for war on the surface world among his people, and it’s pretty easy to do what with the generator “disturbing the ocean currents and endangering their very civilization,” as he says. You could say Namor’s prone to exaggeration, so who knows how true that is, but the assembled masses of Atlantis are into it, so it’s time for Atlantis Attacks! Oh, no, sorry, that’s not for another 11 years. It’s just time for Atlantis to attack with no official title. Later that day, at ESU, Peter is still itchy and gross from the brine when Deb Whitman happens by. She worries that her uncle is going to captain that ship since he couldn’t get guys to do it, and he has a bad heart and he’ll be in trouble. Then she wanders off, plot point achieved. Peter tells himself again that it’s not his problem, but he feels guilty, because he’s Peter Parker, so he goes to see Aunt May. Aunt May, still seeming more rejuvenated every time we see her, is teaching her nursing home how to play shuffleboard when he shows up.

Lesson received, Peter switches to Spider-Man and swings off to the docks to help Uncle Whitman (I don’t know his name, what can I do?). At the docks, Spidey encounters Uncle Whitman surrounded by dudes demanding more money for the job, so he announces he’s here to help and starts picking up giant crates two at a time to show off his strength. The sailors take this as some kind of insult, and Spidey has (accidentally?) reverse-psychologied them into shipping out with Uncle Whitman… if he goes, too. So he does. He just… does. Just signs up to go on some kind of ocean mission. How long will this take? Can he really just put his whole life on hold? Once they’re out to sea, Whitman admits he knows Namor is the one sabotaging things, but says he was afraid to tell the authorities for fear they’d cancel the contract, and his livelihood. And then…

Well, this won’t end well. Namor turns around and smashes into Spider-Man full speed, knocking him into the ship’s smokestack. Which worries him, because he doesn’t actually want to kill anyone. He’s basically ready to declare war on the surface world, but also doesn’t want to kill anyone. Not really a tenable position. He flies over to investigate, and of course, it’s a trap. Spidey gets a good hit in, but that only makes Namor angry. Spidey thinks he can use that, so he starts taunting him.

Then he webs up Namor’s wings, causing him to come crashing to the deck. Spider-Man didn’t mean to hurt him so bad, but good luck explaining that.

Denny O’Neil may not be writing all-time classics, here, but he writes a good Spider-Man quip. He rushes over to offer to take Namor to a doctor, and that REALLY gets him going. Spidey protests that he’s genuinely worried about Namor considering he’s been dried out and beat up, and doesn’t want to kill anyone, “especially for no reason.”

Hey, how about that? Diplomacy! Namor even tells them where they can move the generator so it won’t hurt Atlantis and can better take advantage of Earth’s magnetic field. Namor flies off as the ship sets a new course, proclaiming Spider-Man worthy. Now if he could just stop itching.

That seems pretty much over. How is this the beginning of a 5-part story? Well, I don’t know, honestly, but I do know the covers of the next few indicate we’ll be seeing Namor again very soon. We shall see.