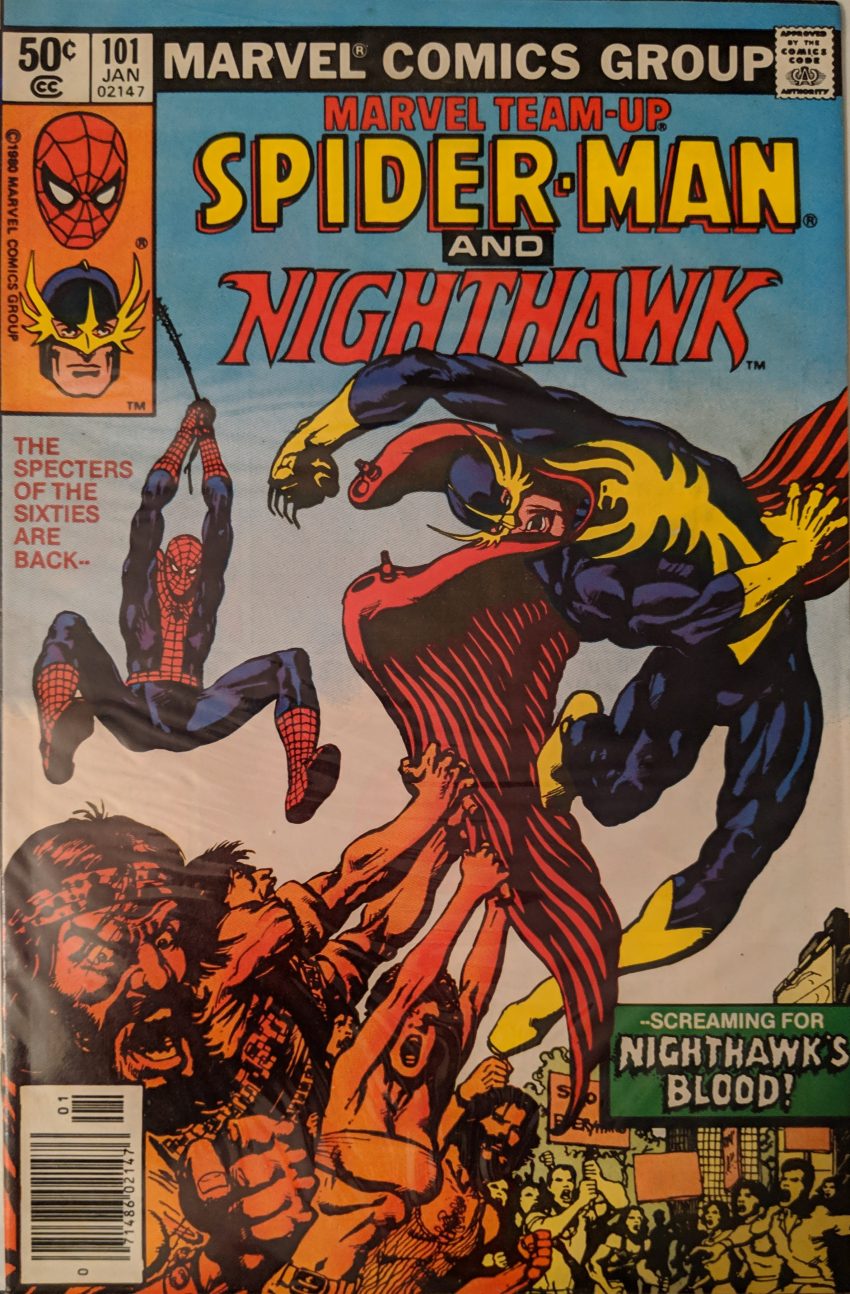 This cover is completely baffling. I can’t even guess what “The Spectres of the Sixties” are. I assume this one is going to be insane. This issue is brought to us by future mainstay Spider-scribe JM De Matteis, penciler Jerry Bingham, and ol’ Mike Esposito, whose name hasn’t appeared in these posts in a while now. And page one is about as insane as the cover:

I’ll just get out of the way up front that I know zero about Nighthawk. I knew he was a Defender. I just learned he’s apparently a Bruce Wayne-type guy. No knowledge. The woman has superpowers. You should be able to tell from that leap, but then again, comic artists love to exaggerate, so I wasn’t sure until the next page, when she lifts Richmond with one hand and throws him at the reporters. Peter Parker is there, of course, and leaps onto the woman, really jeopardizing his secret identity, and she responds by throwing him out the window. Looks like it’s at least 3 stories up. I guess the other reporters probably figure Peter just died, but instead, he can easily switch to Spider-Man and head back in. Meanwhile, that lady is sticking with her line of questioning…

Spidey webs the woman’s face and then yanks the web and her head comes off. Why… would he do this? That’s a crazy violent thing to do to someone. Not a very Spider-Man move. Luckily, she was a robot. The room is now empty save for our heroes and the beheaded robot, who keeps on talking.

Uh, sure thing. We switch scenes for a moment to a mysterious, shadowy figure who sent the robot and has pictures of Mindy in the room, vowing to destroy Kyle Richmond, then back to the scene, where Kyle has now switched to Nighthawk. Turns out, his superhero identity was recently made public, and a footnote says he even dealt with a court order saying he couldn’t be Nighthawk for awhile. There’s one that’s never happened to Batman. Richmond reveals to Spidey that he’s been getting pictures of him & Mindy in the mail for months, and more recently, death threats to go with them. Then he finally gets around to flashing back to tell us who she is.

Spider-Man, being Spider-Man, starts thinking about how Uncle Ben’s death was his fault, but I dunno, man. The difference between killing your girlfriend while driving drunk and some random dude you didn’t bother one time then going to your house and killing your dad seems… vast. But Peter will take any excuse to beat himself up over it, so here we are. He’s gonna help Nighthawk deal with his demons because of his own demons, and away they go to this “reunion.” They head upstate a little, and when they get to campus of Nighthawk’s alma mater, well…

Far out, man. The robot hippies quickly turn on our heroes, saying things like “Turn on, tune in, and die!” and “Fly on, little wing – you haven’t got a prayer.” Oy. Spidey & Nighthawk start smashing all the robots, who put up little in the way of a fight. Then robot riot cops show up and gas everybody, because it’s the 60s (Or, you know, right now). Nighthawk & Spider-Man wake up in chains, with Nighthawk chained up in a car, and their wheelchair-bound tormentor finally appears: It’s Mindy herself! She lays it out: Kyle’s dad told him she died in that car accident, but she didn’t.

Oooookaaaaaay. So Nighthawk started out a bad guy. That’s surprisingly common in Marvel Comics. Mindy sets the car on a collision course with a tree to recreate the accident, while Spider-Man breaks his chains and starts fighting his way to Nighthawk through an army of robots. Spider-Man starts psyching her out while Nighthawk finally gets his head clear enough to break his chains and fly out of the car.

That is… some ending. It does not land for me at all. What a ridiculous comic book. But it’s over now. There follows a brief backup Nighthawk story by Mike W. Barr and Steve Ditko! This is the period where Ditko had come back to Marvel after his big falling out with Stan, but refused to work on Spider-Man or Dr. Strange. Putting his work in the back of a Spider-Man comic seems a little weird. The story is pretty bad, though, and not about Spider-Man, so we’re not gonna talk about it.