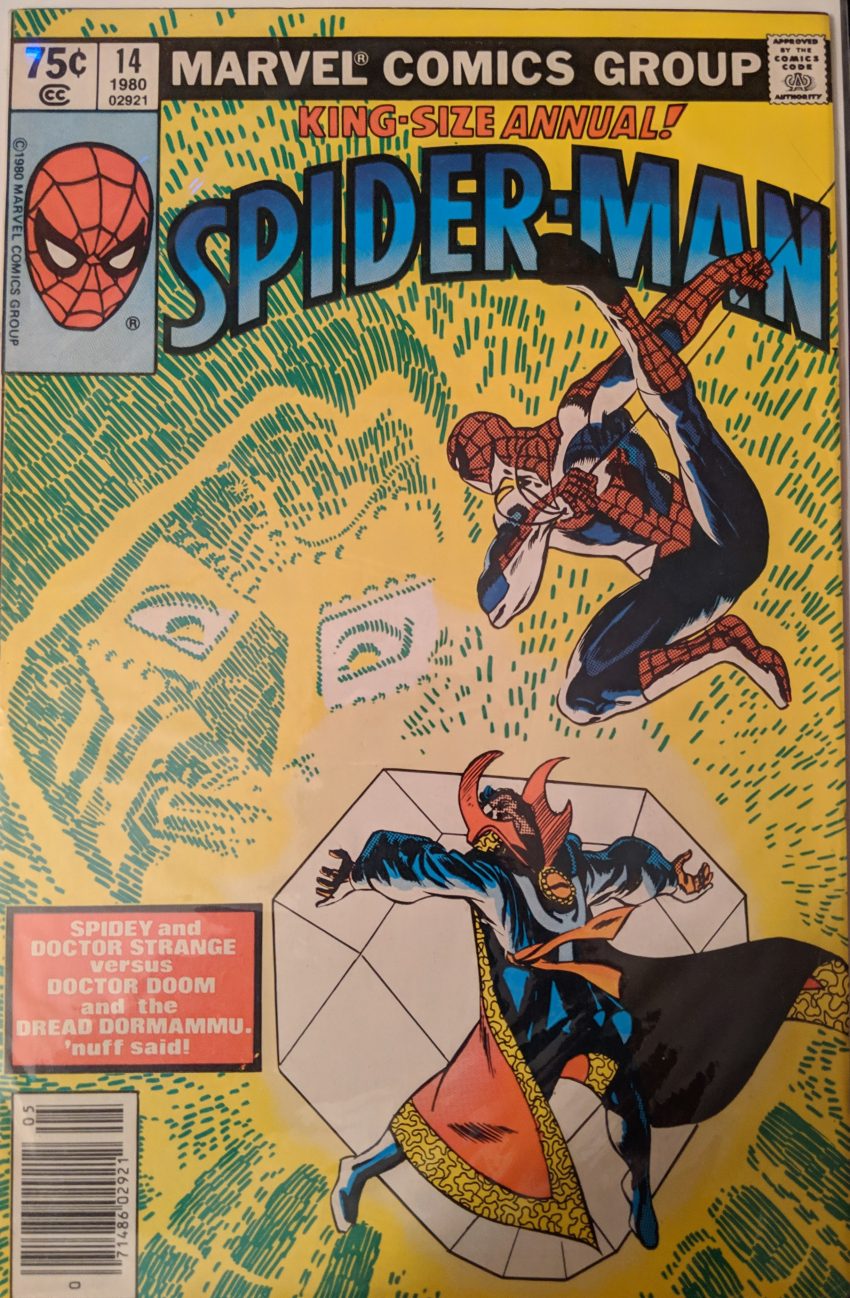 Alright, gang, gather ‘round, it’s storytime! Denny O’Neil, Frank Miller & Tom Palmer are here to bring us a fantastical tale of magic and mystery, and–

“Translation courtesy Dr. Strange.” So you mean to tell me that this awkward and entirely too specific prophesy about Dr. Strange saving the world was told to us by… Dr. Strange? I bet $5 he made this up. Anyway, it’s “a storm-shattered night” in Latveria, where a surprisingly mouthy guy dressed like Toad from X-Men announces he & Dr. Doom’s latest experiment is complete, then demands cookies, and then when Doom chastises him, asks about a reward.

You demand cookies of Doom, you get socked in the mouth with some kinda wizard stick, because he’s Dr. Doom, and this guy looks like a server at some cheap competitor of Medieval Times. Doom announces his reward will be testing his doodad, which will send him to the dimension of The Dread Dormammu. And it works! And Miller gets to go full Ditko for a couple pages.

Soon, Dormammu contacts Doom, interrupting his relaxing evening of watching old Nazi footage (I don’t know if you picked up on this, but Dr. Doom is the bad guy of this story) to tell him his experiment worked, and not only did his goon survive the trip, he’s having a great time, using newly acquired magical abilities to create a giant robot.

That’s a surprise. From there, our scene moves to Dr. Strange’s house, where a big crate is delivered, and when it’s opened, the robot from another dimension attacks!

Strange & Wong quickly find they can’t defeat it, so Strange projects his astral form to look for help. Instead, he finds the mystic barriers protecting his home crawling with more monsters, and they overwhelm him. But just before it’s too late, he calls for help.

Strange’s mystic call for help tries a bunch of other people first, like Daredevil and the Fantastic Four, but they’re not home and this is a Spider-Man comic, so guess who gets it? Peter is working in his student teacher job at the time, but as luck would have it, his perpetually hopeless students accidentally set the lab on fire. For once, Peter’s free & clear to run off to be Spider-Man. Almost.

Poor Deb Whitman. That’s her storyline, really. “Poor Deb Whitman.” Or Debbie. Or Debra. Seems like every writer calls her by a different variation of her name. Spidey swings to Strange’s house, but he’s soon attacked by gargoyles from a nearby building come to life.

He runs around with them for awhile before webbing one up and smashing it into the other. Then this happens:

Komedy! Then he’s immediately attacked by some headless goblin things while still more Komedy happens in the background before finally getting into Dr. Strange’s wrecked home. There, he finds a badly beaten Wong, who tells him Dr. Strange’s sent out a telepathic message…

So now Spidey is off to the famous punk rock club to look for a missing sorcerer.  Who is currently being taunted, a prisoner of Not-Toad. Peter switches back to his regular clothes to scout out the venue just as Shrapnel, a band who’ve been advertised in recent Marvel Comics of the time, takes the stage! Now that’s marketing synergy. Some woman immediately starts hitting on him. Here’s the thing, tho: This is where Peter was supposed to take Deb tonight. And guess who went without him?

Poor Deb Whitman. Pete chases her out of the bar only for both of them to literally run into the little dude holding Strange prisoner, only now dressed like a normal person. Pete tries to salvage things with Deb, saying he came out looking for her, and they go for coffee. Then he promises to prove he didn’t stand her up by taking her to the all-night steakhouse on Third Avenue, and FOUR PANELS LATER stands her up for a 2nd time tonight!

Come ON, Parker! But, you see, Shrapnel has been made into a vessel for The Bend Sinister, the evil concurrence Doom and Dormammu are trying to bring about, and they’re leading a hypnotized crowd through the streets. He had no choice but to leave. What he COULD have done is not randomly go on a date with her in the middle of trying to fight off a demonic invasion, I dunno. Just a thought. Spider-Man follows the ever-growing mob as they travel all through Manhattan chanting “bend sinister.”

And soon enough, the little guy appears on top of the Latverian Embassy with Dr. Strange tied to a giant gem and announces The Bend Sinister is commencing. New York starts to look more and more like the Dark Dimension as Spidey swings up to confront the guy. He unleashes his robot, of course, and the battle gets underway.

Spidey eventually blinds the robot with his webbing and drives it into the giant crystal, smashing it and freeing a very angry Dr. Strange.

But before he can punish the lil’ guy, he’s pulled back into the Dark Dimension. Spidey asks Strange, like, what just happened, and Strange, well…

Such a charmer, that Dr. Strange. Later, a gift materializes in Dr. Doom’s castle, a small gem with Dilby trapped inside. A souvenir from Dormammu, he concludes. And with that, he’s off to plan his next act of villainy. The End.

A lot more of a straight Spider-Man story than the team-up you’d expect at first. The most lasting effect of this one will be the fresh indignities heaped on Deb. When we saw him back in Spectacular Spider-Man 27 & 28, Frank Miller’s art didn’t really look like FRANK MILLER yet, but this is certainly the guy who would soon be revolutionizing Daredevil. Interesting to chart a few stages of his progress.