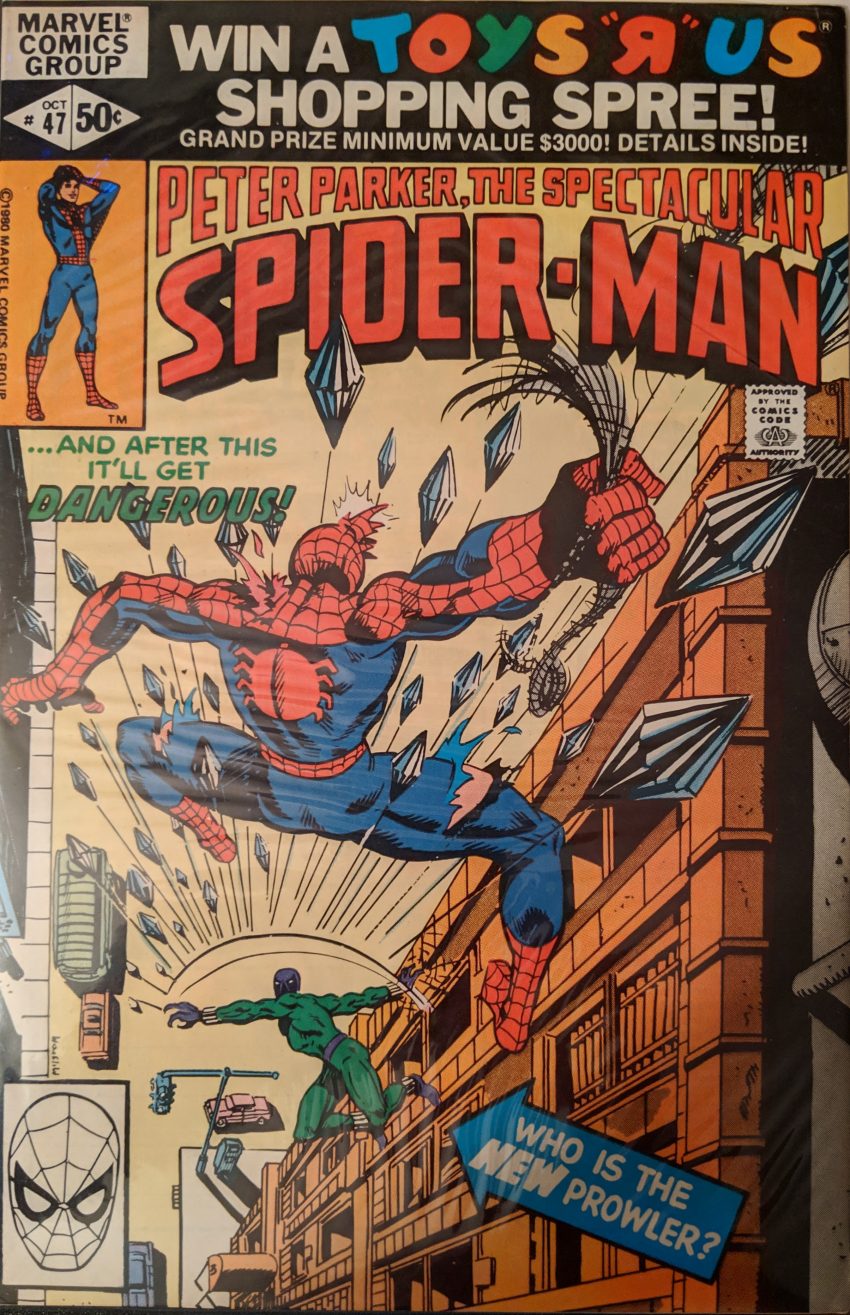 Marvelous Marie Severin is back for art duties as we find Peter Parker out on a date with Debra Whitman. But he sees Spider-Man being blamed for a rash of break-ins, so he decides to take Deb home and go investigate. And she, of course, takes it personally, and he feels bad.

Same ol’ song and dance. Spidey finds his way to the latest crime scene, where Peter Parker is able to walk in as a member of the press and get some info. Someone broke into the apartment of Steve Daughtry and Desiree Vaughan-Pope, fashion icons. The cops say they’re almost through with their investigation as Peter is arriving.

Desiree’s bodyguard chased the culprit out on the balcony and got thrown off. Evidence like claw marks in the wall outside seems to suggest The Prowler, but when the cops find the web bundle Spidey kept his regular clothes in on the roof, that “proves” it was Spider-Man. So Spidey goes to roust Hobie Brown, The Prowler, not seen since way back in ASM 93, from a good night’s sleep and get some info. Where’s he been, anyway?

Hobie says he gave up being The Prowler and locked away all his gear in the basement of his building. But, when they go there, they find it’s all been stolen. Meanwhile, we meet the new Prowler, and find out he works for Belladonna, from a few issues ago.

He’s shaken up after accidentally causing the death of that bodyguard, and the calculating Belladonna uses that against him, saying she’ll turn him in for murder one if he doesn’t do as she says. Since Spider-Man is being blamed for the crimes he’s committing, she decides to use that to try to set a trap for the wall crawler. The next day, Peter Parker visits Aunt May in the nursing home, and is delighted to see she’s bragging to her new friends about the time Spider-Man rescued her (ASM 200), which is a nice change of pace from her always being afraid of him in the old days. But then he heads to school…

Sheesh. Anyway, later, Spider-Man is herded into a trap by Belladonna’s goons, brought face-to-face with her Prowler. He implies he’s fought Spider-Man before and knows he’s got no chance against him and no choice but to do Belladonna’s wishes, so they engage in a pretty one-sided fight.

During said fight, Prowler sprays Spidey with Belladonna’s gas, tipping him off as to who’s in charge of this mess. However, Prowler succeeds in luring Spider-Man into a sealed room.

The cat burglar from ASM 30! That’s a deep pull. Good thing we started with that issue. No backstory needed. Seems like Spider-Man is definitely going to die this time. I guess we’ll find out next issue!