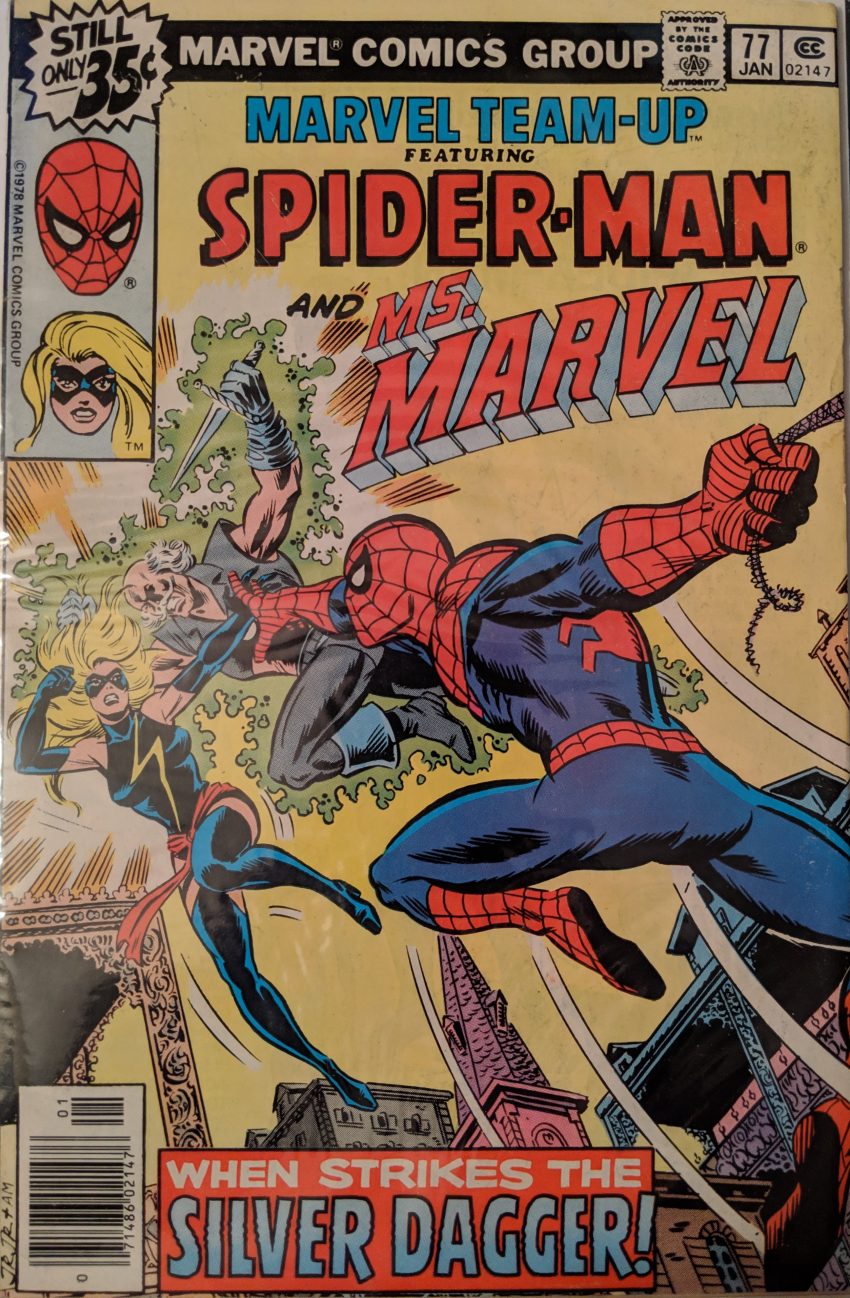 Last issue was basically a Dr. Strange story with Spider-Man and Ms. Marvel standing in the background going “Whaaaa?” This one doesn’t even credit him on that instantly-recognizable John Romita, Jr. cover. So that should be interesting. Is this the first time JRJR drew Spider-Man? That would be momentous. Anyway, the story. Dr. Strange is now traveling the Astral Plane with Marie Laveau, who hits him with the whammy to give them a “full psychic rapport,” which is such a Claremontism. Back at her house, Spider-Man and Ms. Marvel find their magic disguises fading, even as an army of weirdos bursts in.

It’s fightin’ time. Spidey & MM find their opponents knock down easy, but get right back up, and begin herding them toward Dr. Strange’s unconscious form. Then things get worse.

S… Satannish? Hey, ok, why not? I wonder if Jonathan Hickman ever read this. That top panel is a lot like when Ebony Maw was corrupting Strange in Hickman’s Infinity event, and Hickman also had a memorable thing in his Avengers run with Strange seeking out forbidden and evil lore to heroic purposes. I’ll probably never know. Anyway, Marie Laveau just swapped places with Strange’s astral form and her master, trapped in the Orb of Aggamatto… the Silver Dagger. Who looks… ridiculous.

Who let Grandpa get trapped in a mystical object wearing a belly shirt? He looks ready to go fight He-Man. Inside the Orb, Strange flies to find Clea’s trapped soul, and boy, do things go wrong. He finds her being burned at the stake by “mystic fire,” and when that’s done, she emerges a new being, made of red fire, who hates him pretty bad.

Huh. I am not a Dr. Strange guy. Is this the first time her background was revealed? I know that bit of lore, but I’ve barely read any Dr. Strange ever. Seems like a pretty big event to happen in Marvel Team-Up rather than in Dr. Strange.

Take that, Grandpa Dagger! Spidey & Carol just start wailing on the old dude while Marie Laveau picks up his trademark silver dagger, and in the Orb, Strange is barely staying alive under Clea’s assault.

That’s a good Spidey quip, but it’s not enough to stop him from being dragged into the Orb by evil tentacles, leaving Ms. Marvel to fight grandpa alone. For a second. But Spidey’s entry into the Orb has a big effect on Strange’s battle…

…and Marie Laveau gets revenge on Silver Dagger at the same time. And then we seemingly jump way forward in time, as on the next page, everyone teleports back to Dr. Strange’s house. Strange puts Clea’s soul back in her body, wondering what her demonic makeover in the Orb means, Spidey & MM just leave, and Silver Dagger is stuck back in the Orb. That leaves Marie, who tells Strange she was working for good as much as she could behind the scenes as Dagger’s slave the whole time. Whether that meant having her goons try to kill his body to keep Dagger trapped or stabbing him herself when the time came.

And that’s that. Pretty big Dr. Strange stuff going on here, especially for a book that didn’t even mention he was in it on the cover. That just seems weird to me. Looks like Claremont went on to write Dr. Strange a year later for a bit. Maybe he was setting this stuff up for himself. Who knows? Dr. Strange fans, probably. If you are one, feel free to clue us in!