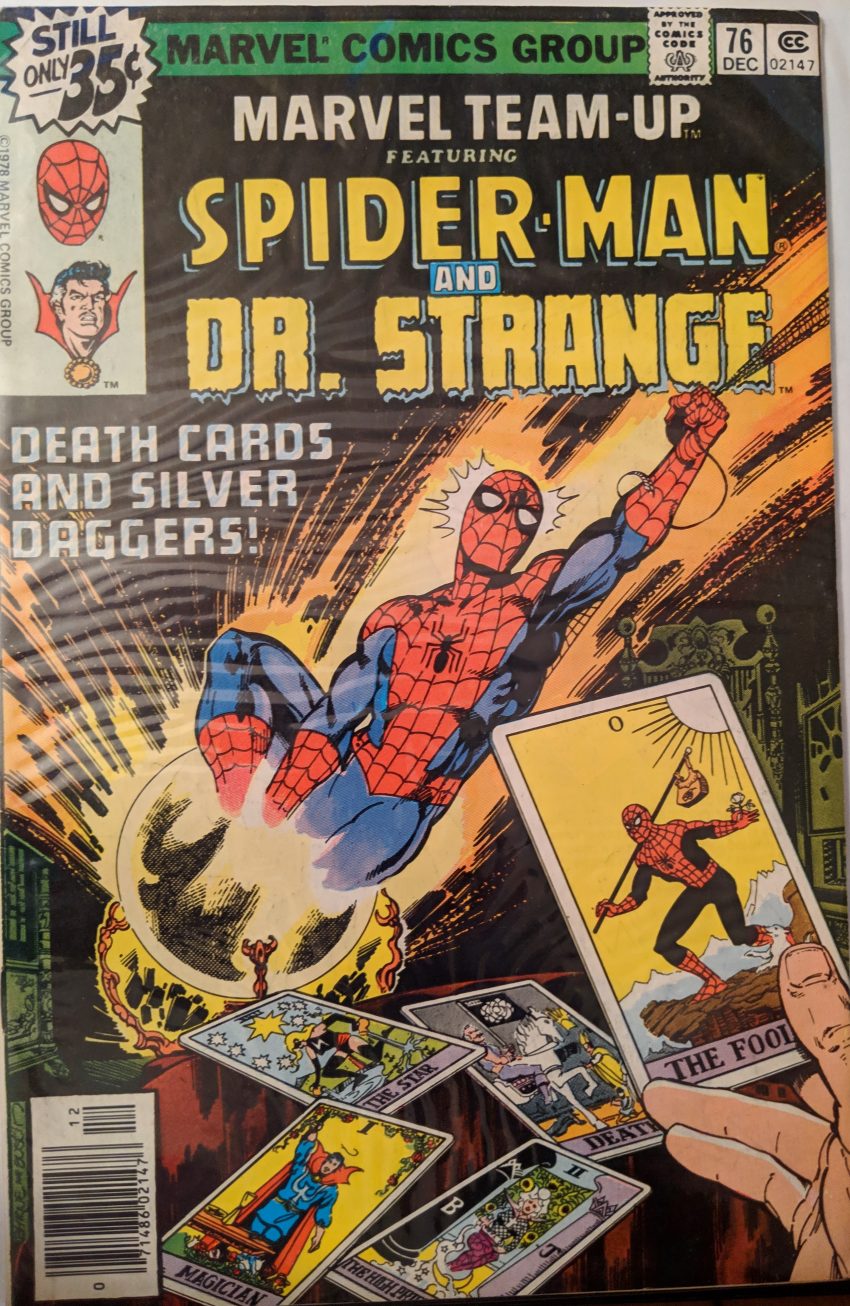 Chris Claremont is joined by Howard Chaykin and a couple of inkers for this one. I think Chaykin might be fresh off the Star Wars comic, at this point? I’d have to look it up. Anyway, it’s some kinda tarot card-based Dr. Strange story, and here we go. Chris Claremont is talking all about the tarot in the captions as Spider-Man swings by Dr. Strange’s house. Strange calls out to him, but he doesn’t hear. Strange talks to himself about having been delivered a tarot deck in the mail with no return address today, and feeling compelled to lay it out. Then Clea walks in, irked that he’s been ignoring her all day, and they leave the room, not seeing the Orb of Aggamatto beginning to glow. Spider-Man has landed and switched to Peter Parker, intent on just having a night out and being a regular person, and still the Orb continues to glow at Strange’s house. And that’s when somebody pushes Carol Danvers off a bus, right into Wong.

Oh, hi. I guess she’s gonna be part of this story, too. Back at the house, Strange is still looking at his tarot reading when Clea walks in and sees the Orb going crazy. A demonic being explodes out of it and attacks them.

Out on the street, Carol is helping Wong pick up his groceries when he gets a telepathic SOS from Strange. And he runs off to the house, bumping into Peter Parker, who recognizes him and then gets a Spidey Sense jolt that lets him know something’s up at Strange’s place, so he switches back to Spider-Man. He rushes in to find Wong staring in horror at Strange & Clea’s seemingly lifeless bodies, and then Ms. Marvel shows up, too.

I guess maybe this is her first appearance in this costume outside her own comic. Anyway, Strange wakes up and casts a spell on himself to temporarily rejuvenate him. He explains the situation as he knows it to the others, saying Clea’s soul is trapped in the Orb and all he knows is it’s related to the tarot deck, which had a post mark from New Orleans, so he teleports himself, Spidey & MM there. They appear on Bourbon Street, of course, like a bunch of tourists. Strange cloaks them in a spell that makes them look like regular people (And turns Ms. Marvel black for some reason?) and then follows a mystic energy trail to a shack in the woods. Inside, it’s more like a mansion, and its occupant is…

Aw haw haw! De plot thickens. In the 1800s, Marie Laveau was a real person, a practitioner of Voodoo, and also, it bears a mention, not white. Her name’s on all kinds of kitchy things in New Orleans. Why am I getting the feeling this whole story resulted from Claremont going on vacation? Yeah, so, she sent the tarot as a warning, she says, and as a friend. The whole situation has to do with a Dr. Strange enemy called Silver Dagger, who I know nothing at all about. He’s apparently trapped in the Orb of Aggamatto, and when the Eye of Aggamatto was recently stolen in the Defenders comic, it opened a gateway that let him kidnap Clea’s soul. Or something. It’s kinda hard to follow. Laveau says Strange has to master a mystic tome he knows is evil to win, and he also says his tarot card reading said he would be betrayed. Even as he thinks that, the house is surrounded by goons who plan to kill our heroes. But he agrees to do what she says.

Well, that’s a weird thing. I guess we’ll see how this shakes out next issue.