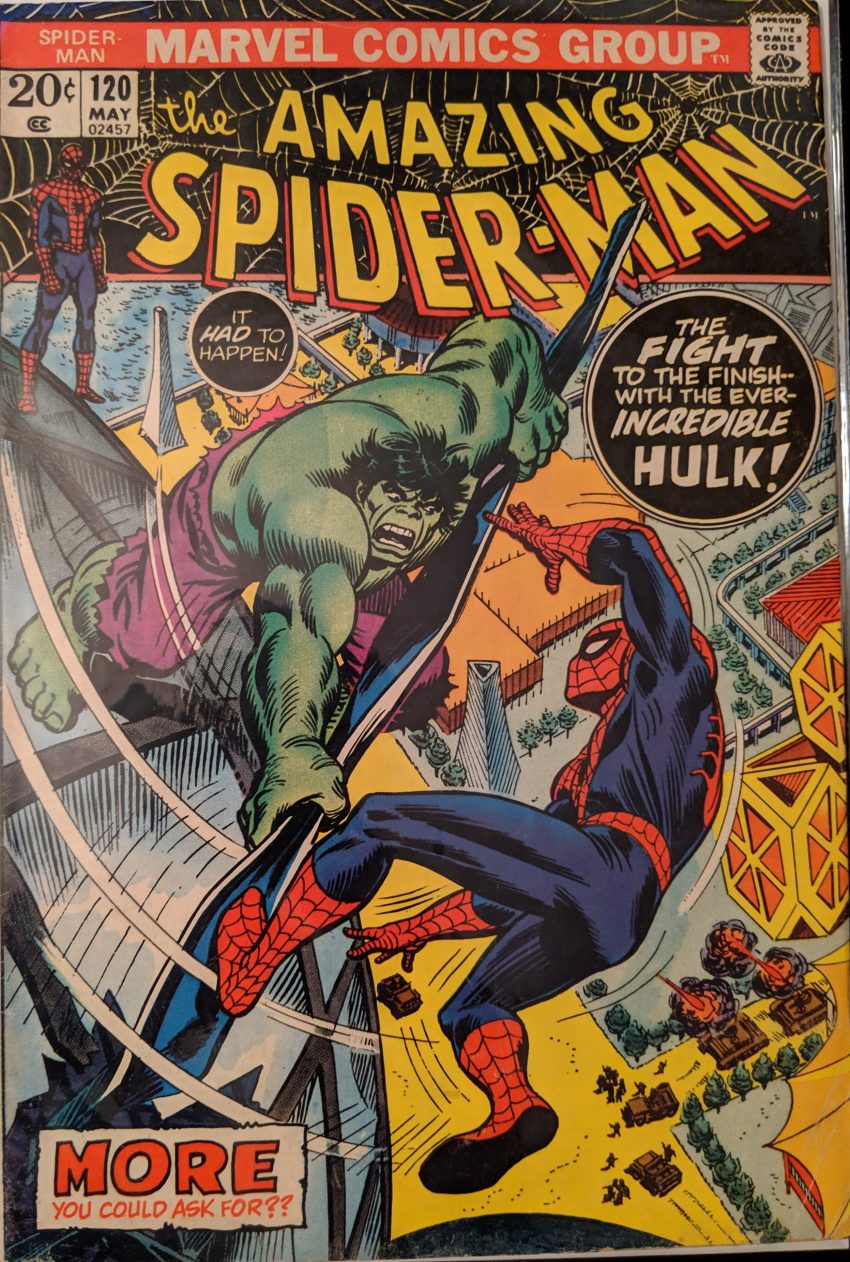 We’re back with the rest of Spidey’s Hulk situation. Now Gil Kane’s drawing with John Romita & Tony Mortellaro on inks. In the flood, The Hulk throws a huge piece of the dam at Spidey, and he grabs on and lets it carry him up to the surface and safety. Meanwhile, still beneath the water, Hulk is making things worse.

As a tidal wave knocks over several of the jeeps closest to the dam, Hulk emerges from the water…

That’s a funny caption. Especially since last issue implied Hulk was in Canada in his own book, as well. Wonder what the issue is. Ross orders everyone to spread out and find the Hulk while he takes a helicopter back to Montreal. Spidey hitches a ride on the bottom, figuring he’s done his bit for JJJ and can get on with his business with Rimbaud. But first…

Peter’s so distraught he almost doesn’t notice the guy in the coat tailing him. Almost. Within moments, Spider-Man has appeared to haul that guy up the side of a building and demand some answers.

It’s Ross, of course. He wants to know where The Hulk is, and accuses Spidey and the Hulk of being “in this together.” In what together? Spidey smashes the spotlight with a web ball and escapes, changing to Peter Parker and heading back to Rimbaud’s office.

What a hilarious little joke! Pete & Miss Delon hop in a cab to go see Rimbaud, who’s with a client at the site of the 1967 World Expo, and more of Ock’s goons follow, but Peter really can’t catch a break today, as a 2nd vehicle he’s traveling in is randomly attacked by The Hulk.

Oh, is that all. So now it’s time to switch to Spidey and fight the Hulk in the abandoned attractions of the Expo. Big set piece.

Ross’s forces have seismic equipment to monitor for the Hulk, and he & Spidey fighting is enough to tip Ross off to their location, so the military mobilizes again. As that’s getting underway, Spidey’s still trying to figure out what to do with his big green dance partner.

As Spidey and Hulk smash their way through things I assume the people of Montreal were familiar with, the military finds Miss Delon  in the wreck, and so does the oft-mentioned Mr. Rimbaud. Mis Delon thinks the Hulk must have Peter…

I mean… I certainly don’t need to ask, because I’ve been reading the rest of this issue? Weird captions, man! Just as Hulk is about to crush Spidey, Ross shows up in his helicopter, firing machine guns. Hulk has had enough, and once again leaps off into the distance. Spidey cuts his losses and switches back to Peter Parker to meet back up with Delon, and finally meets Rimbaud. Very briefly.

Ock’s goons are pretty good shots when they’re not shooting at Spider-Man, it turns out. Miss Delon tells Peter not to blame himself, saying Rimbaud had many enemies. With nothing left to do, Peter hops the last plane back to New York, and that’s our story. Kind of a strange detour, all things considered. But Kane & Romita sure did render an insane fight. Honestly, this looks better than the reprint I had, too. I cannot believe it. I replaced all the pictures with new ones in these two posts, and everything looks nicer. Crazy! Anyway, come back next time for one of the most infamous comics in Marvel history.