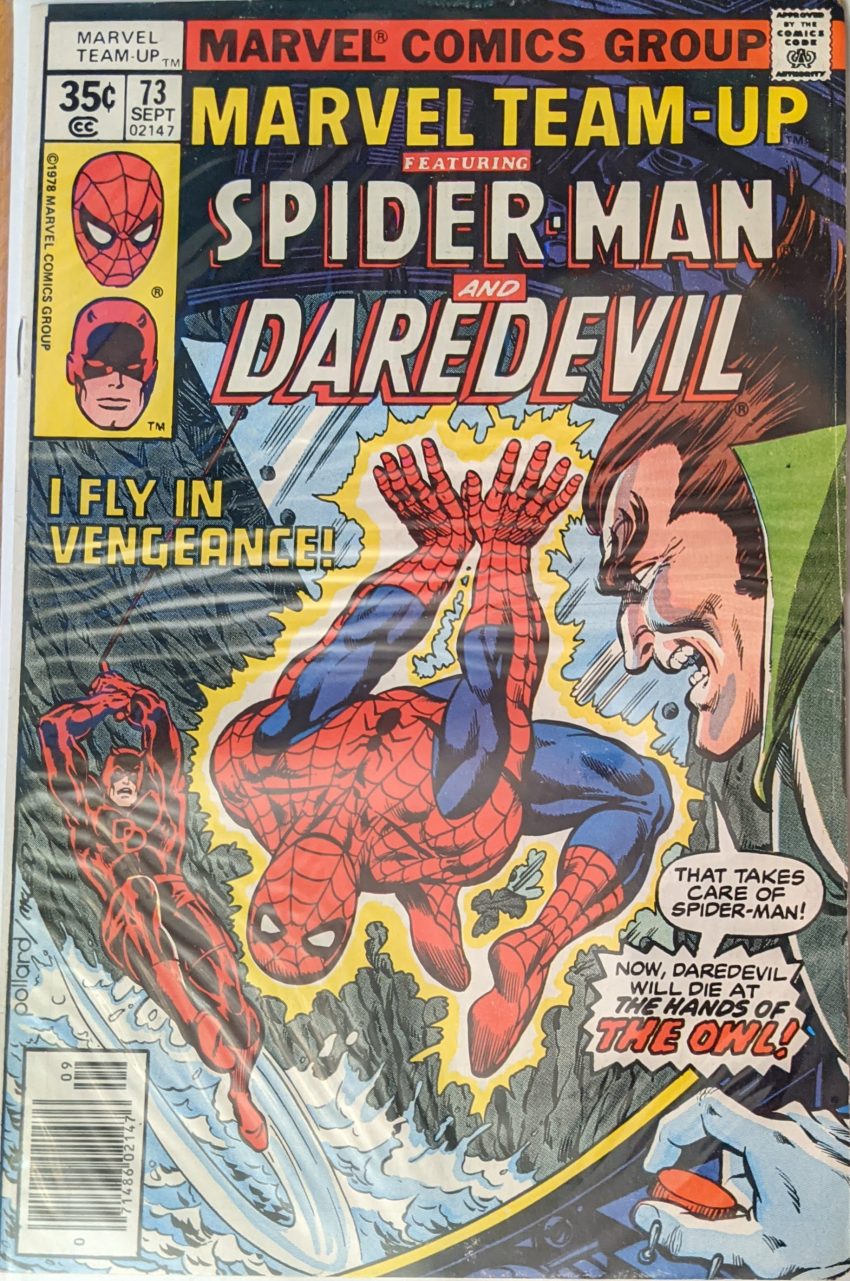 (One of 77) Can this issue live up to an unusual 2 months of hype? Let’s find out! This one’s written by 70s stalwart Gary Friedrich, creator of Ghost Rider, and features what I’m told is the comics debut of long-time penciller Kerry Gammil. Inks by Don Perlin. Things kick off with Peter Parker trying to hire Matt Murdock. Now that’s a new one! But he doesn’t even get his name out before Matt senses The Owl’s helicopter flying by.

DD knowing who Spider-Man is but not knowing who Spider-Man is is a fun thing. The Owl himself is actually in New Jersey (Clearly where all supervillains live). He starts monologuing at literally no one about how he survived his last battle with Daredevil, but since that’s outside the scope of this project, so is his explanation. He’s not dead, though, that’s what matters, and he still hates DD, like, a lot. So he’s sent his goons to pull a diamond heist to lure DD into a trap. Meanwhile, a sullen Peter Parker is walking down the street. Having your lawyer walk out on you when you’re trying to “provide for Aunt May incase something happens” (So like life insurance? A will? Does Matt do that?) when he decides to swing around as Spider-Man to clear his head. Like he does all the time. And what should he swing into but the Owl’s robbery? As he lays into the goons, we see DD has also shown up.

That Daredevil charm! So Spidey starts being a jerk, too. They start competing to see who can chase the Owl’s chopper better, even as DD thinks to himself that there’s no one he’d rather have at his side in a fight. Weird way of showing it. The Owl is pretty happy back in his base, watching DD run headlong into his trap, even if he wishes Spider-Man hadn’t shown up. They eventually make it to the base, still being jerks to each other and everyone they meet…

Spidey tries to get in the big doors, but the Owl electrifies them, and Spidey nearly falls to his death, but DD saves him. Then the Owl just opens the doors (this being a trap and all), and throws a 3D projection of giant owls at our heroes. DD can’t see them, of course, so that doesn’t really work…

Owl throws his goons at our heroes as planned, and it goes about as well as you’d expect.

So The Owl had his goons kidnap this scientist to save his life. Ok. This is… a terrible plan. Like, terrible! Also, there’s 2 more lettering mistakes on the next page. They say lettering is one of those things you only notice when it’s bad… I’m noticing, Denise Wohl! Spider-Man, not knowing any of DD and Owl’s history, just wants to get this over with. But it gets more challenging as all of Owl’s goons return, and they eventually dogpile DD.

Good grief, that’s a rushed ending. I wonder how the Owl got out of brain death? I guess we’ll all have to find a DD blog and find out. And that brings this period to a close. This is the first decade of Spider-Man comics I’ve managed to completely close out. Gonna be awhile before another one. But next post we return to the overstuffed early 1990s.