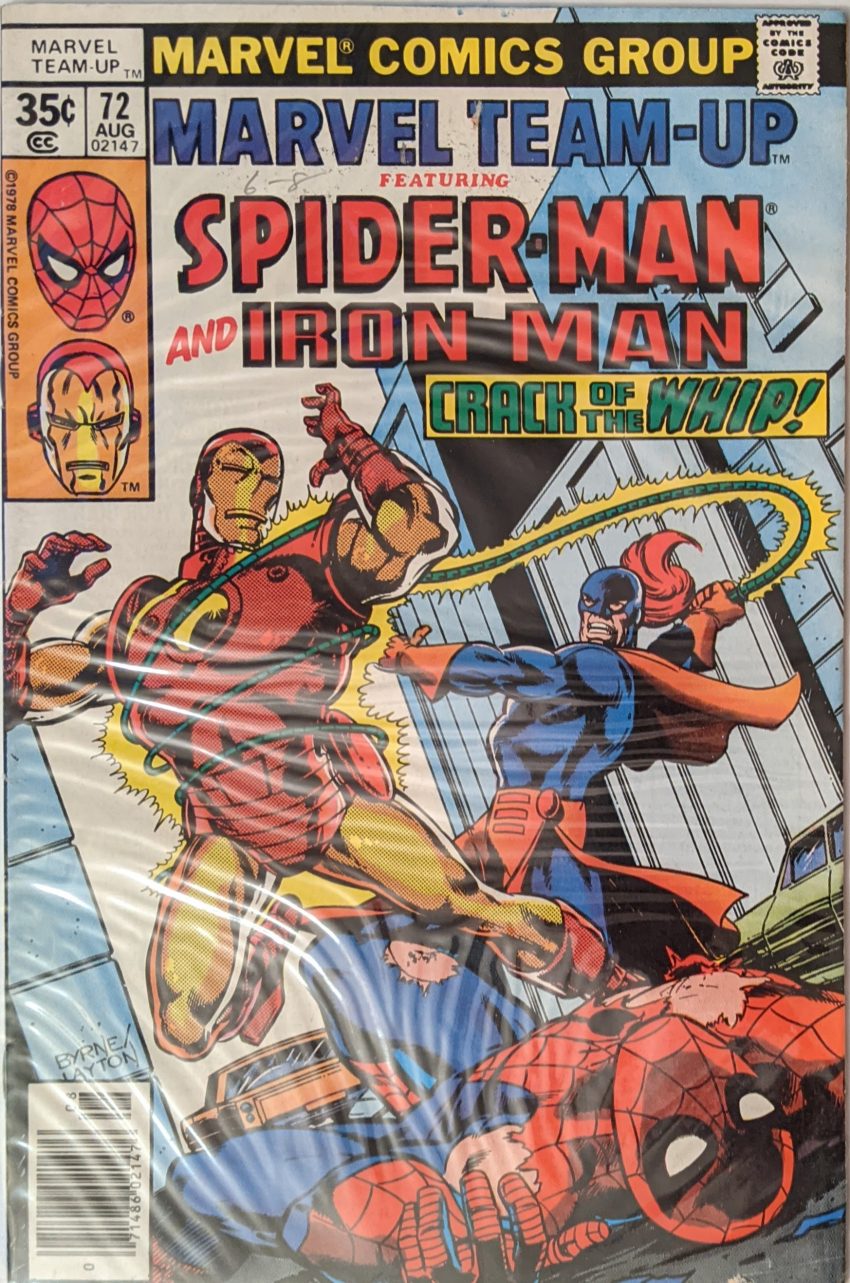 (One of 77) MTU 71 said that next issue would feature Spider-Man and Daredevil fighting The Owl, but that’s actually MTU 73. I guess the schedule was just all out of whack at this point. Bubt they clearly needed a fill-in, and nothing says “fill-in or inventory story” like Bill Mantlo, this time accompanied by Jim Mooney inking himself. The Byrne cover is a surprise. Strange circumstances afoot. Anyway, Spider-Man has just stumbled upon some dudes stealing a van full of furs as we get rolling. The goons helpfully tell us their guns are equipped with drugged “mercy bullets” so that Spidey can get shot as they try to escape and not die.

The drug hits him immediately, but he manages to flip their van. By the time they come out, though, he’s in no shape for superheroing. And that’s where the boss comes in.

Yes, Whiplash. Last seen on the blog, due to our out of order nature, in the far future MTU 145. You may know him as one of two villains mashed up into the villain of Iron Man 2. But I think you’ll agree this is a very different presentation than that was.

Ah, an artist with the lash. I’m not sure you can get that in a gallery. Every single cop in a Bill Mantlo comic is Irish. Our maestro has to run for it before he can kill Spider-Man, who tags him with a spider tracer and passes out. He awakes in a police lab to the faces of his friend and ours, Police Captain Jean DeWolff, some cops, and… Iron Man! Iron Man is, of course, Whiplash’s regular dance partner. Well, sort of. A caption says they haven’t fought since Tales of Suspense 99, and that was a looooong time ago, even for this comic. The doctors here helped get the drugs out of Spidey’s system and patch him up while DeWolff called in a Whiplash expert. Which, as we saw back in MTU 50, isn’t as random as it seems, since Mantlo took DeWolff to Iron Man’s book for awhile. Iron Man mentions Whiplash worked for The Maggia when they fought, so that’s a cue to cut to a mansion in New Jersey, where Whiplash reports to his boss.

They don’t have time to fight, because Jean DeWolff has driven Spider-Man and Iron Man to the mansion in her antique hot rod! She’s still got it, but how is this the most efficient way to get there?? Spidey & IM split up to make their way into the mansion, telling DeWolff to wait in the car since she has no jurisdiction in Jersey, but Jean has heard some rumors about the Maggia that make her want to do her own investigation. Iron Man smashes through a window into “The Murder-Maze,”  a hall of mirrors with Whiplash in it. They had this just laying around? I know you won’t believe this, but it turns out some mirrors aren’t enough to stop Iron Man from grabbing the one whip attacking him and yanking Whiplash into the open. Meanwhile, elsewhere in the house, Spider-Man starts hallucinating spiders and giant snakes, and I briefly worry Mysterio is here, because he’s the worst, but no. We learn who Whiplash’s boss is, and…

The Wraith! He’s back! Man, last time we saw him, he was getting killed trying to avenge Jean’s death in ASM 278, but now we’re back to this. He’s still a coldblooded one in this period. He hypnotizes Jean into wanting to shoot herself in the head. He then makes Spidey go flying across the room… right through the wall into “The Murder-Maze.” This gives Iron Man a great distraction in his fight with Whiplash, and surprises Wraith enough that he drops his control over Jean.

She may be an ordinary cop (With an odd fashion sense), but Jean DeWolff is one of the baddest women in the Marvel Universe. She gets through to her brother, but that doesn’t actually work out too well, as Whiplash, uh, whiplashes her, sending Iron Man into a rage. But now, Brian’s on the good guy’s team, and he wants first dibs.

Kind of a heavy last panel, there. And for a 2nd issue in a row, we’re told Daredevil & The Owl will be in the next issue. And this time, it’s true! But what about Big M? The mysterious Maggia boss with the name that sounds like he should be a forgotten McDonalds character? I guess he wasn’t back in the picture yet. But he’d show up just a few months from now in the already covered TAC 25.