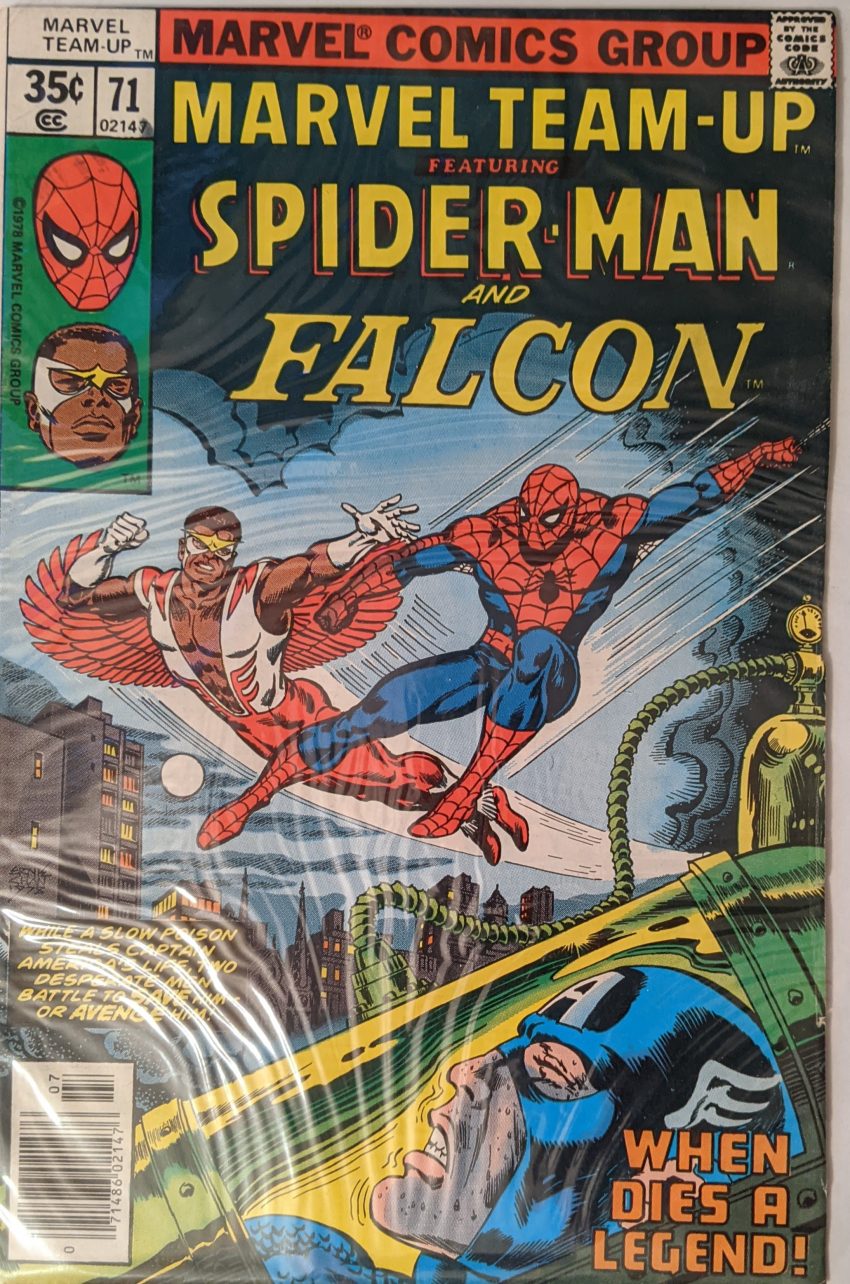 (One of 77) MTU 69’s letter column said that, while the details were up in the air, if things worked out right, MTU 71 was gonna be the craziest issue ever. Instead, we have what is clearly a fill-in. I’d be willing to submit that the Saturday Night Live issue in #74 was intended for issue 71, and then whatever caused Byrne to leave this title got in the way. But all I can do is guess. This month, we got… uh, we got Bill Kunkel and Dave Wienzel bringing you our story, with inker Dan Green. I know who Dan Green is, I never heard of these other two guys in my life. Maybe they won a contest. If you think I’m gonna google it, you’re wrong! It’s chaos from page 1:

Cap’s laid out with a flower in his hand, which Falcon takes for an intentionally placed clue. So… Cap called him on a phone, walked outside with a flower, and got got? Weird. SHIELD shows up, Cap is rushed to a hospital, and a doctor tells Nick Fury and Falcon that he’s dying.

MURDER FLOWER! Dr. Leroy Katz is a brilliant research scientist, who apparently told this doctor guy he was recently troubled by thefts at his government research labs. Why, that sounds like something SHIELD should’ve looked into. You dropped the ball, Nick, and now Cap is 100% definitely going to DIE! But where’s Spider-Man in all this? Well, funny story:

He is at the very same research lab that was robbed as it is being robbed again! Purple & pink is a bold choice for these nameless goons. Spidey gets to work on ‘em, and they don’t pose much of a threat. Until…

Professional superhero The Amazing Spider-Man, everybody. Just let some weirdo zap him like a chump. So, naturally, the goons escape in their van and that’s when Falcon shows up, assumes Spider-Man is robbing the research lab, and attacks him. Like you do. Gotta get that outta the way.

Falcon starts questioning the dude, and then we cut to Spidey on Long Island, where he rolls up to some fancy mansion the goon’s boss is meant to be in. Where’s, ya know, Falcon? Spidey takes out some of the guards and puts on one of their suits so he can get inside, and that’s where we encounter their boss. If you thought their color scheme was going to be a clue to who hired them… well…

“You really love this stolen government nutrient, don’t you?” is something we can all only wish we had occasion to say in our daily lives. Yes, it’s Plantman, a villain who isn’t even Z-grade because he’s worse than that. Hooboy.

This is so ridiculous. Aaaaanyway, Spidey slips away and, in a nice bit of business, asks one of the goons his name, knocks him out, and then runs into the main room telling the Boss Arnie accidentally touched “Pretty Poison” and needs the antidote. They take it into one of the greenhouses, and that’s when Falcon comes smashing through the roof. Spidey swipes the anti-toxin and they… run for it? Why not just fly back out? Because they have to go fight the previously toured room of evil plants, of course. Not that that’s too hard.

Whoa, whoa, whoa! Plantman said the “D” word! It’s 1978, how did that get past the Comics Code Authority? I am scandalized!

This was… not the pinnacle of the form. But a comic got published, presumably around its release date, and sometimes, that’s the best you can do. The cover really makes you think Cap will play a bigger role than just being poisoned the whole time.