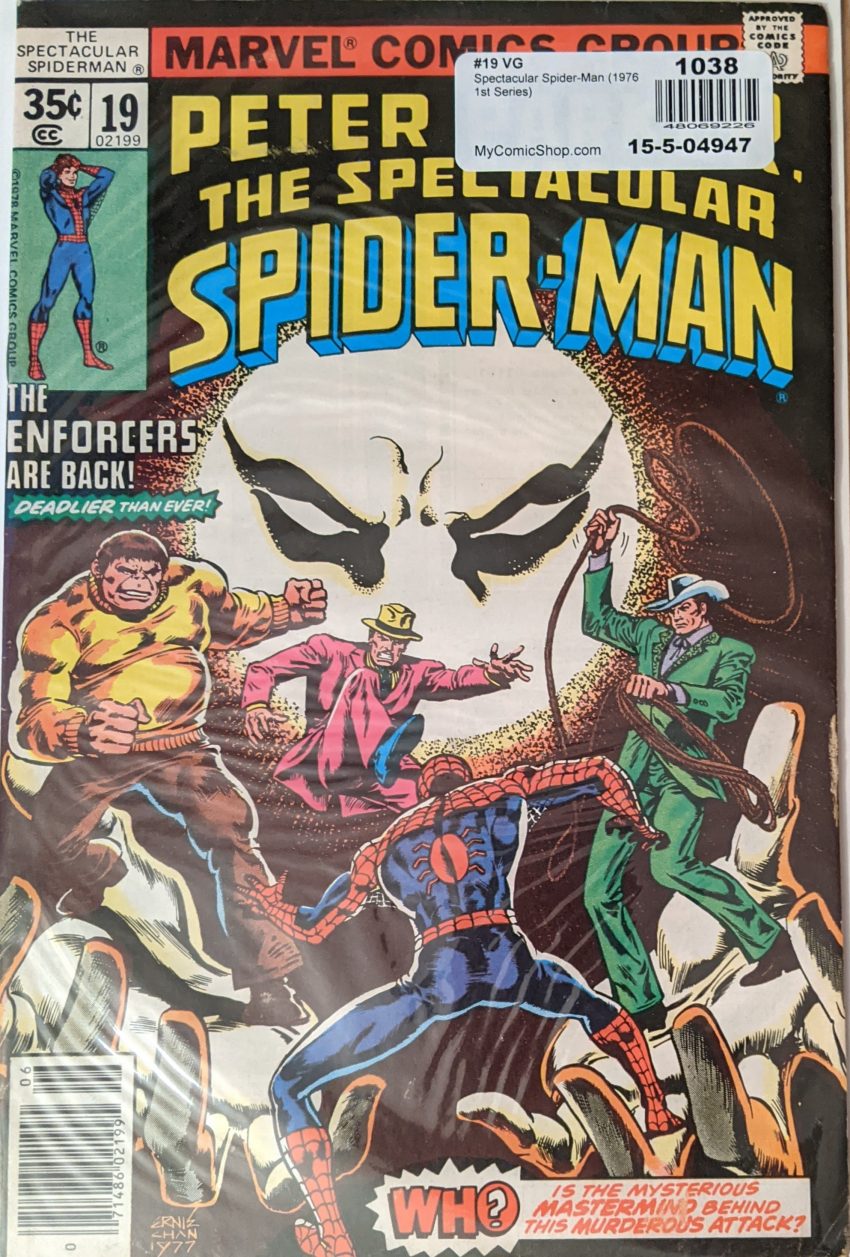 Stop trying to make The Enforcers happen! They’re a low-rent carnival act! Literally no one but Ditko could possibly make them work. “Deadlier than ever!” There was nowhere to go but up! But who pulls the strings? Well, by virtue of having read TAC 20 years ago, I already know. As expected, it’s Bill Mantlo, Sal Buscema and Mike Esposito inside. As we begin, The Enforcers have Spider-Man tied up in Montana’s lasso and Fancy Dan is kicking him around. I’m gonna assume this is one of those things where it’s a dummy or someone else so they can prove what they’d do if the REAL Spider-Man was here. Survey says:

“Against all odds, I found you a new big, dumb guy to replace your old big, dumb guy! Can you believe it? Me, Weird Featureless Shiny Man!” Next day, Peter Parker is in big trouble with JJJ for not getting pictures of the fight in TAC 18 (Because Iceman smashed his belt camera, as we may recall… or not…), and high tails it out of The Bugle. As he contemplates his usual financial troubles, The Enforcers travel to an undisclosed location, and Shiny tells no one in particular he’s the one who’s gonna kill Spider-Man.

The supporting cast! I have really been missing regular people in this block. Flash & Sha-Shan’s bliss is interrupted by The Enforcers busting in and taking the whole shop hostage to get Spider-Man’s attention. Of course, they don’t know that there’s already a superhero on the premises, but Holly won’t give Hector an opportunity to slip away and become The White Tiger. But Peter just happens to get off his bus here, sees the cops outside, and soon…

How, exactly, would you have covered the skylight, Dan?

Spider-Man knowing he can rely on Flash in a pinch is cool, and I like what it does for their relationship, Spider-Fan #1 getting to play sidekick to his idol, but it sure is happening a lot lately in this title. We’re low on pages and The Enforcers are dumb, so Spider-Man is having no trouble walking all over them for 2 pages as Hector really does just kick back and watch, seeing Spider-Man needs no help with these losers. Outside, Holly has let the authorities know Hector is still in there, working everyone into a panic, while inside, Spider-Man makes Dan & Montana smash headfirst into each other and pass out. Ox decides to throw the bar at him.

Lightmaster! Not seen since TAC 3, and for good reason. But the angle of him thinking Hector is Spider-Man is pretty good. We’ll see how that pays off next issue.