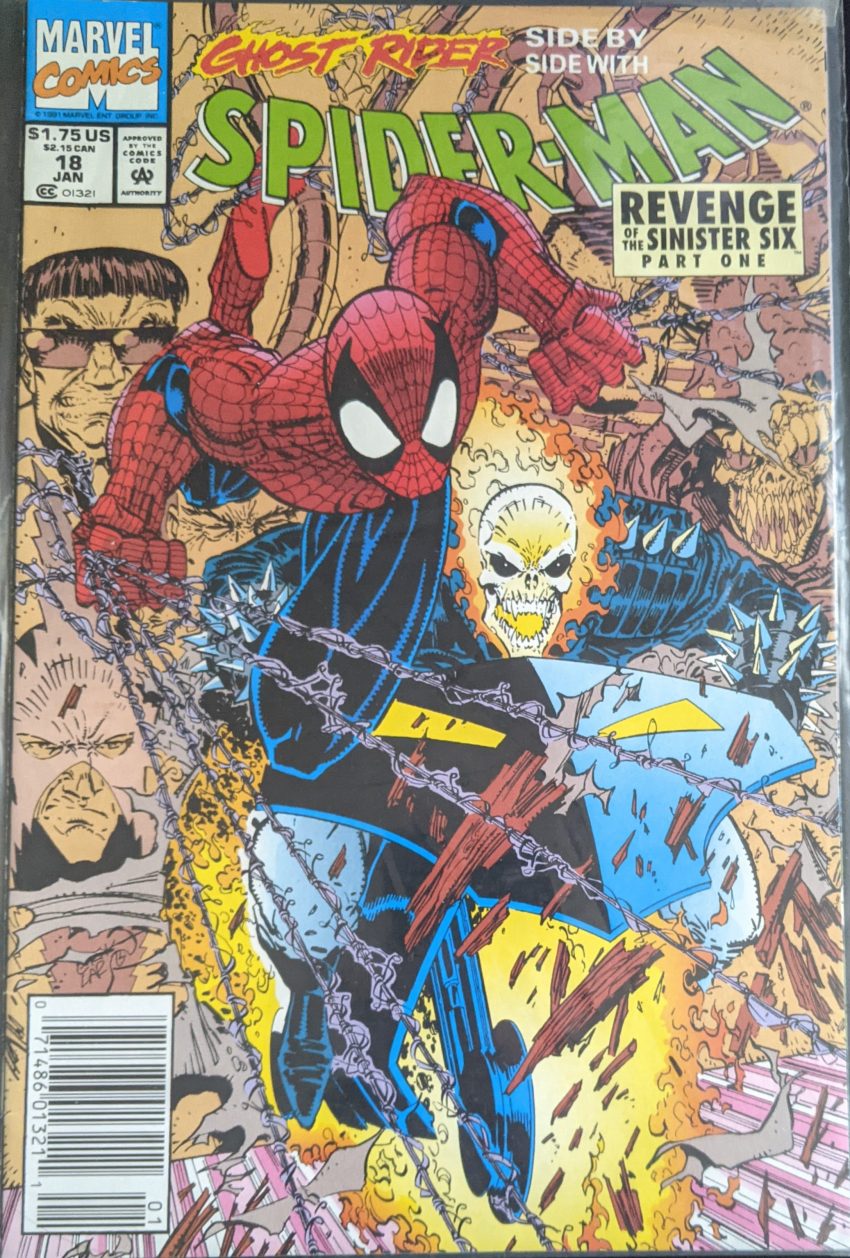 Yes, another 6-part story. Yes, another story full of guest stars. A crazy year for Spider-Man as comics really start to change. Erik Larsen is obviously back and ready to follow up his own ASM summer bi-weekly event from last year. He joins the rest of the team McFarlane left behind, and he kicks this issue off with Spider-Man leaping toward a robot-y lookin’ guy.

A 2nd Twin Peaks reference from the webslinger! And that guy? Well, much like the woman in SM 15, that guy’s a trial run for a Savage Dragon character, Superpartriot. Just imagine this guy with more stars and stripes and less disorientation.

Larsen so clearly has a better handle on Spider-Man than McFarlane did. Everyone can’t help but put their own sense of humor into him, but this still feels like the “real” Spider-Man. He’s not just whining about having to fight or asking no one in particular what’s happening. The renegade cyborg unloads a barrage of weapons, barley missing Spider-Man, then takes off on rocket boots into the sky. Spider-Man never stops babbling as he webs onto the guy’s foot and is taken for the ride. Then Ghost Rider’s bike whips past them in the air and GR launches onto the cyborg.

I still sometimes think of GR as “Ghost Toasties” because of this page. Spidey wonders if they’ll ever know what just happened. GR says innocent blood was spilled and has been paid for. Spidey says maybe all that really happened is an unintelligible innocent was just killed. But as the heroes leave, we see the cyborg dig up out of the rubble, so we’ll probably never see him again or anything. We take our scene to the home of The Casadas, whom Sandman used to live with, and which he is watching from the street. He thinks to himself Doc Ock threatened to kill them if he didn’t go along with the scheme in ASM 334-339, and since he didn’t, he checks on them from time to time. And then the house explodes. A horrified Sandman runs forward, digs through the rubble, but it’s too late. He swears revenge on Doc Ock. Speaking of whom…

For the first time, Ock’s viciousness is really graphic. The 90s! But, I mean, this comic has continuity, everyone’s in character… it’s a mile from McFarlane’s run in terms of quality and it’s only half an issue. Ock revels in his new power as he shreds a whole army of robots, but then begins to think about how even this isn’t enough. He’s once again out for world domination, and as he loots tons of weapons from whoever that old guy was, he thinks he’ll need some troops.

Goodness, MJ being objectified? Wouldn’t that be terrible. I can’t imagine it, but it seems like it’d be really crass! I wonder if Larsen was even aware of what he was doing here. I really can’t guess. As a storm brews in the Parker home, The Sinister Six-Minus-Doc-Ock has gathered. Despite Sandman still not wanting to be a crook anymore, he’s decided to throw in with them because they all want revenge on Ock for their last get together. Sandy didn’t care until Ock blew up the house, but now he’s in for it. He leaves to go see Mrs. Casada in the hospital. It sure seemed like everyone died before, but I guess not! Larsen is still a new writer, after all. These scenes are just kinda whipping by. Sandy wants his revenge, but he doesn’t trust the others, and thinks he needs a backup plan. Meanwhile, that backup plan is swinging around, thinking that even after all these years, being called a “square” really gets to the lonely nerd inside of him. His swinging takes him by The Bugle, where Sandman is standing on the sidewalk waving his giant sand hands, saying he hoped being here would help him find Spider-Man. He explains the deal. Spidey says he can understand the others doing this, but “what did Roy Orbison’s evil twin do to you?” which is a joke I still like. Sandy says Ock hurt his friends, and then we cut to the Sinister, uh, Five already invading Doc’s hideout. And he knows it, of course. Spider-Man watches from the rafters as the confrontation unfolds.

Who could that big shape be?? Could it be next issue’s big guest star? Probably!