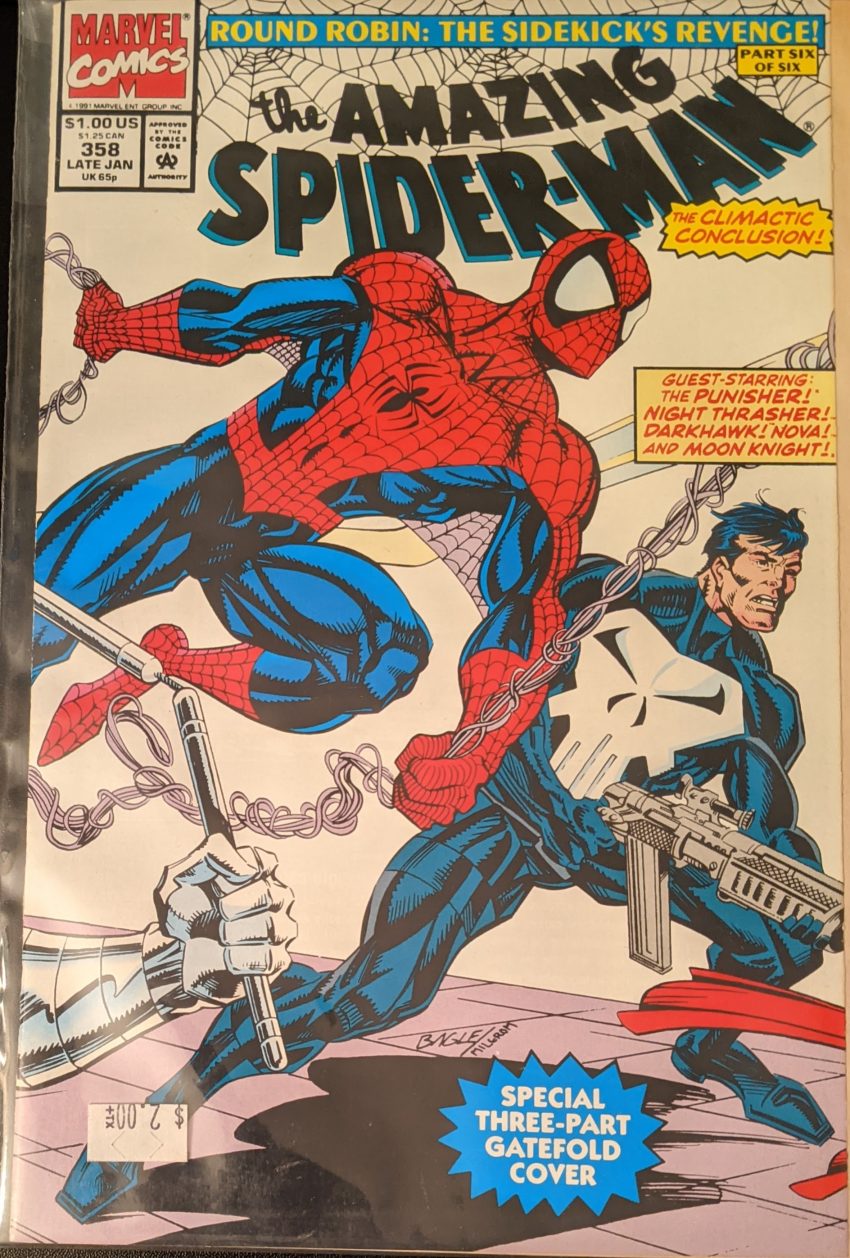 As we bring it on home, Milgrom can’t let this whole thing go by without contributing to the art, so he gets to ink this gatefold cover. I like the rougher, scratchier quality he brings to Bags’ pencils. This is the 3-part gatefold cover, for some reason, like Bags didn’t already have enough to do.

And not the last tri-fold cover on the last issue of a 6-part story in this block, even. It’s another splash page into 2-page spread opener as the 2 sides square off and then mix it up. Then, in the middle of what could pretty effectively be termed a warzone, Church decides to tell her origin story.

Hey, my Number One guess wasn’t totally off base.

The heroes start beating the bad guys so easily they have a chance to stand around and remark on the situation when those dopey “Seeker” guys turn back up from back in ASM 355. So now there’s 2 cyborgs and 4 power suit guys for the 6 heroes to contend with. The one who almost killed Punisher with the “energy leech” is annoyed he lived and trying to finish him off as Spider-Man calls him “you big noise!” I guess even Al is running out of gas after all this. Then Midnight tries to shoot Spidey with a freeze ray or something, our man dodges, and he freezes “Sonic’s” power suit. So solid Punisher taps it with a knife and shatters it. Then he doesn’t kill the guy revealed inside despite that being, you know, his thing. One of the other one zaps Frank and then gets Nova in a “shock net” as Nova smashes into him.

Midnight goes to rehash his beefs with Moon Knight yet again and is about to kill him when, guess what, someone webs his hand. It’s Spider-Man! Crazy, right? Midnight’s strong enough to punch his hand forward and cause Spidey to go sailing through the air, and then Church smashes into him while he’s caught off guard, but he doesn’t stay that way.

Midnight is horrified that what was done to his badly injured form, Church allowed to be done to her just because. Which is kinda flimsy, but I’ll allow it because I don’t ultimately care. So he turns on her, and she reveals she has that pain inducer thing and she didn’t disable it, just had the frequency changed so hers controls him instead. Then Dr. Franklin decides to hop in and try to get that thing so he can control Midnight.

Are these two named after Jeff Lynn? I could see that happening. As the place starts coming down, the various heroes pick up all the unconscious people they can and run, soon to find themselves staring at a big pile of rubble that used to be the Secret Empire base. They assume the cyborgs and Thunderball must have died.

1991 teenage Darkhawk talking about “settling their hash” is tip top.

Well, that was pointless! Sheesh. I keep thinking lil’ 13-year old me really nailed it skipping these. These bi-weekly summer events were a pretty dumb idea. Forcing your artists to cram like this doesn’t result in great work. But this one was particularly bad. But that’ll do it for ASM in this block. This block is closing out on three 6-parters in a row, and we proceed to the 2nd one next time.