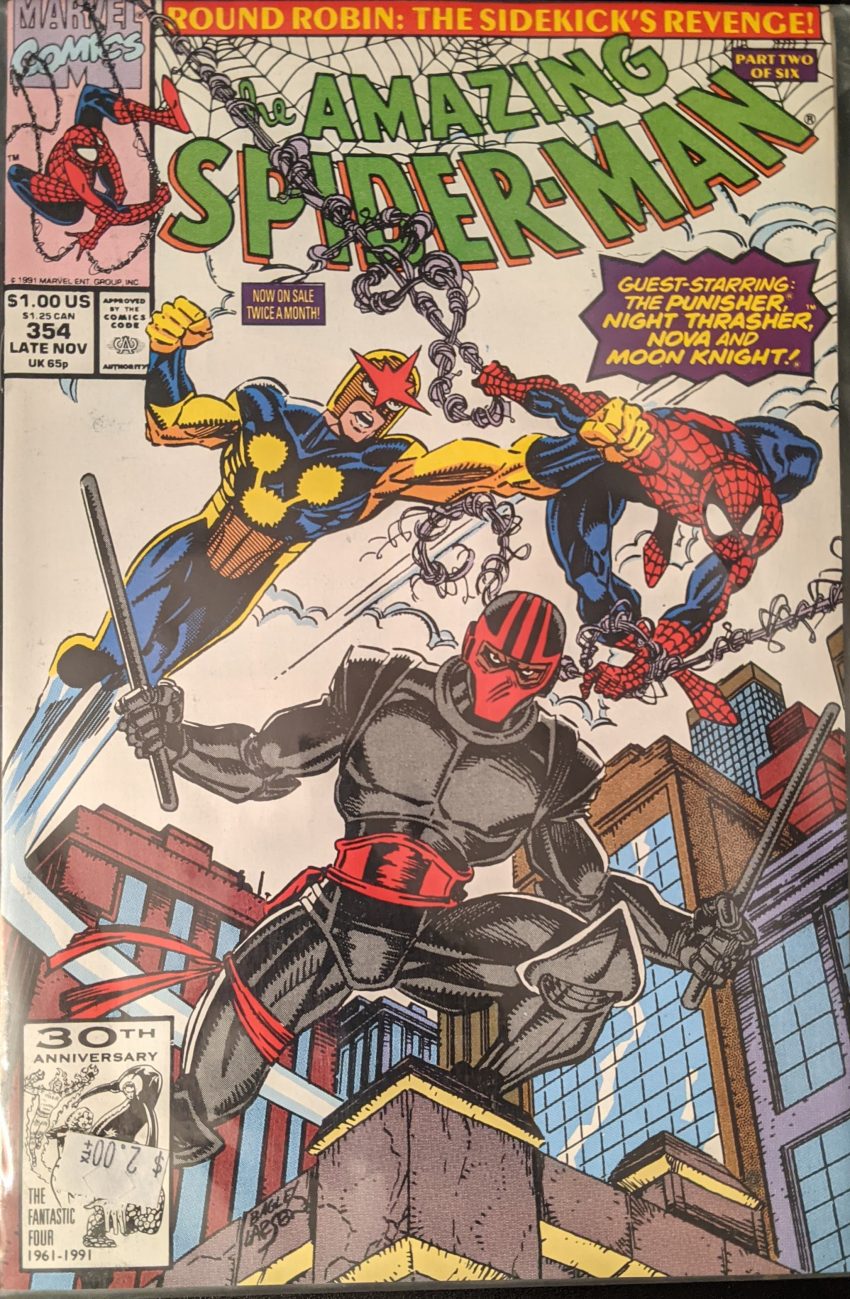 Interestingly to me, the remaining 5 covers to this event each feature inks by a different famous person. First up, Erik Larsen. It’s an interesting synthesis between two guys I think had a lot of similarities at this time. Larsen’s hand seems most obvious in Spidey’s eyes and webs. And it’s still Milgrom at the helm. I guess I assumed it would be, it’s just surprising to me that the big summer event was farmed out. I mean, no disrespect to Al, but why wouldn’t the regular writer do this? Just didn’t want to? I dunno. Weird. At any rate, that flying platform’s about to smash that old lady from last issue.

There is literally no way all that was faster than shooting a web.

So he can’t hit the dumb disc, but he can grab dozens of falling rocks! How silly. The heroes land on a nearby roof and Spider-Man tells Darkhawk his origin, minus any identifying details, hoping to steer him on the right path as a superhero. He says he’ll think about what Spidey says and takes off. Spider-Man grabs his camera and heads back to Aunt May’s house. May didn’t even have a chance to worry about him being gone so long due to being enthralled by a steel cage match. MJ can tell something’s up with him as they leave, but doesn’t press. They head down to The Bugle to see Robbie…

I guess! Speaking of Midnight, we check in with him delivering Dr. Franklin to The Secret Empire, where he is berated for making a scene and very mad about it. They ask if maybe the rest of The Wrecking Crew would be up for becoming cyborg slaves, and Franklin says no. He also suggests his fellow baddies are too unpredictable, and suggests they try to turn impressionable young hero types, such as Nova. He sure was specific! Elsewhere in the compound, Midnight rages about his various problems to a nurse Lynn Church, recapping how he got here and so on.

You have to assume this guy talking with no lips is not as dramatic as the creators would like, especially trying to say words like “moon.” This is a lot of business that has nothing to do with Spider-Man to serve as the core of a Spider-Man story. We take our leave of those 2 to find Punisher’s man-in-the-chair, Microchip, letting him know The Secret Empire sprung Franklin, and Frank is typically furious, but he’s about to shoot up a bunch of drug dealers, so he’s gonna have to be mad later. Meanwhile, Spider-Man’s gone to Avengers Mansion to see if they can get him in touch with Moon Knight, since he’s a reserve Avenger and Moony is a former West Coast Avenger. Captain America’s got it under control.

Come on, Nova, don’t be dumb. MJ follows a trail of discarded clothes to the bathroom, where Peter left the skylight open. Hope it doesn’t rain! He’s on the trail of Midnight, of course, and lets Moon Knight know via the Avengers communicard Cap reminded him of before. Moon Knight says he’ll be right there, and tells him to leave his communicator on so he can follow the signal. Handy. Meanwhile, Midnight’s working hard to sell Nova on becoming a dupe. Nova decides to play along to see what’s really going on, but flies them over New Warriors headquarters and activates an emergency signal in his helmet to make the team’s leader, Night Thrasher, come after him. But then…

Night Thrasher. A guy whose superpower is… a skateboard and some batons.

Moon Knight has a costume that couldn’t work outside of comics. It’s “dark white.” Some people make it silver, but look at him. Somehow always deeply shadowed, even in broad daylight, in white. This story is really crowded. And not terribly Spidey-centric. Young me was right to skip it given his budgetary constraints.