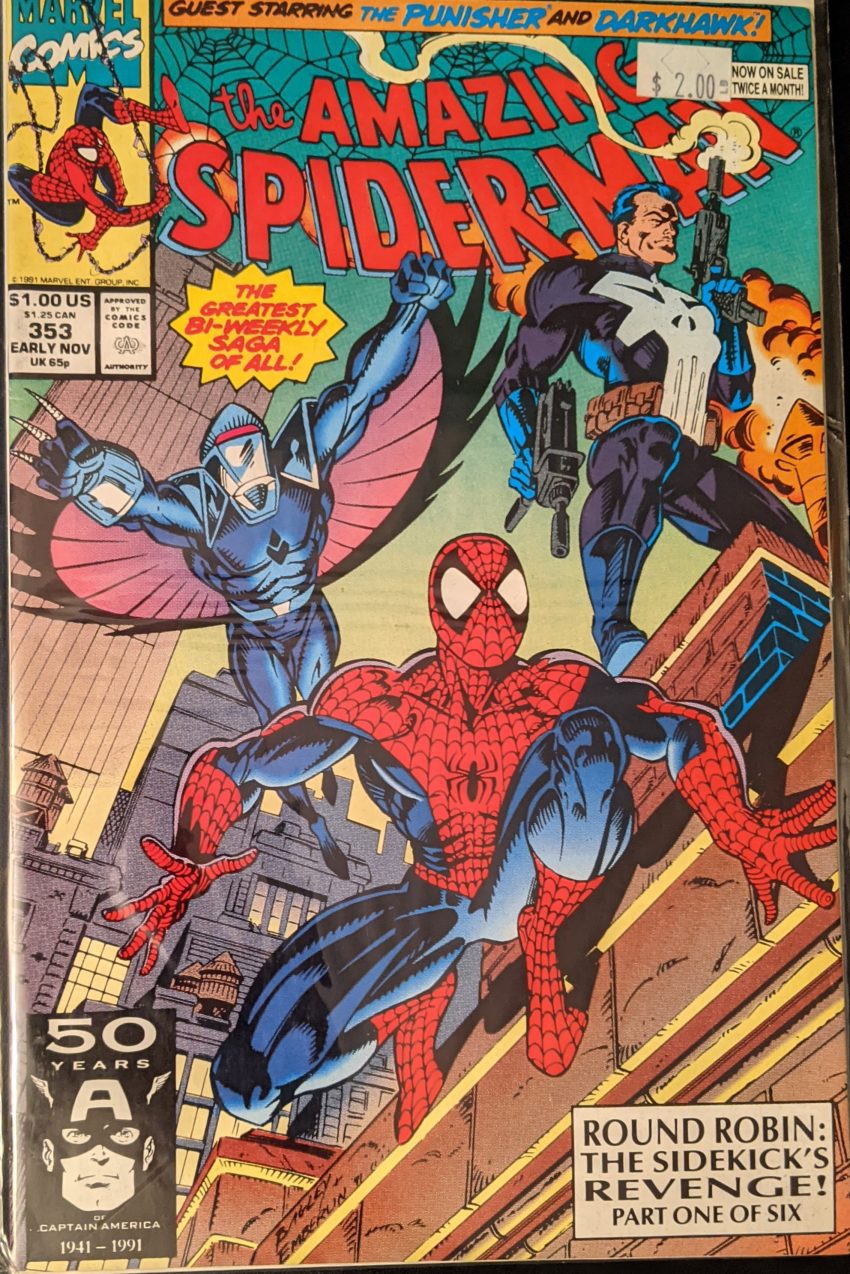 Time for ASM’s bi-weekly summer event. And… I skipped it. Yup! First issues of ASM I didn’t buy on purpose since I started buying comics. This 6-part story, sold in 3 months, with a really bizarre double-Batman reference in the name that, even at 13, seemed super weird, and which, as we’ll see, quickly becomes bloated with guest stars, seemed easy to pass on. Saved myself $6 at a time when that was a lot. Left more room in the budget for X-Men, which I was also trying to follow at the time. And I was still buying the concurrent issues of adjectiveless Spider-Man, so it’s not like I quit cold turkey. I eventually got the back issues, I wanna say in college, after I’d gotten all the Stern/Romita books. Sure can’t say I remember anything about them, tho. Either this’ll jog my memory or be new all over again. Oh, weird, this is written by Al Milgrom. Is he doing the whole event? Mark Bagley, Randy Emberlin & Bob Sharen remain in place. Al starts off on a very Michelinie note on the splash page, as we see a guy beating up martial arts guys as leaders of The Secret Empire watch. Have they been on the blog? One of Marvel’s many secret societies trying to take over the world. They do it in spooky robes with numbers on their chests, tho.

Jeff Wilde! So this is a sequel to a Moon Knight story I’ve never read? That’s not nice. But, you know, Moon Knight is a Batman analog, and this guy was his Robin, and now he’s an evil cyborg, so Round Robin: The Sidekick’s Revenge. Wah wah.

This simply must be shown…

I am really taken aback by Pierre The Mammoth. That is hilarious. Spidey swings over Midtown High and remembers his team-up with Darkhawk, as seen in Darkhawk 2 & 3, and then we switch to following Darkhawk himself, Chris Powell, as he recaps his origin on his way into the police precinct his dad used to work at. He’s there looking for info about his missing dad when Midnight comes crashing through the wall. This is where Eliot Franklin is being held. Aka Thunderball, last seen on the blog in ASM 248, the smart one in The Wrecking Crew. Midnight makes short work of the assembled cops, we get told Franklin no longer has his powers just before Midnight springs him, and they’re on their way to a clean getaway until Darkhawk dives into them, smashing them all out a window.

People say Spider-Man’s jokes are corny, but Milgrom’s take on Darkhawk make Spidey seem like the best comedian who ever lived. We cut away from that fight to The Punisher trying to get info out of a guy in an alley. He’s looking for information about, guess what, The Secret Empire, and has just learned they want Eliot Frankin to beef up their weapons. He shoots his guy and explains to us his deal. So many people in this comic are just explaining their deal. Then it’s back to Darkhawk vs. Midnight as Spider-Man arrives on the scene. Setting up his camera, he’s not sure whose side he’s on. He wasn’t too thrilled with Darkhawk in their last meeting, after all.

Darkhawk uses the distraction to take out one of the flying platforms and move onto another one as Spider-Man yanks one down out of the sky. But that leave him open to a recovering Midnight, who manages to whack him in the head a couple times.

Spider-Man explains he was there when Jeff died (No idea when that was, and weirdly, there’s no footnote), and then Jeff re-explains he’s a cyborg now even though that was explained earlier. Then he goes on to say he didn’t want to work for The Secret Empire, but it’s better than Moon Knight, who he feels abandoned him and betrayed all he stood for. Darkhawk thinks that reminds him of his own dad, and is startled enough to let his beam down.

Oh no! Those people are dead for sure! Surely there won’t be a last minute heroic rescue or something! This book is already pretty crowded, and it’s only begun. “Wilde At Heart” is a very Michelinie title. I’m curious to see if this is all Milgrom or not.