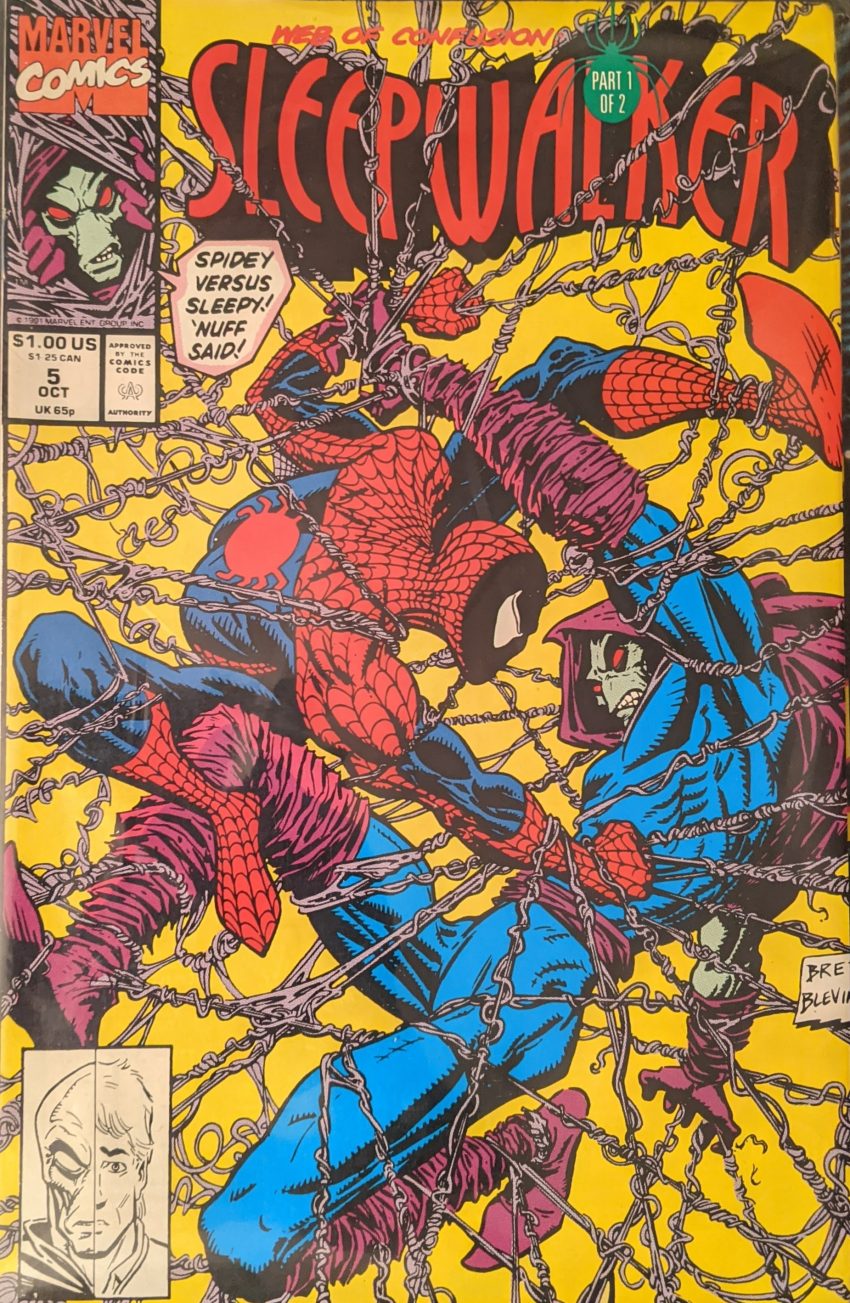 The 90s, man. While most new characters tried out in this period tended to be an attempt to cash in on what the soon-to-be Image guys were making popular (Read: Big, mean dudes with big, mean shoulderpads and big, mean guns), sometimes something truly bizarre snuck out. And so you get Sleepwalker, a being from a race of “dream cops” that protect the unconscious who, upon getting trapped in the subconscious of college student Rick Sheridan, now enters our plane of existence when Rick falls asleep to explore our world. And fight crime. I mean, as new superheroes go, that’s pretty wild. I got Sleepwalker #3 in the oft-referenced box of comics that gave me a taste of many Marvel titles, and it was my first exposure to artist Bret Blevins. I would later find out he’d done some work Around the X-Office prior to this. His stuff was unique while not being as “loud” as the Image guys. And here we are, at issue 6, when our man appears. I have had issue 7, part 2 of this story, since I was a lad, but just got 6 for this. Blevins is joined by creator/writer and future Clone Saga impresario Bob Budiansky, inker Michael Bair and colorist Marie Javins. No disrespect to Bair, but Blevins’ stuff is most interesting when he inks himself, so that’s kind of a bummer, but maybe he was behind this month. We open on Sleepwalker spying on Spider-Man, who is watching new mob boss “Crimewave” (What a name!) prepare for a meeting with Kingpin and all New York’s other bosses. Sleepwalker is intrigued by this weird dude he just happened upon by chance, still not well-versed in the ways of Earth.

So, that’s Sleepwalker. Why does he only have one sleeve? Why does it seem like Blevins never draws him with just one sleeve, but someone’s making sure it’s colored that way? I may never know, but that’s how it is in every issue I’ve seen. He wraps a billboard around Spider-Man with his weird eyebeams as Spidey protests that he’s a good guy and the villain is getting away, so Sleepy drifts off to investigate. Spider-Man shoots a tracer at Crimewave’s car, but doesn’t notice that it hits Sleepwalker instead while trying to flee himself. As the mobsters catch sight of Sleepwalker, Crimewave pops out of their sunroof to lob a grenade at him. This guy just keeps grenades in his limo? Sleepwalker can survive the explosion, but it stops him for awhile. Spider-Man, meanwhile, has freed himself, but has no idea where anyone went and just heads home, thinking he can use his tracer to find the secret mob meeting tomorrow. Sleepy returns to Rick’s apartment, quickly draws a picture of Spider-Man with “Good? Evil?” written under it so Rick can tell him more, and vanishes as Rick wakes up. This makes the spider tracer fall on the floor and get the attention of Rick’s dog. Rick wonders what is ethereal pal has to do with Spider-Man.

Not friends yet. Meanwhile, several black-suited people rappel down onto a yacht where a charity fundraiser is going on and rob it. Soon, Spider-Man’s on the scene, and seeing people floating by in lifeboats, tries to investigate. They tell him they’re ok, but the thieves are getting away with the boat. He tries to swing out to said boat, but it’s too far from the bridge he was hoping to find Crimewave at. He’s about to fall into the drink when…

The leader of the thieves turns out to be Crimewave’s contact from earlier. She reports in that Spider-Man and some thing are onboard, and he says to bring them along because he has a surprise. This turns out ot be a rocket launcher, which he just fires at the boat without giving his own people time to flee. They and Spider-Man and sleepwalker all scramble overboard as the boat explodes. Carmela, the leader, drags herself up onto the dock, grumbling that Crimewave wouldn’t care if she survived or not. He says if she hadn’t been smart enough to see what he was planning, he didn’t need her. Guy seems pretty bad at this crimeboss thing. He has his goons fish an unconscious Spider-Man out of the water.

Things look bad for our heroes! We’ll have to see how they get out of this next issue.