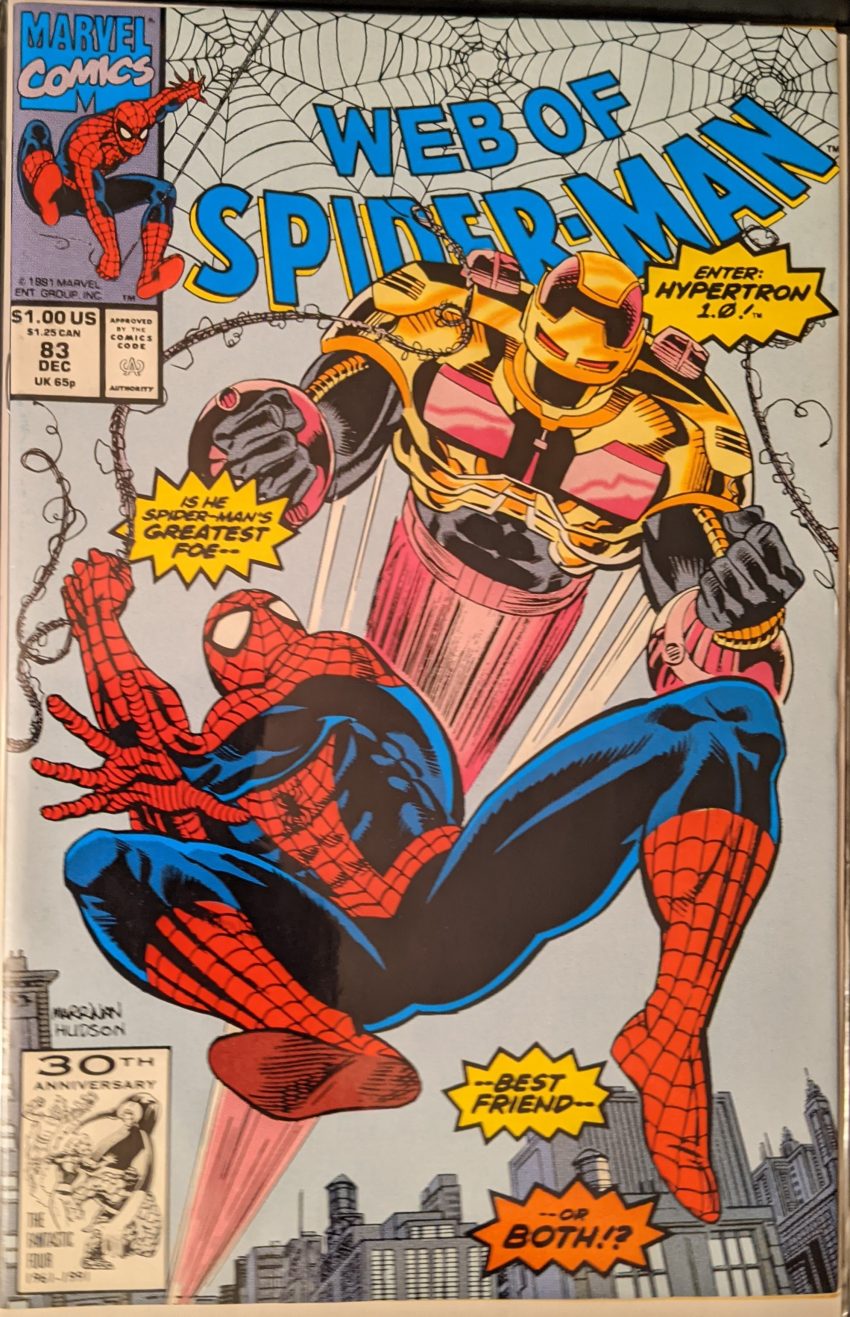 Good idea trademarking timeless new villain Hypertron 1.0. Shrewd. Yes, Kurt Busiek is back for another one-and-done. This month, Chris Marrinan is on interiors as well as the cover, with Don Hudson & Bob Sharen hanging in there.

Marrinan has not yet started doing the pretty aggressive Erik Larsen impression I am more familiar with. And this stuff looks pretty good, I must say. Hang on, look at this…

This guy controls his suit with cassette tapes? Is this the weirdest villain ever? Spidey leaps onto the villain while he’s messing with the webbing, but then “Hypertron’s” unseen buddy tells him to use still another feature, which blasts Spider-Man across the alley… where he’s met by Bob, who just tries to start up a conversation like a super-fight isn’t happening. An understandably confused Spidey shoos him away before swinging off after Hypertron, who’s flying away. Bob follows by car below, causing a lot of trouble as Spidey webs up the villain’s backpack, causing him to overheat. He and his unseen buddy agree to drop the loot to keep Spider-Man off him while he escapes. Spidey webs up a big funnel to catch all the money as Hype lands in a nearby alley and tries to make a run for it. But guess what?

Timmy, Myron and Chester: Supervillains! Elsewhere, Spider-Man is perplexed, unable to find that harness. And Bob has just gotten it home He infs the operating system is very easy (A six-year-old could run this thing!”) and welds a wire-mesh over the intake Spidey gummed up before, declaring himself in business. The fellas bail Chester out of the clink, and their tracking device tells them the harness is moving again. And it is, as Bob puts a floppy disk called “Aerobatics” into and takes of (Tapes AND floppies?).

I thought he just took the harness, how’d he get a whole suit? After dinner at May’s, Pete & MJ watch the news, and Peter manages to make his encounter with Bob an excuse to recount his origin to himself, thinking he was a lot like the guy back when he was out to get rich. Then he sees Bobpertron on TV and rushes off with a weak excuse. MJ tries to cover, but Aunt May says she knows he’s really going to take crime photos, and makes excuse to protect her.  Pretty close!

What’s dumber, Bob or the way this suit works? Science may never determine the answer. Right about then, Spider-Man lands on Bob, still thinking he’s the bad guys. As he brings him down, he learns the truth, just in time for The Three Stooges to catch up to them, guns blazing. Spidey tells bob to get to safety and goes at them, smashing some of their gear and webbing one of them to his seat before getting zapped.

Spidey webs the thing holding him out from under the doofuses and breaks it as Bob descends to unleash “the negative vortex,” which sends the nerds into a panic, saying it will kill them all..

Wacky stuff. Rather incredibly, this is not the last we’ll see of Bobpertron. But it is the 2nd-to-last. As the blurb indicates, the regular Web art team is back with new writer Howard Mackie next issue. But before we see that, we’ve got other stuff to look at, starting with… something else entirely. Things get weird next post.